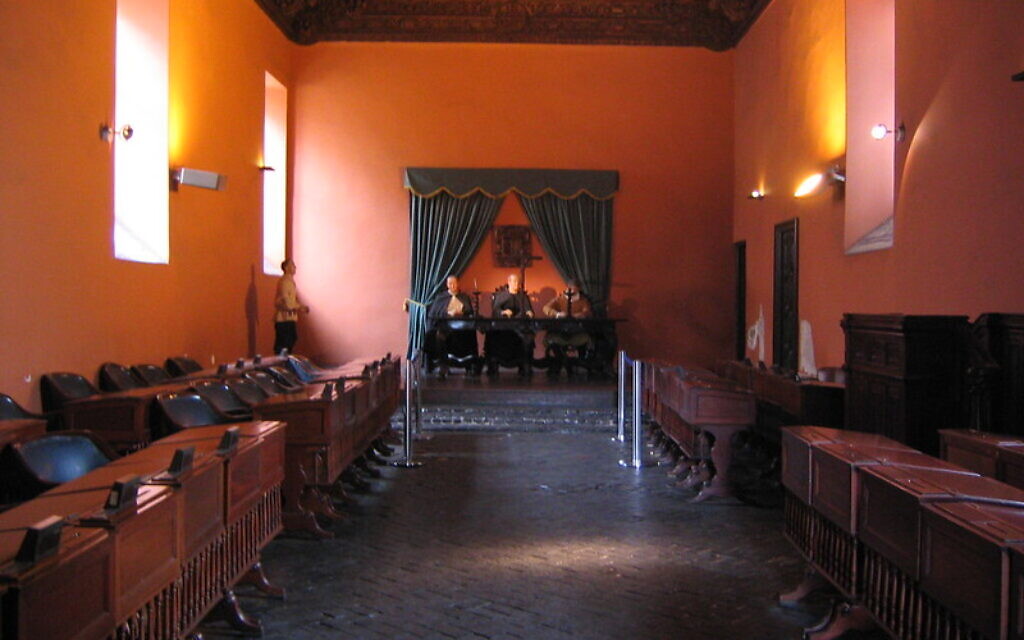 The Museo de la Inquisición,, used by the Spanish Inquisition between 1570 and 1820. Photo by Phil Whitehouse.

It was more than a decade ago when Rabbi Stephen Leon, rabbi to the B’nei Anusim in the American southwest, introduced a resolution at the Conservative movement’s convention that would have a lasting impact on Judaism worldwide. Rabbi Leon believed that mainstream Judaism had an obligation to welcome the descendants of Spanish Jews who had suffered persecution during the Inquisition.

Back then no one could have predicted the turn of events that Rabbi Leon’s resolution would have. In fact a scant six years later, in 2015, Spain and Portugal passed bills enabling descendants of exiled Sephardic Jews to acquire naturalized citizenship, finally acknowledging the immense social and economic damage the expulsion had upon the lives of their Jewish citizens.

Historians document that during the late 15th and early 16th centuries, hundreds of thousands of Jews were expelled from Spain and Portugal. Those Jews who remained in their native countries often were subjected to forced Christian conversions and then, when accused of “Judaizing” in secret, these Jews faced arrest, torture and the dreaded “auto-da-fe” — burned alive in the public square.

Spain was the first to acknowledge its culpability and the first to attempt to set things right. Portugal followed suit, and today the “law of return” for the descendants of Sephardic Jews who were persecuted by the Inquisition has resulted in naturalized citizenship for thousands of B’nei Anusim eager to reestablish their rightful place in a society that, 500 years ago, ruined their lives.

In October 2019, researchers Arielle Goldschläger and Camilla Orjuela reported that “153,767 descendants of Sephardic Jews had applied for citizenship in Spain and by mid-2020, more than 62,000 were reported to have applied in Portugal.”

Yet phenomenal as these numbers might be, the statistics do not tell the whole story. That’s because the persecution of the Jews did not stop at the Portuguese border. In fact, thousands of Jews desperate to avoid Portuguese persecution made their way to the island of Sicily, the Aeolian Island chain and eventually to Italy’s mainland, to the region of Calabria, the “toe” of the Italian “boot.”

Unfortunately, with the Inquisition authorities in hot pursuit, these Sephardic Jews suffered a similar fate as had their co-religionists in Spain and Portugal. Thousands were murdered, their synagogues were destroyed and their family’s wealth and property confiscated. And just as it happened in Spain and Portugal, the relentless persecution of southern Italian Jews had devastating effects morally and economically as well.

Professor Vincenzo Villella in his book “Giudecche di Calabria” (“The Jewish Quarters of Calabria”) quotes renowned Italian historian Oreste Dito who, in 1916 wrote, “From the expulsion of the Jews in Calabria, what happened was, to a lesser degree, the same as happened in Spain itself. From the economic and moral decadence [of the persecution] came a general misery. The population decreased, the inhabited centers decreased, the flourishing marinas were abandoned to piracy, to malaria and to starvation. The Spanish government was thus able to dominate southern Italy for two centuries that [resulted in] driving out the Jews and the subsequent complete ruin of Calabria.”

It is no coincidence that the day of intense mourning and fasting, Tisha b’Av, coincides with the exact Hebrew date when the expulsion of Jews from Spain began in 1492 — a persecution that continued unabated for nearly a century, resulting in the Jews living in Sicily and Calabria suffering the same fate.

The time is right for the Italian government to examine the law of return adopted by Spain and Portugal and to begin a process to enact Italy’s own law of return for those whose southern Italian heritage includes Sephardic Jewish roots. An Italian law of return for Calabria and Sicily’s B’nei Anusim seems timely, appropriate and the right thing to do. PJC

Originally from Pittsburgh, Rabbi Barbara Aiello is the first woman and first non-orthodox rabbi in Italy. She opened the first active synagogue in Calabria since Inquisition times and is the founder of the B’neio Anousim movement in Calabria and Sicily that helps Italians discover and embrace their Jewish roots. This piece first appeared on The Times of Israel.