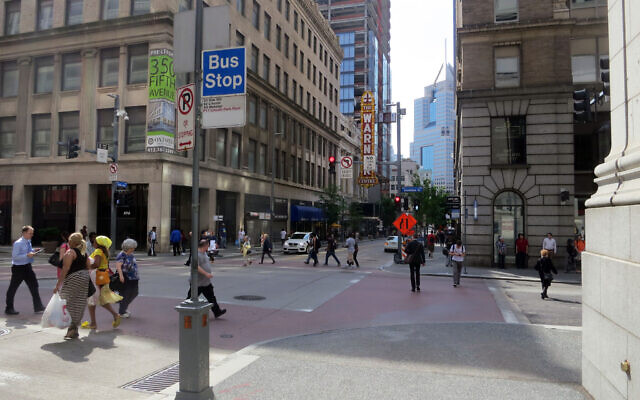 A Jewish developer from the Cleveland area is planning a multimillion-dollar rehab of the former Frank & Seder department store in downtown Pittsburgh.

Stark Enterprises is partnering with Launch Workplaces, a co-working concept company, to create new working spaces in the now vacant building on Smithfield Street. The developer also is concurrently pursuing other projects in Pittsburgh; Westlake, Ohio; and Woodmere, Ohio, with each of the spaces slated to open in 2021, the firm said.

The Pittsburgh Post-Gazette estimates the project could cost some $64 million to bring to fruition. The downtown building has sat empty since Stark paid more than $10 million to buy it in 2017. Two years ago, Stark obtained approval from city planners to rehab the site into three floors of offices, 25,000 square feet of retail and two floors of apartments, the Post-Gazette reported.

“Flexible office space will be the perfect addition to Pittsburgh’s newest downtown district, where mixed-use development continues to grow,” said Stacie Schmidt, the firm’s vice president of marking and communications. “The concept is truly looking ahead into the future and realizing what professionals and small businesses need to be successful.”

The proposed site — which Stark is dubbing “Smith & Fifth” — sits across the street from the former Kaufmann building, where mixed-use development, including the construction of a Target retail store, is taking place. Launch Workplaces is set to occupy about 25,000 square feet of co-working space inside the Smith & Fifth project, firm officials said.

Stark Enterprises officials say the company is proud to identify as Jewish. Stark Enterprises’ owner, Bob Stark, is Jewish and has a strong faith that carries to his son, Ezra, said spokesperson Danielle Gross, in a prepared statement.

Both men have been heavily involved with their congregation in Cleveland, and helped build Fuchs Mizrachi School, a pre-K-through-12th-grade private modern Orthodox coeducational college prep day school in Beachwood, Ohio, Gross said. The Stark family remains “heavily involved” with the school, the board and its community-wide initiatives and fundraisers.

“The company was built on strong values and roots of faith and family, which is instilled throughout the entire workforce the company currently employs,” Gross told the Chronicle. “Mutual respect, team work and dedication are values that the company is rooted on, and has been able to grow because of.”

Launch Workplaces, Stark’s partner, was founded in Maryland with the goal of providing productive spaces for professionals of all types — from growing entrepreneurs and small businesses to satellite teams. Offering everything from private offices and cubicles to large meeting rooms and collaborative lounges, Launch gives local communities “the tools and space to flourish,” officials said.

Launch Workplaces says it operates on four core pillars — hospitality, community, flexibility and integrity — and the Cleveland firm stressed these “go hand in hand with the mission of Stark Enterprises and the properties they create for communities.”

“Launch Workplaces is a co-working space that will provide local businesses, entrepreneurs, and satellite or remote employees a space in which to work and be productive,” according to Gross. “Whether that be with a team or alone, Launch creates functional and modern spaces to meet the needs of the current, on-the-go professional. Launch attracts businesses, thought leaders, entrepreneurs, and the new way of conducting business, so this along with the progression of the commerce district in downtown Pittsburgh will surely help attract new business and ideas resurging the city.” PJC