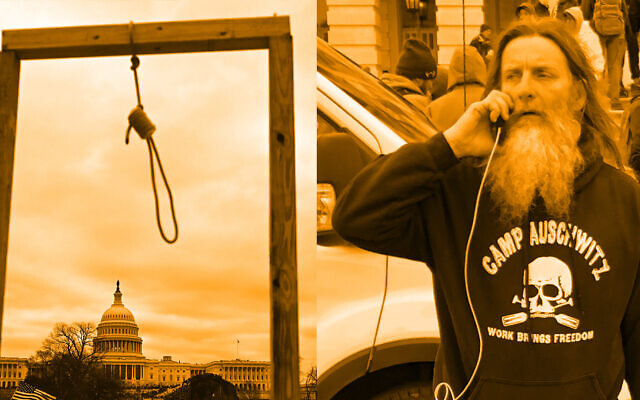 Two scenes from the Jan. 6, 2021, rioting: A noose hung by pro-Trump insurgents and a man wearing a "Camp Auschwitz" jacket seen on Reddit. (Noose photo: Andrew Caballero-Reynolds/AFP via Getty Images/JTA)

(JTA) — The sweatshirt, spotted amid the mob that stormed the U.S. Capitol, seemed designed to provoke fear.

“Camp Auschwitz,” it read, along with the message “Work brings freedom” — a rough translation of the message that greeted Jewish prisoners at the infamous Nazi concentration camp.

The back of the shirt said “Staff.”

A photo of the man wearing the sweatshirt was just one of the images of hateful symbols that have circulated from the mob, whose violence led to four deaths and wreaked havoc on Congress. Confederate flags and nooses were among the overt hate signs that the insurrection brought into the Capitol.

Other slogans — on flags, clothing or signs — were code for a gamut of conspiracy theories and extremist ideologies. Here’s what you need to know about them and the far-right movements they represent. 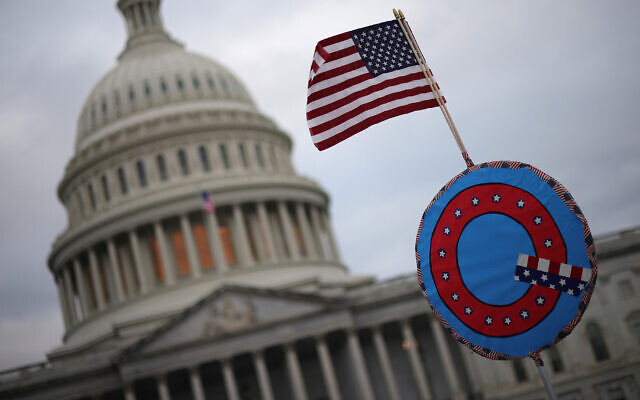 Several members of the mob wore or carried signs invoking the pro-Donald Trump QAnon conspiracy theory, which is laced with anti-Semitism. QAnon, which began in 2017 and has gained millions of adherents, falsely alleges that an elite cabal of pedophiles, run by Democrats, is plotting to harvest the blood of children and take down Trump. Trump has praised the movement and espoused its baseless ideas.

Here are some of the QAnon symbols present in the Capitol on Wednesday. 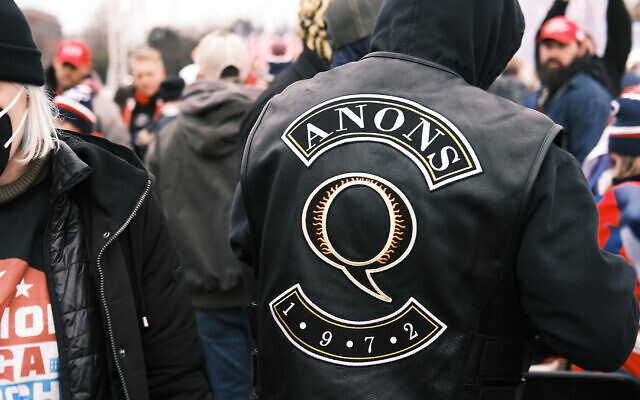 “Q” represents the purported high-ranking government official who shares inside information with QAnon followers through cryptic posts on fringe websites. QAnon followers often wear T-shirts emblazoned with a huge Q — and several of them were part of the Capitol mob. 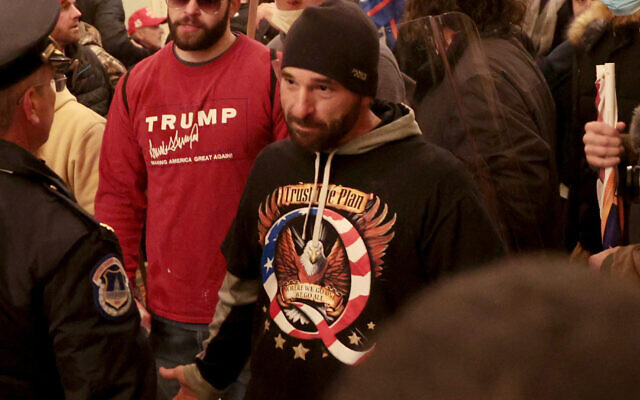 As Q’s supposed predictions have proven false over the years — including the election of Joe Biden, which Q predicted would not happen — many QAnon followers became disillusioned. Others told them to “trust the plan” and place their faith in QAnon’s theories. The phrase has become one of the conspiracy theory’s slogans.

“Trust the Plan” logos were also visible in the Capitol, referring to the “plan” QAnon followers believe is happening. 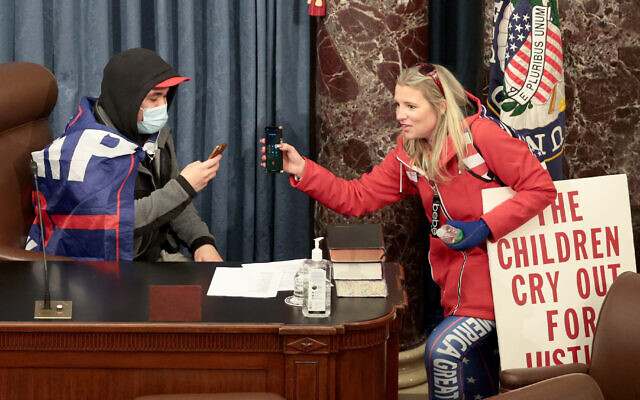 A protester sits in the Senate chamber, Jan. 6, 2021. (Win McNamee/Getty Images via JTA)

Messaging related to saving children is a core tenet of QAnon because it alleges a global pedophile ring. In the photo above, a woman carries a sign saying “The children cry out for justice,” referencing children who QAnon conspiracists falsely believe have been abducted by Democrats and progressives, including the Jewish billionaire financier George Soros.

Prominent Holocaust deniers and neo-Nazis were part of the Capitol mob. A far-right activist known as Baked Alaska livestreamed from inside House Speaker Nancy Pelosi’s office. Another extremist, Nick Fuentes, a white nationalist who leads the far-right Groyper Army, was said to be in the room with him. Fuentes denies this but was outside the Capitol on Wednesday.

The Neo-Nazi group NSC-131 also joined the insurrection, according to reporter Hilary Sargent. NSC stands for Nationalist Social Club and has small regional chapters in the United States and abroad. The 131 division is from New England.

Local New England Neo-Nazi group NSC131 is in DC, according to their own accounts. Let me know if you spot these guys in DC. (Pics to follow) pic.twitter.com/jhplbjfEzU

In a video, one participant can be seen brandishing a flag with what some Twitter users identified as a swastika, though it isn’t entirely clear. 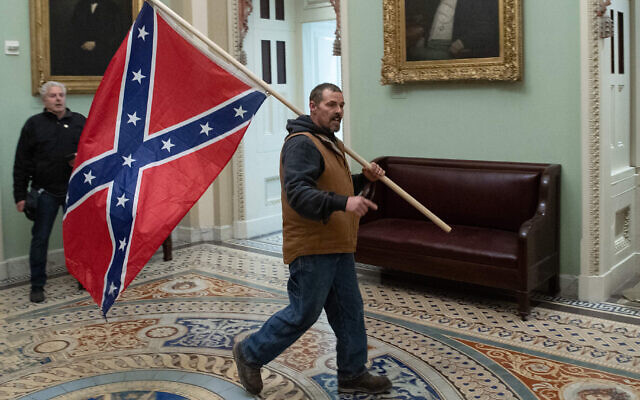 Other flags on display also were associated with long histories of white supremacy. At least one protester carried a Confederate battle flag into the Capitol building. Meanwhile, nooses — a prominent symbol of racist violence — were placed outside.

In one instance, after members of the mob started destroying camera equipment from The Associated Press, they made a noose out of the cords, according to BuzzFeed News reporter Paul McLeod:

They made a noose from the camera cord and hung it from a tree. pic.twitter.com/M9KC7odLAm 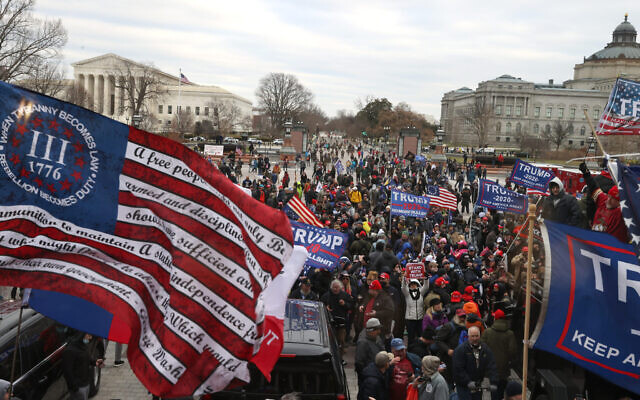 Protesters gather on the U.S. Capitol Building on Jan. 6, 2021 in Washington, DC. (Photo by Tasos Katopodis/Getty Images via JTA)

Flags bearing the phrase “when tyranny becomes law, rebellion becomes duty” (a version of a quote dubiously attributed to Thomas Jefferson) and the Roman numeral III also were seen.

Another symbol favored by militias is a coiled snake above the phrase “Don’t Tread on Me,” known as the Gadsden flag, which symbolizes support for gun rights and individual liberties. The symbol, emblazoned on a flag, has been used as well by the Boogaloo Bois, a loose affiliate of anti-government militias that comes armed to protests. They are known to wear Hawaiian shirts (not as yet seen at the march) or camouflage (which was very much on display).

The Boogaloo movement, which aspires to start a second Civil War, gained prominence last year when its members showed up to anti-lockdown protests and racial justice marches. At least one man wearing a shirt advocating for a civil war was present at the Capitol, though it’s unclear if he was an adherent of the Boogaloo Bois.

The Oath Keepers, an anti-government group like the Three Percenters, according to the ADL, were in D.C. and at a similar protest in Arizona on Wednesday. 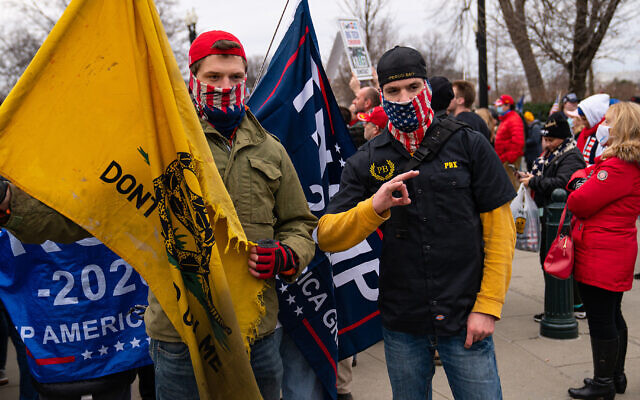 The “Don’t Tread on Me” flag favored by militias symbolizes support for gun rights and individual liberties. (Robert Nickelsberg/Getty Images via JTA)

Members of the Proud Boys, the violent far-right group that Trump told to “stand back and stand by” during a September presidential debate, wear black-and-yellow Fred Perry polo shirts along with red Make America Great Again caps. (Fred Perry, a U.K. brand, has said it would stop selling the shirts because of their association with the group.)

Proud Boys founder Gavin McInnes, who said he quit the group in 2018, was spotted in the D.C. crowd. The group’s current leader, Enrique Tarrio, was ordered to leave the city earlier this week after being arrested on weapons charges.

An earlier version of this article mentioned reports of a Proud Boys protester wearing a “6MWE” shirt, which stands for “Six Million Wasn’t Enough,” a reference to the number of Jews killed in the Holocaust. However, the Jewish Telegraphic Agency was not able to substantiate this claim, as the image circulating on social media appears to be from a Proud Boys protest in December rather than from this week. 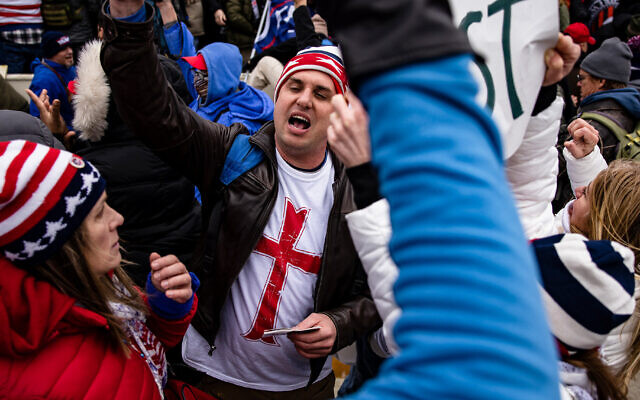 Trump supporters, including one wearing the Crusader cross, storm the U.S. Capitol following a rally with the president, Jan. 6, 2021. (Samuel Corum/Getty Images via JTA)

The shooter who committed the 2019 massacre at a New Zealand mosque appropriated symbols of the Crusades, and they’ve become popular with other far-right, ethnonationalist groups. The symbols, such as medieval-style helmets or Templar and crusader crosses, are meant to harken to an era of white, Christian wars against Muslims and Jews. 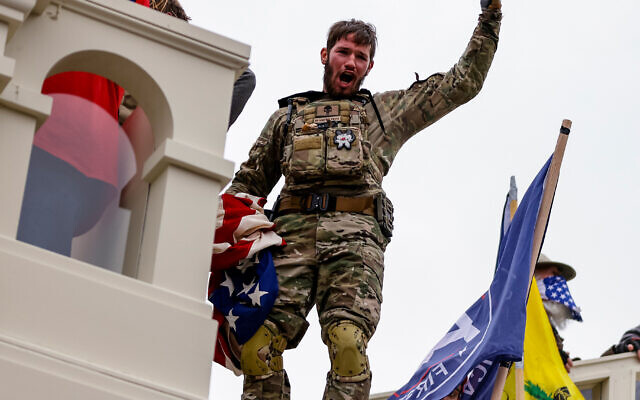 A protester at the Stop the Count insurrection, Jan. 6, 2021. (Samuel Corum/Getty Images via JTA)

The Marvel comic anti-hero The Punisher has been adopted in recent years by white nationalists and neo-Nazis, to the dismay of its creator.

“The fact that white nationalists and Nazis embrace it is a tragic misunderstanding,” Gerry Conway told Inverse. “It’s a misappropriation of the character and a blatant disregarding of reality.”

America has issues. So many issues. pic.twitter.com/cDN73eWbMa

Thank you, Fox News, for showing why the protests broke out today. pic.twitter.com/YeHcl754Jp