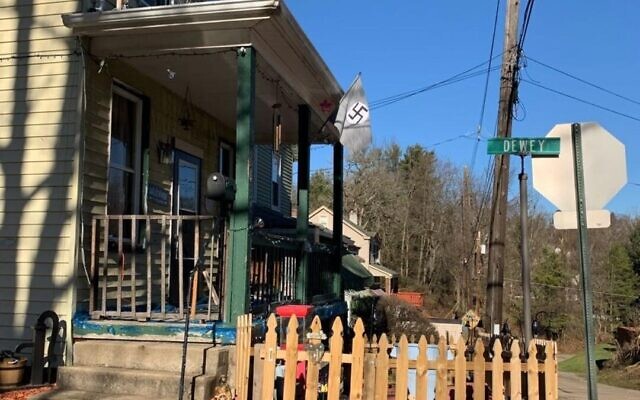 Nazi flag displayed outside home in Etna (Screenshot from Nextdoor)

A Nazi flag has been displayed outside a home on Dewey Street in Etna for the past several weeks, according to Shawn Brokos, director of community security for the Jewish Federation of Greater Pittsburgh. The flag was hung by a tenant living in the residence and not by the owner of the property, Brokos said.

The flag was first displayed several months ago, Brokos said, and was brought to her attention by a Jewish community member. At that time, “the situation was addressed,” and the tenant did take the flag down, but rehung it in November.

“The Federation is working with law enforcement and community members to address this from both a security perspective and a community relations perspective,” Brokos told the Chronicle.

A posting on Nextdoor showing a photograph of the home and the flag caught the attention of Jewish residents throughout Greater Pittsburgh, according to Brokos.

“It is frustrating when we see actions such as this,” she said. “And it is a reminder that we cannot control the actions of others. But that is why we work hard in our community to protect our citizens, whether through training or physical security enhancements. We teach situational awareness, and the importance of reporting. And that provides a sense of agency when the actions of others are beyond our control.”

Brokos urged community members to continue to report antisemitic incidents or displays to the Federation’s security team at jewishpgh.org/security. PJC