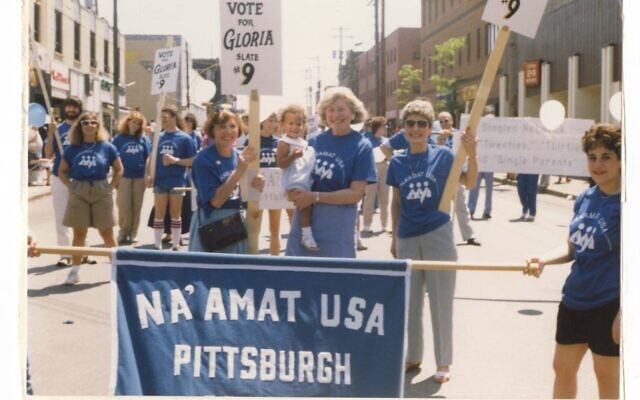 Na'amat USA Pittsburgh members at the Israel Day Parade in 1987, when President Gloria Elbling (front with baby) was running as a delegate to the 31st World Zionist Congress. Photo courtesy of Rauh Jewish History Program & Archives

After almost 100 years, Pittsburgh’s NA’AMAT chapter is winding down. The group, which fundraises and advocates for women and children in Israel, will terminate its Pittsburgh council on June 1. Members cited the scarcity of young leaders as the principal reason for closure.

“It’s really a shame,” said co-president Roselle Solomon. “We don’t have any young people. No workers. No volunteers.”

Solomon, 82, said she began with the group nearly 70 years ago, when NA’AMAT was called “Pioneer Women” and her mother was chapter president.

“She used to schlep me to meetings,” Solomon said.

The monthly get-togethers gave members a chance to connect with each other and to discuss upcoming programs and fundraisers — from yard sales to Mahj and Martini events to the annual Spiritual Adoption Dinner.

Co-president Dorothy Greenfield praised the organization’s mission, stressing that “NA’AMAT helps women and children in Israel and it doesn’t matter if they’re Jewish or not — it helps anyone there.”

Greenfield, who has been active in the group for decades, saw the fruit of her labors almost 15 years ago while visiting day care centers and schools in Israel supported by funds raised in Pittsburgh.

“I saw what they did for the youth and the underprivileged in Israel,” said Frank, NA’AMAT Pittsburgh Council’s 2019 Spiritual Adoption/Scholarship Dinner honoree.

Helping all in need has been a central tenet of NA’AMAT since its inception. According to the Rauh Jewish History Program & Archives, Zionist labor activist Rahel Yanait Ben-Zvi founded Moetzet HaPoalot (Working Women’s Council) in 1921 with the goal of preparing Jewish women for agricultural work in what was then Palestine. Funds were needed to support the cause and Yanait Ben-Zvi asked American women for help. In 1925, the Organization of Pioneer Women in Palestine was founded in New York City. That same year, the Pittsburgh chapter was established.

Meetings were held at the Zionist Institute in Pittsburgh’s Hill District before moving to the Labor Zionist Building in Squirrel Hill, then to the Tree of Life building and eventually to Rodef Shalom Congregation. Since the pandemic, monthly meetings have occurred via Zoom. 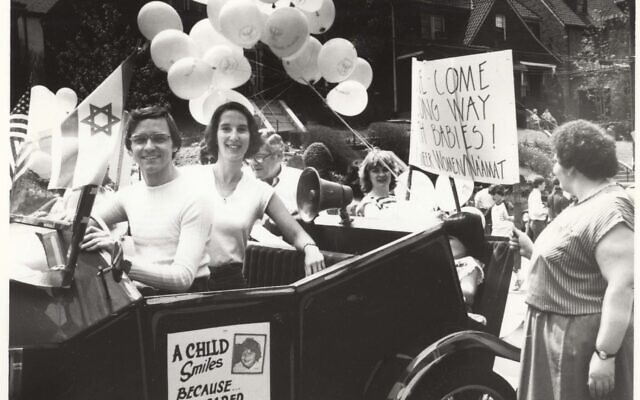 “We just looked around the past year — Hadassah closed their office and before that JNF closed their office and went toward a regional model — and it’s hard to sustain an organization at this time and in this climate,” she said. “And we thought the right thing to do was to shut our doors and continue to support NA’AMAT through the national office.”

Despite its upcoming closure, Pittsburghers can be proud of NA’AMAT Pittsburgh’s many accomplishments in Israel, said Braslawsce.

“We supported the mission and have done so since the 1920s….What we have built in Israel under the Pittsburgh name, through Pittsburgh philanthropy, is definitely a legacy to be proud of,” she said.

Gloria Elbling Gottlieb, 94, has a practical perspective on the decision to close Pittsburgh’s NA’AMAT chapter.

“It’s very sad, however my theory is nothing lasts forever,” said Gottlieb, a former Pittsburgh resident and past national president of NA’AMAT USA. “We don’t have any department stores in Pittsburgh, big companies go under and people go under. You have to deal with it.”

Gottlieb, who was a delegate to three World Zionist Congresses, first became involved in NA’AMAT in the mid-1960s. Shortly after her wedding, she was eager to support a cause with like-minded women. Despite not being able to afford the $15 membership dues, she joined NA’AMAT.

“I thought it was a very progressive organization,” said Gottlieb. “They believed in women’s rights — that’s what we fought for — rights in Israel for women. And also labor — being paid the right amount of money for the many hours you work.” 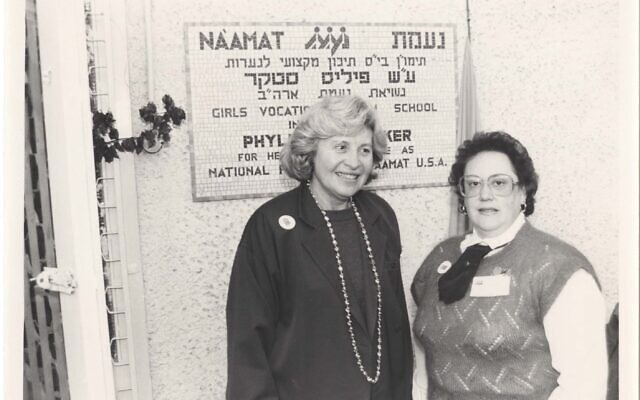 By the late 1960s, Gottlieb was selected as one of 20 future leaders of the organization and was offered the opportunity to spend a summer in Israel — which she accepted.

Pittsburgh resident Julian Elbling, 74, remembers driving his mother to New York for the flight, alongside his father and brother.

“We all backed her,” said Elbling. “NA’AMAT was her baby.”

Gottlieb soon found herself returning to Israel on behalf of NA’AMAT as often as four times a year — for a total of 39 times. She met with Israeli leaders including Abba Eban, Golda Meir and Shimon Peres, and with each visit she saw the impact of her organization on the lives of women and children in Israel.

Working beside friends in Pittsburgh to raise hundreds of thousands of dollars through NA’AMAT “gave me a purpose to make sure that Israel survived,” Gottlieb said. “If we had Israel many years ago we wouldn’t have lost all the people we did.”

While Gottlieb stressed that NA’AMAT’s mission remains critical, she accepts the current realities.

Marcia Weiss, a past president of NA’AMAT USA, Pittsburgh Council, described some of the organization’s challenges six years ago in an interview with the Chronicle.

“Membership is down in NA’AMAT,” Weiss said in 2015. “Lots of our members were older and have passed away, and we don’t have the numbers to replace them. We do get new members, but not on a regular basis. Younger women are working, and spending time with their families, and they just don’t have the time to volunteer.”

Gottlieb said she understands the disappointment generated by the upcoming closure, but hopes people still support NA’AMAT and its efforts in Israel.

“I do feel bad but it’s not the end of the world,” she said. “We have to go on and do something else, that’s all.” PJC