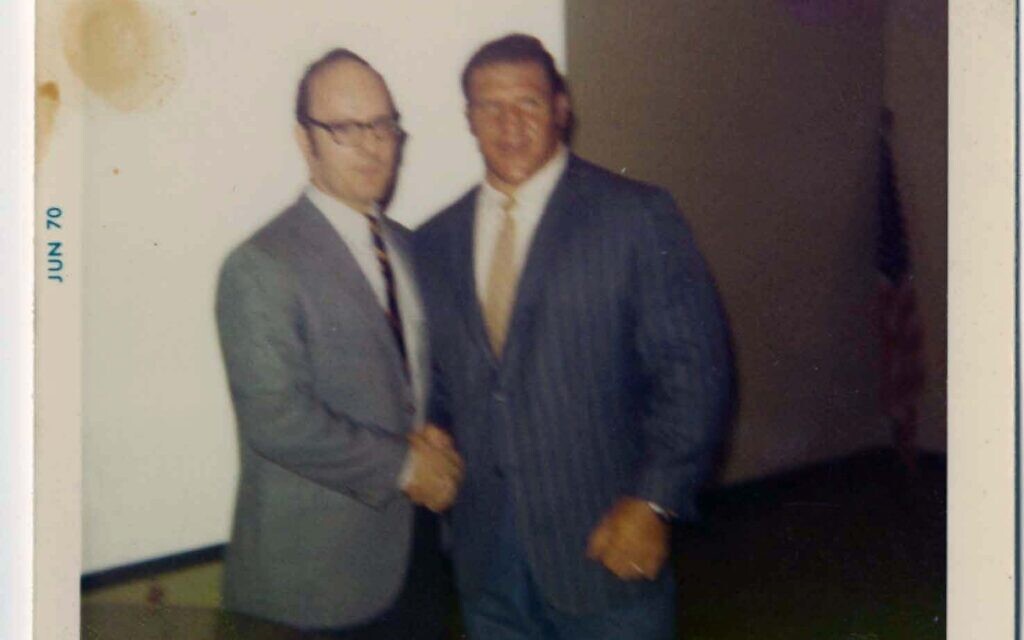 One big difference between reading history and researching history is your pathway through information. Historians collect all the information they can and chart the most persuasive or dramatic path through it. If they do their job well, the story seems inevitable. Each detail is another turn in a set of directions being dictated by a co-pilot.

Researching history is like exploring on foot. You start wherever you happen to be. One fact leads to another, which leads to a dead end, which leads to an insight. You never quite know what’s meaningful. Sometimes you come upon things from behind.

This blurry photograph is part of a small collection of materials concerning the man on the left. His name is Maurice Simon, and the collection primarily documents his experience as the literal poster child of the Jewish Home for Babies and Children in the mid-1930s. One photograph shows him as a baby, standing in a crib, staring into the camera with his right hand outstretched. The Jewish Home for Babies and Children used that image in financial appeals to the community. His face even adorned its letterhead.

In that context, this handshake seemed neat but not necessarily notable. A man met a local celebrity and got a picture. Bruno Sammartino trained at the Y in Oakland, and many people have stories about seeing him there, just as people later spotted Mister Rogers at the JCC gym in Squirrel Hill. Such encounters are part of living in a big city.

While gathering information about Simon, I stumbled upon an article from the Pittsburgh Press, dated Sept. 7, 1958. The headline read “Pittsburgh Hercules.” A photograph showed Sammartino in his trunks, with seven children hanging off his body.

The article was one of the first profiles of a man who was already a champion weightlifter and would soon become a beloved wrestler. Sammartino spent his early years in an Italian village after World War II. He was “a skinny run-down weakling,” according to the article, a 60-pound 13-year-old on a special diet and constantly seeing doctors.

Sammartino’s health improved after his family came to the United States. “But he was still too delicate to participate in athletics at Schenley High School,” the article said. “Sensing this frustration, Maurice Simon, a school companion, said, ‘Why don’t you exercise up at the YMHA. They got weights and stuff up there.” So Sammartino started lifting, then competing. He became an instructor and gradually became a star.

In searching for information about Simon’s time as the spokesperson for the local Jewish orphanage, I certainly wasn’t expecting to learn that he was responsible for getting Bruno Sammartino into weightlifting. Naturally, the path went in a new direction.

Here’s an article in the Y.M.&W.H.A. Weekly, dated Sept. 21, 1951. The headline is “Weight Lifting Builds Health,” and it begins like this: “A YMHA weightlifting team is under consideration by the Physical Education Department. The team will be coached by Maurice Simon, one of the top weightlifters in the district who won the 1951 A.M.A. A. A.U. Junior Title.” A few paragraphs later, the article notes: “Some of the boys already taking advantage of the facilities are Paul and Bruno Sammartino… Improvement in body weight, conditioning and strength are in evidence.”

Powerlifting and bodybuilding both gained in popularity in the United States after World War II, and Maurice Simon seems to have been chiefly responsible for bringing the trend to the Y. He started competing regionally in 1949 and earned 15 awards in his first three years, including a 14th-place finish in a national meet in 1950. He helped found the Y Bar Bell Club and helped raise money to buy the first lateral machine for the Y.
Developing an audience for a new sport requires education. Simon often took part in exhibitions and even helped get the Y team featured on local television. He had a small, devoted crew: the Sammartino brothers, Ralph Hill, Lennie Epstein, Sandy Cohen.

His weightlifting career tapered off in the late 1950s, after he served a tour of duty in the U.S. military and then got married. He soon started his real career, becoming well known locally as the manager of the Forbes Avenue branch of National Record Mart.

His relative Vera Tuggle, who donated the records to the archive, recalled how Maurice preferred his steak just barely kissed by the broiler.
“Ultra-rare?” I asked.

“Just about raw,” she said.

Eric Lidji is director of the Rauh Jewish History Program & Archives at the Sen. John Heinz History Center. He can be reached at eslidji@heinzhistorycenter.org or 412-454-6406.