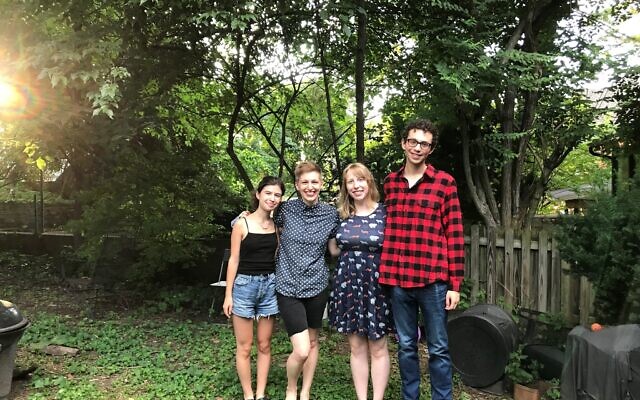 It sounds like a new reality TV show: take four young adults who don’t know one another, put them in the same house and charge them with creating a minimum of seven events a month that will attract other young Jewish adults. Oh, and for an added twist, have a pandemic force social distancing and the cancellation of in-person activities.

For the last 14 years, Moishe House has recreated this formula across the globe, including at Moishe House Pittsburgh in Squirrel Hill – albeit without the pandemic until this year.

“We have over 120 Moishe Houses in over 27 countries around the world,” explained David Press, the senior director of advancement for Moishe House. The nonprofit’s work extends from Pittsburgh to Beijing, Philadelphia to Melbourne.

The residents living at a Moishe House receive a rent subsidy in exchange for creating programming to engage young adults in their 20s, creating vibrant Jewish communities.

Until the pandemic, those programs were in-person and focused on clever, out-of-the-box events packaged and promoted in a way different from local congregations or other Jewish institutions. A typical month might feature “Cozy Night, Puzzle and Harry Potter Audiobooks,” “Tropical Lunch Shabbat,” “Blanket Fort and Movie Night,” “MoHo Goes to Nerd Night,” as well as more traditional activities, including Shabbat dinners and Havdalahs, often done with a quirky take.

Once COVID-19 required shutdowns and social distancing, Moishe House was forced to stop doing the programming that had been its hallmark.

“On March 17 of this year, we went from having over 1,000 in-person programs every single month to zero,” Press explained. “The moment necessitated Moishe House stepping in and saying, ‘It is currently not safe to program in person.’”

Because of its international reach, Moishe House saw the pandemic sweep first across China, Rome, Berlin and other cities where it had houses. The decision was made to continue to offer rent subsidies but not require its U.S. residents to create programming.

In Pittsburgh, the four Moishe House residents suddenly found themselves with time on their hands.

“For the first half of the pandemic, March through July, it was just me and Moses living here,” offered resident Marisa Cohen, 23. “Since Moishe House was trying to adapt, there were less event requirements.”

While the idea of being mostly quarantined in a house with other residents who are not family might seem daunting, Moses*, 24, has found comfort in the company.

“I think the living situation has been great,” he said. “It’s been a really nice situation to be in because it’s felt like a source of community to me at a time when a lot of people are feeling isolated.”

Despite not being required to host events, Moses and the other residents nonetheless continued to program for their community of young adults in creative ways.

“The Pittsburgh residents have really jumped in, continuing to do a lot of really diverse programming,” according to Moishe House’s Midwest community manager, Shula Ornstein. Before the pandemic, she noted, the house hosted a wide range of programming including Jewish holidays, Jewish learning and social events.

“They’ve continued to do that,” she said. “They’ve really been on the top of their game with interesting programming.”
The programming offered by Moses, Cohen and the other residents – Diana Baron, 29, and Kayla Reiman, 28 – has been tailored to the new COVID-19 reality, meaning it has moved to virtual, or no-contact settings.

Over the past few months, the residents have created events including “Zoom DIY Herbal Preps,” “Queer Tisha B’Av with Ratzon,” an educational webinar on Jewish Pittsburgh during the Spanish Flu and “Speed Dating but Platonic and on a Zoom-like Platform.”

Realizing that an unintended consequence of the coronavirus crisis has been Zoom fatigue, Moses said the residents also have worked to create events utilizing other tools.

“We’ve done a few events that are through the postal service,” he explained. “We send out materials for a collaborative art project. People send them back to us and we assemble it all together.”

Another, socially distanced, non-virtual activity planned by the residents was a volunteer cleanup event “where everyone cleaned up their own area and sent pictures.”

“We’ve been trying to find creative ways to use Zoom and virtual tools and the things they provide like accessibility to more people and a broader range of people who are able to attend and include some programming not online,” Moses said.

The residents have been promoting their events through social media and by sending individual messages to past attendees. Utilizing the virtual space also has broadened the reach of their programming.

“Former community members who have left Pittsburgh or friends who live in other cities or Moishe House residents in other cities, these are all groups who can now attend our events,” Moses said. “We’ve been posting our events in a Facebook group for Moishe House residents across the world – sometimes we get a few of them –and then I’ve been inviting friends of mine who said our events sound interesting but they don’t live in Pittsburgh.”

Both Cohen and Moses acknowledged that although it can be more challenging to create community without the ability to create in-person events they have been pleased with the programs they have hosted.

The pair point to a decidedly old-school event as one of their favorites during the pandemic, the “Create A New MoHo Resident.”

“We were searching for new residents early in the pandemic,” Moses said. “We decided to do a create a resident event by mail.”
Cohen felt the event represented “our community really well. Each person took a different body part. Different people even took the left and right eye. And, we got to support USPS.”

Moses has found the experience of living in Moishe House Pittsburgh valuable, despite the pandemic causing the residents to rethink events and find community in nontraditional ways.

Cohen agreed: “For me, it’s shown the importance of and value of bringing people together and I feel like I’ll bring that with me, wherever I end up. Making sure people feel comfortable is definitely something I’ve found value in.” PJC

*Moses’ last name has been withheld upon request.