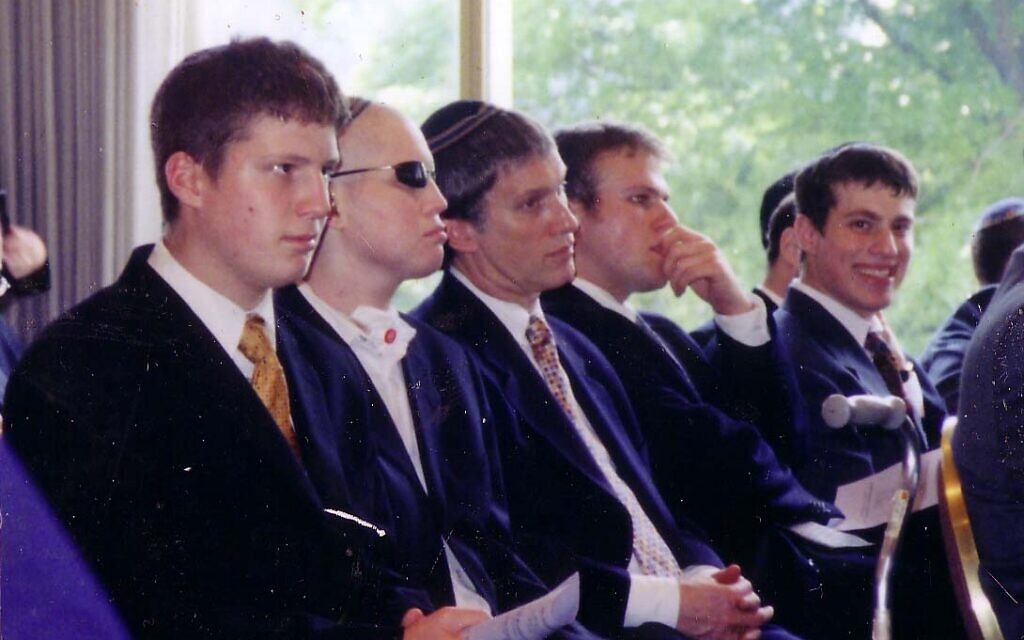 Among traditional Jews, the anniversary of a relative’s death, or yahrzeit, is acknowledged in various ways: a candle is lit, special prayers are said, some people even take it on as a fast day.

It astounds us, our friends, and relatives, that 18 years have passed since our son Mikey succumbed at age 24 to his fourth bout with lymphoma, which followed lung transplants necessitated by his cystic fibrosis. No matter what the support groups, the psychologists and the self-help books tell you, the pain is always there right under the surface — not really diminished, only sublimated, managed, restrained, submerged… but there.

I have spent the bulk of my working life immersed in the disputes found in our local family court. It can be emotionally draining, disturbing, vicious, depressing; but in this, my 45 th year of marriage, I don’t think I’ve brought any of it home — and that includes the work I’ve done for 16 years as a domestic violence court judge. Other than an occasional anecdote, usually humorous, I have carefully shielded my marriage and my family from the seamier aspects of my daily life. Except for the tensions inherent in litigation deadlines, our home life has been immune from the ugly selfishness, greed, and spite that are so much a part of my professional life.

That is not to say that our home life has not been a whirlwind. For 24 years our oldest son spent at least half of his life in the hospital. So did we. Everybody’s concept of normal is different. In retrospect, we managed to thrive in the face of endlessly recurrent medical incarcerations because of profound good fortune in certain key areas, such as living close to an incredible medical center. And, as a government employee — a condition I maintained in absolute terror of the probable consequences of change — we always had incredible medical coverage. When my conservative and medical friends whine about Obamacare bringing a disastrous end to Western civilization as we know it, I have to bite my tongue not to personalize the argument by pointing out that the specter of pre-existing conditions and lifetime limits — definitively terminated in the new system — haunted our lives, and informed every vocational choice.

When, three weeks before Mikey died, the Supreme Court of Pennsylvania reorganized the court system and closed the court where I had served three terms as a judge, we suddenly faced the terror of not being retail customers in a medical system where esoteric treatments and novel approaches were all too often dependent on the type and level of insurance the patient carried. I was unemployed for the first time ever, and it might have been a nightmare. But, the reality was that the University of Pittsburgh Medical Center was heavily invested in the complexity of Mikey’s condition and its ramifications for future transplant patients, especially since we, and Mikey, were willing to try almost anything The reality was that Mikey’s doctor, Joel Weinberg, was also his protector, who unfailingly conjured up miracles on his behalf and left no doors, or windows, unopened and unexplored. The reality was that an unfailingly generous relative called to ask how much our monthly COBRA cost would be to maintain its temporary coverage, and then sent a check. The reality was that we had friends and relatives who watched our backs and stood ready to step in with whatever help we needed.

Nevertheless, I have an ancient, not-very-smart flip phone that has preserved on it Mikey’s texts — from the ICU, while on a respirator, in the last days of his life — urgently asking for reassurance that I had secured replacement coverage.

After a professional lifetime as a government employee, a decision deliberately made in deference to the realities of that bygone medical system, my wife and I can’t be blamed for wondering how different our lives might be if my professional orientation had shifted from public service to private profit. But we have no regrets… the trade-offs made at the time weighed overwhelmingly in favor of providing unlimited medical coverage to battle the endless complications which afflicted our chronically ill firstborn. And that calculus was further complicated by the autism of our two sons (numbers three and five), whose behavioral aberrations are somewhat modified by some very expensive drugs.

With all those special needs, it was hard to get around to the regular needs of our “normal” son and daughter, who are ultimately the backbone and salvation of our family. Their spousal and lifestyle choices are unquestionably our greatest source of pride, essentially validating what had been their Orthodox lot in life as part of a very unorthodox family. There is no way to exaggerate how good fortune and great choices have made all the difference as they have crafted their family lives and given us the five grandchildren who are our generational lifeline (two of them named after Mikey).

Realistically though, it all goes back to a choice I made 45 years ago. Long before she had an undergraduate degree, much less the two master’s degrees and a PhD, my wife stood out from the crowd for her unquenchable passion and unremitting enthusiasm for whatever was her project of the moment. None of that has gotten quenched or remitted since. As teacher, principal, community educator, consultant, advocate, mother, and now grandmother, she remains undiminished by vicissitudes galore, not to mention occasional actual tragedy. In her unceasing search for people to help, wrongs to right, and good deeds to do, her enthusiasm often creates a gravitational pull that makes it incredibly difficult for her generally lazy spouse to avoid participation — no, immersion — in her project of the moment, which is usually guaranteed to make the world a wildly better place. And, except maybe on yahrzeits, she makes Pollyanna look like Job.

When I was thinking seriously of popping the question, I made a pro/con list. A con was that she preferred dark chocolate over milk chocolate. A pro was her magical ability to captivate children. It was pretty much a no-brainer for me. (Here’s an important medical alert, kids: If you do choose to make a pro/con list, never show it to anyone — and certainly not to the subject of the list. Also, destroy it immediately after you make your choice. ….a few decades in family court teaches you plenty.)

So it’s 18 years later now. Our son Mikey told me two weeks before he died, “Abba, I’m not afraid to die, but I love life!” That, after months on a respirator, rounds of horrific chemo, scalding radiation, and zillions of needles. Our computer whiz, whom Steven Spielberg and General Norman Schwarzkopf picked to teach the president and vice president of the United States on national TV how to work their $60 million Starbright computer network that interconnected all of North America’s children’s hospitals. And who could summon up his own lung X-rays on his laptop, after successfully hacking into the hospital system with only one functioning eye.

Our professional- level drummer, who sat in with the band everywhere we went, and actually played in a sold-out concert at the Met in NYC (Go to YouTube and punch in Mikey Butler). Our Yeshiva University graduate (and student body VP) who always planned to survive, and figured he would need an education to accomplish all the things he wanted to accomplish. And YU was there for him in so many ways.

So, you’ll ask, how did we get through it? What prevented our family from becoming casualties of Mikey’s disease? It may surprise you to know that we didn’t do it by circling the wagons. We opened the doors instead. That basic Jewish tradition, the Sabbath, became the anchor and the focus of our lives. It was our social life. It was our recreational life. It was our family life. And we always invited others be part of it. Every Shabbat. Whether in or out of the hospital. So that, with a unified family purpose, even our autistic kids achieve a level of serenity and control in deference to Shabbat, the company, or maybe just the effort they see us putting into it week after week. And from that effort came the reality of our lives. Lives which became enriched by the variety of experiences we had, and by the guests who shared them with us.

In the shadow of the pandemic, that experience helped us to maintain our equilibrium, our family, and even our ties to our community. Oh yeah, and it helped that six years ago the governor appointed me a judge again (and then I won an election).

We’ve experienced magic. Sparks of beauty. Flashes of spirituality. The adventure of love. The reassurance of friendship. ..as we’ve supported each other and as our community has supported us, seeing to it endlessly that we were never alone.

Would chemicals do that? I don’t think so.

Mikey didn’t think so either. PJC

Dan Butler is a judge of the Allegheny County Magisterial District in Pennsylvania.