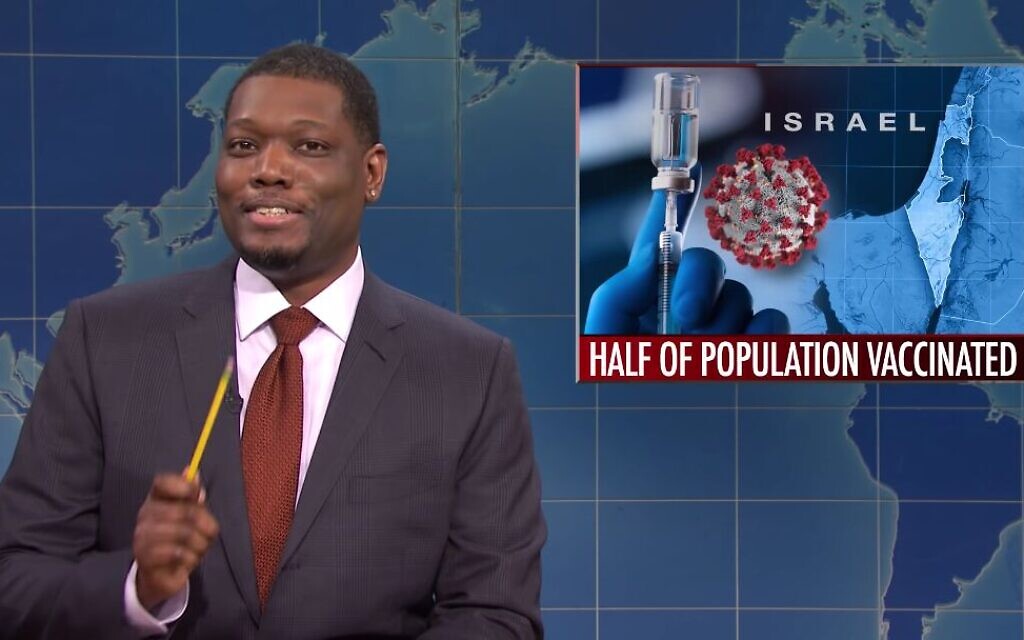 It’s Pavlovian. Someone makes an inaccurate, out-of-context, stereotypical comment about Israel or Jews. Jews react, condemning the comment as false, feeding anti-Semitism, being anti-Semitic, and coming from an anti-Semite.

The defenders of the comment or commenter then respond that the Jews are using anti-Semitism to protect Israel, that not every critique of Israel is anti-Semitic, that Jews are trying to stifle legitimate debate, that Jews are too sensitive, that Jews exploit the Holocaust, and on and on.

The pattern is so common, it is tiresome. And we are now seeing it repeated in the case of Michael Che’s “joke” on “Saturday Night Live” that since Israel has vaccinated half of its population, it is only vaccinating Jews.

The point is not whether Che is anti-Semitic or even whether the “joke” was anti-Semitic. The questions are whether it is true, fair in the context of the situation, and whether, given the history of bigotry and persecution of Jews, it unnecessarily contributes to the atmosphere that encourages prejudice against Jews and violence against Jews and Jewish institutions.

Critiquing Israel is fine. Israelis and Jews do it all the time. However, a one-off joke about Jews keeping a vaccine only for themselves, with no background, no context, and devoid of any truth is not, given Jewish history and current threats, a critique.

And the joke did not appear out of nowhere. The joke would not have been made, and SNL viewers would not have had any reference point, if the audience had not been subjected to weeks of misinformation and unfair allegations against Israel for the alleged sin of not providing vaccines to Palestinians in the West Bank and Gaza. In short, it was the natural outcome of a sustained campaign of lies, the types of lies that have led to injury and death to Jews in the past.

Israel is vaccinating all of its citizens regardless of religion or ethnic or national background. This includes the almost two million Israeli citizens who are Arab/Palestinian. This is unremarkable because all Israelis are covered equally by Israel’s universal health care system.

What prompted the “joke” was undoubtedly the unfair and unjustified charges that Israel is not providing the vaccine to the West Bank and Gaza. The “joke” was neither funny nor accurate.

Some have asserted that as an “occupying power” Israel is obligated under the Geneva Convention to provide vaccines to the territories. Despite conventional wisdom in some quarters, there is a credible dispute about whether Israel is truly an occupying power and whether the Geneva Convention applies here. But there is no need to walk through the legal weeds for this discussion.

The Oslo Accords clearly provide that the Palestinian Authority has responsibility for the health care of residents of the territories. [Oslo II Accords, 1995: “Powers and responsibilities in the sphere of Health in the West Bank and the Gaza Strip will be transferred to the Palestinian side, including the health insurance system.”]

Some argue that the duties of the “occupying power” supersede the parties’ agreement. Again, getting into the legal argument is not productive or necessary. The fact of the matter is that both parties have long abided by the Oslo provisions in the health care area, and all relevant parties have respected this for years. Israel only gets involved if the Palestinian Authority requests or approves.

Most importantly, on Dec. 21, 2020, the Palestinian Authority specifically declared that it was not seeking vaccines from Israel and that it was securing its own supplies. Israeli offers to coordinate efforts were rejected. As the Jerusalem Post reported, ‘He [a Palestinian Ministry of Health official], too, clarified that the PA has not asked Israel to supply the Palestinians with the vaccine. “We are working on our own to obtain the vaccine from a number of sources,” the official added. “We are not a department in the Israeli Defense Ministry. We have our own government and Ministry of Health, and they are making huge efforts to get the vaccine.”’

The Palestinian Authority’s position is consistent with the anti-normalization sentiment which drives Palestinian policies to differing degrees depending on the issue, the needs, and the surrounding politics. If Israel had somehow attempted to override this desire, many, and most assuredly those now criticizing Israel for not supplying vaccines, would have criticized Israel for violating the wishes of the Palestinian’s self-governing body. Who knows– maybe Michael Che would have made a “joke” about those overpowering, controlling Jews.

Once several human rights groups and other organizations started criticizing Israel, and once there were delays in the delivery of the Russian Sputnik vaccine that the PA had ordered, the PA reversed its position. Why not turn an unfortunate snag in getting the vaccine into a chance to bash Israel a bit? The usual suspects are sure to join in.

Having contracted for the number of vaccines that it thought was needed based on the Palestinian Authority’s position, what should Israel have done at that point? Should it have deprived some of its own citizens (including it’s almost two million Palestinian Israeli citizens) in order to supply the PA?

If Michael Che or any of the SNL gag writers were Israeli, or if the members of Congress who have criticized Israel, were Israelis, would they have had their moms and dads, their health care workers, their vulnerable relatives, give up their vaccines for those whose governing body had said “no thanks, we’ll do it without you?”

Michael Che’s comment is not funny, not based on fact, and is indeed quite hurtful and contributes to a dangerous environment for Jews. And it contributes to the campaign to delegitimize Israel, whether intended to or not.

Despite this history and context, Israel has shipped several thousand doses to the PA for health care workers and some other essential workers, and, as part of a broader hostage deal, it has reportedly bought a $1 million worth of Russian vaccine for Syria.

Some have said this was just a joke. The Jews are being sensitive again. The reason many Jews fail to see the humor in the “joke” is because we know our history and, therefore, we understand that the “joke” plays into the old canard that Jews are selfish, controlling, manipulative, sneaky people who watch out only for themselves to the detriment of others.

And we understand how that canard has been used through the centuries to paint Jews as evil and subhuman and to discriminate against them, to engage in pogroms, and to send them to ovens. So we’re justifiably just a little sensitive when it comes to the “joke.”

And this is not history or theory, and it’s not far away. Think Poway and Pittsburgh. Understand that while it may not make national news, Jews are being beaten up and subjected to bigotry on a weekly, if not daily, basis. There is a reason virtually every Jewish day school in the U.S., every Jewish Community Center, many synagogues, and other Jewish institutions have security guards, security codes, security fences, panic alarms, I.D. requirements, metal detectors, and fearful people.

So, joking about Jews being selfish, keeping life-saving medicine to themselves, butting into the front of the line, not playing fairly, is no joke. Whether intended or not, it is part of the mix of anti-Semitism that leads to Jewish injury, death, and hurt. PJC

Alan Edelstein was a lawyer and lobbyist in California for 30 years. He currently lives in Jerusalem and Sacramento, California, and consults on governmental affairs, communications, politics, and business development. He blogs at www.edelsteinrandomthoughts.com. This piece first appeared on The Times of Israel.