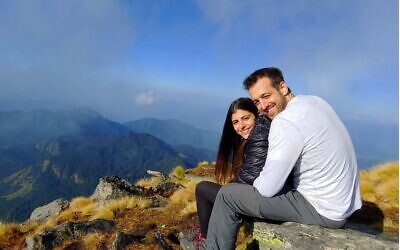 Ellen Berkman Amzallag and Eric Sirkin are delighted to announce the engagement of her son Michael Amzallag to Gal Zefadia. Michael is the son of the late Samy Amzallag, nephew of John Berkman, grandson of the late Sybil and Mervin Berkman, Estrella Amzallag of Paris France and the late Haim Amzallag. Gal is the daughter of Anat and Nachum Zefadia of Rosh Ha’ayin. Gal is the granddaughter of Orly and the late Avraham Weitzman of Kibbutz Givat HaShlosha in Darom Hasharon and Rachel and the late Rafael Zefadia of Jerusalem. Both Gal and Michael live in Tel Aviv.

Michael received his degrees in Accounting and Mandarin Chinese from Hebrew University. He is a Game Economy Manager at Playtika in Herzylia.

Gal has a degree in Industrial Engineering from the Shenkar Institute of Engineering and Design. She is a Data Product Manager at Pango in Petach Tikva.