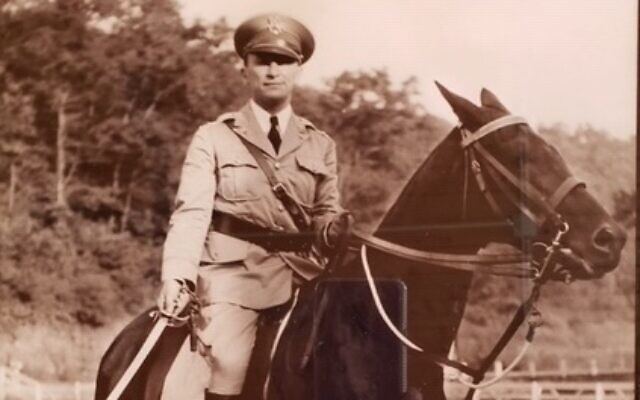 Philip Rudin on his horse (Photo courtesy of James Rudin)

My father Philip Rudin was the son of Samuel, a bootmaker, and his wife Rose. They immigrated to Pittsburgh from Belarus at the turn of the 20th century. But because hand made boots were not in fashion for most Americans of that era, my grandfather was compelled to open a grocery store in Pittsburgh’s Hill District. Young Philip lived behind the store with seven other family members.

After attending Schenley High School, my father graduated from the University of Pittsburgh Dental School in 1925. A year later, he married my librarian mother, Beatrice Rosenbloom, an Allegheny High School alumna.

The daughter of Louis Rosenbloom, Beatrice and six other family members lived above her father’s clothing store at 856 East Ohio Street near Chestnut Street on Pittsburgh’s “Nor Side” – the area north of the Allegheny River. Louis and Beatrice’s stepmother, Jenny, were born in Lithuania.

Rabbi Aaron Ashinsky officiated at my parents’ wedding. Because of Prohibition, a “Canadian cousin” attended the ceremony. He allegedly entered the U.S. carrying alcoholic beverages – legal in Canada – inside his luggage. Of course, the “cousin” was a local bootlegger.

Despite the Great Depression, my father had a thriving dental practice at 707 East Ohio Street until 1941. During that time, my brother Bert and I were both born at Allegheny General Hospital. Like our father, Bert also graduated from Pitt Dental School. We lived at 5411 Bartlett Street in Squirrel Hill and I attended first grade at Wightman School.

In 1932 Philip joined the Army Reserves as a cavalry officer and each summer he fulfilled his two weeks of military duties at the Carlisle Field Service Hospital near Harrisburg, Pennsylvania.

Years later, he told me he joined the Army in response to Hitler’s anti-Semitism. Perhaps. But I think my father liked his officer’s uniform with its Sam Browne belt and saber. I treasure a photo of him sitting atop a large steed.

In August 1941, Philip was called up for one year of active duty at Fort Belvoir, just south of Alexandria, Virginia, but once America entered World War II, he remained on active duty until 1947. Nearly every male in my extended family above the age of 18 was in the Army serving in Iwo Jima, Tunisia, Iceland, France, Belgium, Germany, and Czechoslovakia.

But my family was often pulled back to Pittsburgh. In 1942 Bert became a bar mitzvah at Congregation Beth Israel, not far from the Rosenbloom store, and in 1951, with Rabbi Solomon Freehof officiating, my brother married Nan Wiener at the Schenley Hotel.

Every Passover between 1942 and 1945, the “Virginia Rudins” drove to Pittsburgh to attend Louis Rosenbloom’s Seder. As we approached the city – we always arrived the night before the Seder – a fiery red western sky was visible. During the war, Pittsburgh’s factories roared with flames around the clock producing an extraordinary amount of steel for tanks and other weapons of war. President Franklin Roosevelt called America the “Arsenal of Democracy” and Pittsburgh was its smoke-filled polluted epicenter. 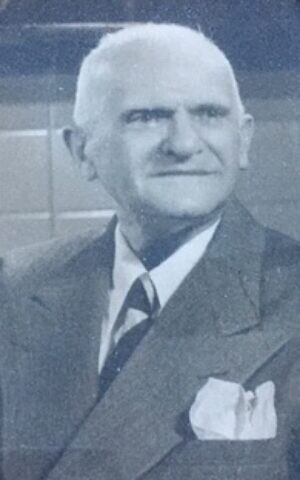 I spent most of Passover’s eight days eating gobs of ice cream at Isaly’s dairy restaurant located across the street from the Rosenbloom store. Facing left on East Ohio Street, the H.J. Heinz factory was visible with its iconic “57” trademark sign. Each year I took a guided factory tour, mostly to receive a souvenir pin in the shape of a Heinz pickle.

My mother had many relatives living in wartime Pittsburgh including the actor Charles Grodin and Leroy and Forrest Raffel, the founders of the Arby’s restaurant chain. Rebecca Rudin, my father’s first cousin, was married to Herman Fineberg, a Jewish community leader.

The two brothers Cecil and David Rosenthal, victims of the 2018 massacre at the Tree of Life building, were grandsons of Herman and Rebecca.

During Passover, I always visited Kennywood amusement park, and I also took walks alone on East Ohio Street. One destination was the Buhl Planetarium with its stargazing shows.

And then there was the Arcadia theatre at 823 East Ohio Street. A child’s admission price was 10 cents and, on most days, it offered double features of Hollywood grade B movies. Between films, the theater manager ascended the stage and awarded dishes, pots and pans to Arcadia customers holding winning ticket numbers.

Alas, the 700 and 800 blocks of East Ohio Street were demolished some years ago to make way for a high-speed highway. Louis Rosenbloom’s store, my father’s dental office, Isaly’s dairy restaurant… all gone. Only the Buhl Planetarium remains from my youthful visits to that wondrous street of memory.

Today, almost no steel is produced in the Steel City, the pollution is gone and Pittsburgh is a medical and higher education center. It is a picturesque city with clean air, hundreds of bridges, hillside funiculars, and distinctive ethnic neighborhoods including Jewish Squirrel Hill.

But my imperishable memories are of a “long ago and far away” city. You can take the boy out of the 1940s Pittsburgh, but you can never take that Pittsburgh out of the boy. PJC

Rabbi James Rudin was a member of the American Jewish Committee’s professional staff for more than three decades and served as its national interreligious affairs director. He is the author of several books, including “Christians and Jews, Faith to Faith.”