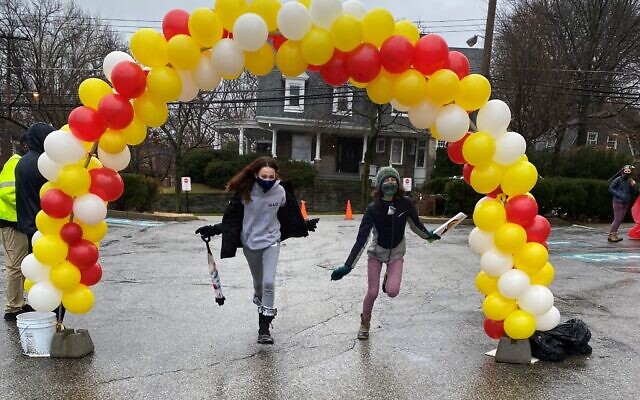 Like other congregations, Beth Shalom has had to get creative for fundraising because of the pandemic. Earlier this year, the congregation hosted a "Schlep-A-Thon" where participants circled the building, ending at a balloon decorated finish line.

Despite a year of disruption and tumult caused by the pandemic, local Conservative and Reform congregations have generally been able to maintain most of their membership, collect dues, fundraise and even get a little work done on their buildings.

Ken Turkewitz, Beth Shalom’s interim executive director, said before the pandemic started, the congregation had about 600 members; now it has 588. Most of the attrition was not caused by the pandemic, though; instead it was due to more typical circumstances, like relocating.

Membership at Temple Emanuel of South Hills also has remained relatively stable, said Leslie Hoffman, the congregation’s executive director. And Temple Sinai has only experienced a 3% loss of membership since the beginning of the pandemic, even with the retirement of its longtime rabbi, Jamie Gibson.

A mass exodus from synagogue life due to COVID-19 has not occurred, but congregations also are not seeing an increase in new members.

“Anywhere I’ve worked — and this is my 15th year of doing this — if 30 people resign, a synagogue gets 30 new members,” said Drew Barkley, Temple Sinai’s executive director. “We’re not getting the new members we had in the past.”

Beth Shalom, too, has added fewer new members in the last year, said Turkewitz. It’s hard for families to decide to join a congregation when they are unable to come into its building or participate in activities in person. The Conservative congregation has, though, attracted some new members through its daily Zoom minyans.

“Our minyan numbers are up from what they were,” Turkewitz said. “We’ve even had a few people who belong to other synagogues become associate members because they’re coming to our minyan, felt a connection and wanted to be a part [of Beth Shalom] in some way.”

Temple David in Monroeville has gained a few members, said Rabbi Barbara Symons, the congregation’s spiritual leader. The new additions are mostly local residents who are sending their children to the congregation’s religious school, which is held virtually.

“These are people who have been with us on Zoom and have found a way to feel connected to the cycles of Jewish life as well as online learning,” Symons said.

Temple Sinai’s religious school was impacted by the slow trickle of new members most congregations are experiencing, said Barkley. In a typical year, there would be six or seven new families joining the school, but this year, “registration is about 60 to 65% of what it would normally be.”

Although enrollment is down, attendance is up.

“I’m happy to say we continue to get incredible reviews for what we’ve accomplished, in our school and in the way we’re doing it and how we’re doing it,” Barkley said.

“There have been some bumps along the way as students go from learning all day in public school to Zoom religious school, but we’ve done OK,” Lehrer said. “Attendance has been good, as has participation.”

While dues collection for some congregations has been down, the decrease at most congregations is not as drastic as once feared, mirroring what is happening in the Reform movement nationally, said Barkley, who cited a recent survey by the Union of Reform Judaism in which 69% of respondents said they experienced a small decline in dues.

Revenue also has been down for congregations due to the loss of room rentals and catering for b’nai mitzvah and other celebrations. That, along with the inability to host traditional fundraising events, has forced congregations to become creative.

Fundraising overall has been more difficult, including annual High Holiday appeals, which had to be done virtually, “so the numbers have come down somewhat,” said Symons.

If there is a silver lining to local synagogues sitting mostly vacant the past year, it might be that needed or postponed work could be done with a minimum of disruption to members. That included not only technological upgrades for the Zoom services and classes, but also needed construction.

Barkley has scheduled work on Temple Sinai’s roof, and some “HVAC work that was long, long overdue,” he said.

Adat Shalom has been able to concentrate on security upgrades funded by the Jewish Federation of Greater Pittsburgh over the last year.

In the end, COVID-19 may be responsible for more than building upgrades and finding new ways to stay connected. It may also cause local synagogues to rethink what membership means, said Temple Emanuel Senior Rabbi Aaron Meyer.

“Terms associated with synagogues, like ‘membership’ and ‘dues,’ are modern innovations in response to unique historical circumstances,” Meyer said. “As these circumstances change, we are quite overdue in the need to reexamine the funding structures and exclusivist membership models we have long taken for granted.” PJC