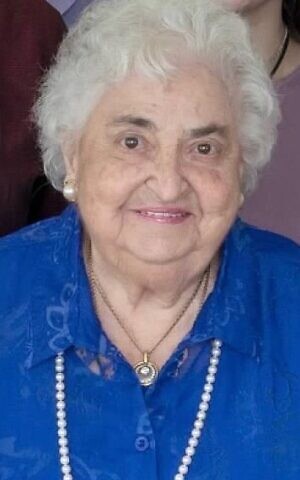 ZLOTNIK: Marion “Mimie” Zlotnik, of Pittsburgh, born June 2, 1928, passed away on July 19, 2022, at 94 years of age. Dearest daughter of the late Harry and Ida Surloff. Wife of the late Milton Zlotnik. Survived by her sons Cliff (Judee) and Arnold of Pittsburgh, and Stuart (Donna) of Montville, New Jersey. Grandmother of Zachary, Bryan (Sonya) and Lindsay of Pittsburgh, Robert of New York, New York, Hayley of West Palm Beach, Florida, Joshua of Shelton of Connecticut, Ian of Houston, Texas, and Eric of Horsham of Pennsylvania. Great-grandmother of Patrick and Ezra of Pittsburgh.
Mimie was surrounded by her family and caregivers and passed peacefully. Mimie was a native of Pittsburgh where she attended Taylor Allderdice High School and the Pittsburgh Art Institute. After marrying her beloved husband, Milton, they started and built Pestco, a local pest control company that is still operated today. Mimie was known as an avid and accomplished artist. Her artwork was frequently featured at local exhibitions and adorns the walls of the homes of her family and friends as well as Weinberg Terrace where she lived for the last 10 years. Mimie lived for her family and was the consummate caregiver. She was strong-willed even in her passing. She hung on, waiting for two of her grandsons to arrive from New Jersey so she could see them one last time. There is something poetic about her passing. We all knew there was a good chance that she would be reunited with Milton, her beloved husband of 67 years, on the day of their anniversary. The caregivers told us she had a bit more time, but not Mimie. For 94 years she did things her way and last night was no different. Though she was uncharacteristically one hour late she rejoined the love of her life in eternity.
Services at Ralph Schugar Chapel, Inc., 5509 Centre Avenue, Shadyside, on Wednesday, July 20, 2022, at 1 p.m. Visitation one hour prior to services, (12 noon – 1 p.m.). Interment Beth Shalom Cemetery. In lieu of flowers, contributions may be made to the Jewish Association on Aging, 200 JHF Drive, Pittsburgh, PA 15217. schugar.com PJC