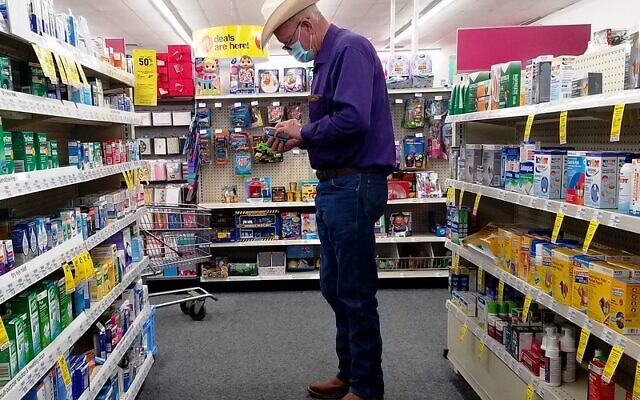 Even among the vaccinated community, some are weary about shopping without a face covering. "COVID-19 chronicles: man wearing a cowboy hat & a face mask." Photo by Gilbert Mercier, courtesy of Flickr.com

The news that Pennsylvania’s COVID-19 restrictions would begin to be loosened in May was met with enthusiasm by many state residents. As more people were vaccinated, businesses were allowed to move from 50% to 75% occupancy, then finally to 100% on Memorial Day. Several businesses, including some grocery and department stores, began allowing vaccinated customers to shop without masks.

But while many Jewish Pittsburghers were thrilled at the prospect of attending synagogue again or picking up a challah for Shabbat without a mask, others were filled with anxiety over the idea of walking tight grocery aisles sans face coverings, and encountering other shoppers that may — or may not — have been vaccinated.

“I do still wear a mask when I go to the store,” said Kathy Ginsburg, who was vaccinated in March. “Being indoors, amongst people that you have no idea whether they’re vaccinated or not is still uncomfortable for me.”

Concern for her children, both of whom have completed their first round of vaccination, and her mother and mother-in-law, are motivating factors for Ginsburg. Still, the South Hills resident said that despite continuing to be cautious for herself and her family, she doesn’t have an issue with others not wearing a mask in public.

“I can’t fault others for following the CDC guidelines,” she said.

And yet, Ginsburg noted, there is value to the normalization of donning masks in public settings.

“I think wearing masks is a great solution — if you’re sick, you want to prevent others from getting what you have,” she said. “It’s just common courtesy.”

Cantor Rena Shapiro was fully vaccinated by the end of February but she didn’t rush to join those in line at the post office or head to the mall.

“I didn’t start going back into the stores for quite a bit,” she said.

While she has become more comfortable venturing out, Shapiro said she isn’t ready to ditch her mask, despite new store policies.

“I know some stores are saying if you’re comfortable without a mask, you don’t have to wear one,” she said. “I’m still wearing mine in all indoor settings.”

What Shapiro has been willing to give up are the plastic gloves she used to wear while shopping, but she still carries disinfectant wipes and hand sanitizer with her.

Shapiro, the spiritual leader at Beth Samuel Jewish Center in Ambridge, also continues to wear a mask in restaurants whenever she isn’t eating. Being cautious, she said, is part of her nature.

Both Ginsburg and Shapiro said they have given up wearing masks outside, as long they aren’t in large groups of people. But the Three Rivers Arts Festival is an example of an outdoor event where Shapiro said she might still wear a face covering.

“You don’t know who hasn’t been vaccinated yet,” she said. “Yeah, if I’m in a crowd outside I will probably still wear one.”

Leora Goldberg, 16, is also unwilling to attend large group events without a mask unless she’s sure that everyone else there has been vaccinated.

Goldberg, who got her second shot two weeks ago — after recovering from COVID 19 — said she still wears a mask when she goes to the grocery store, even though most supermarkets have relaxed their regulations.

“My risk is very, very low and now that I’ve had my second shot, I’m hopeful that I’ve gotten through the worst of it,” she said.

Squirrel Hill resident Lenny Plotkin is “way past the two-week period” since he received his second shot, he said. He stopped wearing a mask as soon as it was permissible and doesn’t experience anxiety in public without it.

“The fact is that I’m vaccinated,” he said. “If people that aren’t vaccinated decide to go without a mask, they do so at their own risk and if they do so, that’s their business.”

Asked where he might still feel the urge to wear a mask, Plotkin joked, “at an anti-vaxxers convention.” PJC