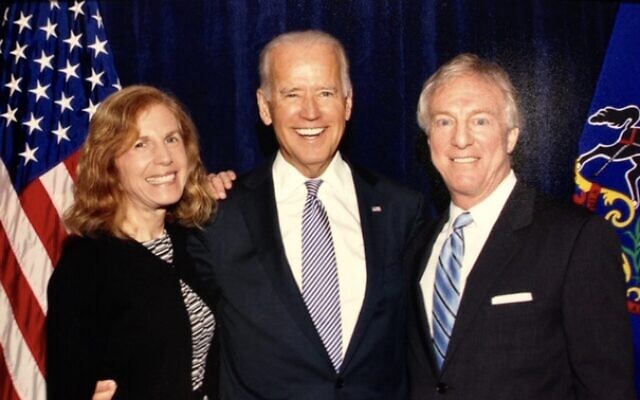 Cliff Levine with his wife Rosanne and Joe Biden at a 2014 reception in Pittsburgh. Photo by Alicia Dallago.

Stacey Reibach watched this year’s Democratic National Convention from her couch, spicing up the experience one night with Chipotle takeout.

She had bigger dreams for the event: Reibach wanted to be a Pete Buttigieg delegate.

Earlier this year, she went door-to-door across her district, asking registered Democrats if they would help her reach the 300 signatures needed get her name on the ballot.

But the dream was crushed twice over, first by Buttigieg dropping out of the race, then by COVID-19. Still, Reibach watched the DNC.

“I had low expectations for basically a Zoom convention,” she said. As the executive director for a state senator, Reibach spends a hefty chunk of her day on Zoom calls and said she finds it a difficult means to connect with people. But, she said of the DNC, “I was blown away.”

“By the end of 16 hours, you really knew Joe Biden as a human and what he stands for,” she said. “Under trying circumstances, I thought they just really knocked it out of the park.”

“I thought that that message and the ability to see what makes him tick and what he’s really like and to talk to family and friends — it was really a very accurate and honest depiction of who he is,” he said.

Levine can speak from personal experience. As a young lawyer, he worked on Biden’s 1988 presidential campaign, and the two stayed in touch. Levine now serves as the Biden campaign’s Pennsylvania state counsel and is a member of its national finance committee.

This year was both different and difficult for him. He attended the Pennsylvania delegation’s morning breakfasts and special briefings, all virtual. But he missed the feeling of actually being there.

“On one hand, there’s something about a live show… by not having a live show you’re losing something in terms of the energy level,” he said. “On the other hand, they were able to do some pretty creative things.”

While Reibach also missed what she calls the “audience factor,” she sees a silver lining: With most of America homebound, she thinks the conventions might have had a more captive audience.

Yet even the Republican National Convention couldn’t make Abby Schachter break her hard “no TV at night” rule. So she watched clips of the speeches the mornings after and got the play-by-play from her husband.

Schachter covered the conventions before she even had a vote. The former New York Post writer moved from Canada to Israel to the U.S. in the ’90s and became a citizen in 2007. Now a research fellow at the Institute for Politics and Strategy at Carnegie Mellon University, Schachter wasn’t dismayed by the format change to this year’s conventions.

“Life has changed dramatically since the conventions were established,” she said. “It’s probably not a bad thing.” 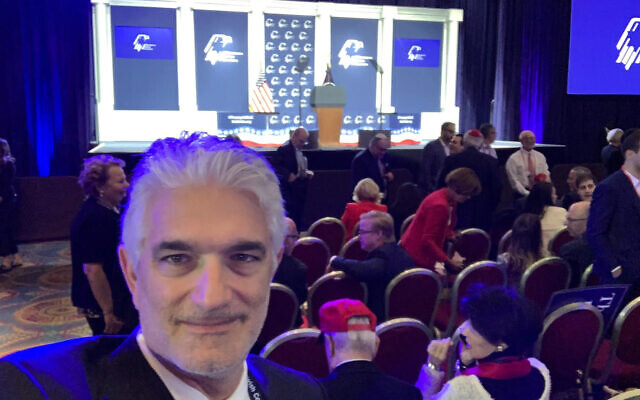 “Frankly, most of the time, I didn’t really want to watch them because it’s just a bunch of people wearing funny hats and yelling and screaming, and I didn’t get a whole lot out of it,” he said, adding that this year wasn’t any better.

“I’d rather see debate on issues than on people,” he said. “It’s the politics of fear and preying upon identities and all of the things that I think is wrong with politics. It doesn’t matter what party.”

And Tucker thinks viewers see the speeches through the lenses of their preexisting biases. “People pick and choose what they want to hear out of somebody’s speech and find a reason either to applaud it or criticize it,” he said.

Schachter sees the conventions as opportunities for viewers to learn about the parties’ platforms. But she’s skeptical that they influence behavior in the voting booth.

“Whether their vote can be changed as a result of watching, I don’t know,” she said. “It wasn’t the case for me.”

Whatever their party, Pittsburgh-area convention watchers know how important Pennsylvania will be in the election this fall. “It could be the most important swing state in this election,” Levine said.

“I would hope that voters in Pennsylvania paid attention,” said Schachter. “What happens here will be very, very meaningful to the outcome of the election.” PJC