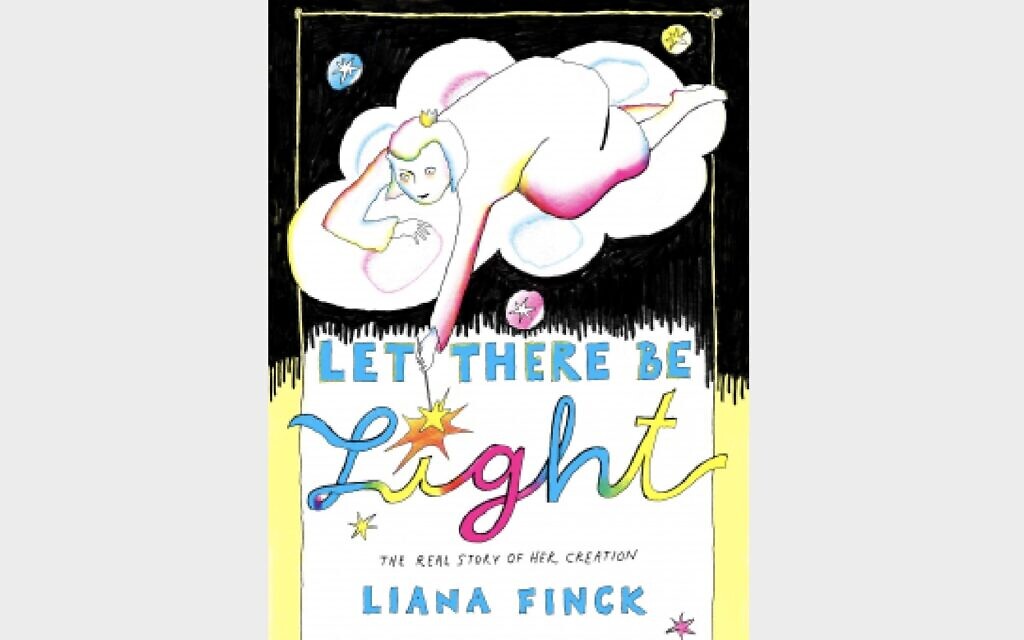 Liana Finck’s “Let There Be Light: The Real Story of Her Creation” is hardly the first time a mere mortal reinterpreted the story of creation.

In 2009, underground cartoonist Robert Crumb published “The Book of Genesis,” a tome depicting the 50 chapters of Genesis in explicit detail. Crumb, with exhaustive line work, illustrated the men of the Bible as beefy and wooly cavemen, the women as indecent and full-bodied, their rudimentary clothing torn to reveal ample flesh underneath.

On the cover alongside Adam and Eve is another provocative image: An old, white man clothed in a billowing white robe, with a white beard dangling near the ground over which he is hovering.

The graphic novel adaptation of the first book of the Torah was meant to be a very literal — and very Christian — interpretation, but the depiction of God as light-skinned and masculine persists in popular culture.

In “Let There Be Light,” published April 12 by Random House, that isn’t the case.

A cartoonist duly employed by The New Yorker and a Fulbright Fellow, Finck opts out of meticulous drawings of a burly men and an aged God to present her own one-and-only God: a stick-figure woman in a triangular dress, a single swooping blob delineating a plain haircut, a diminutive crown donning her head. Behold, the omniscient God of our ancestors.

But really, the simple-looking girl Finck conceived God as is just that: Finck’s conception.

“Let There Be Light” is far from a feminist polemic about what would happen if God was depicted in Biblical texts as a woman. Instead, Finck asserts that just as humans are made in God’s image in the story of creation, God can be made in the image of an unassuming cartoonist whose squiggly-line text bubbles and uneven shading make it clear she is far from perfect.

Finck has long opted for simple drawings to convey complex human ideas and stories, and her work in “Let There Be Light” is no exception.

God sits on her puffy, minimalist cloud and peeks down at her creations, from a wobbly Adam, Eve and Lilith the snake to Joseph, whose prophetic dreams are, according to Finck, so boring, that she refuses to illustrate them.

In the telling of the book of Genesis, Finck takes some major liberties. Ditching the desert, she draws Abram as an art school student, assigned by God to create a great masterpiece. He wears a sloppy, curly pompadour and thin, wiry glasses instead of the usual robe. He sets up an easel in Central Park and becomes more of an image of a 2014 hipster nightmare than the Jewish forefather.

The story of Joseph is likewise transformed. Gone is the land of Egypt, and in its place is an underwater land where the Sea King rules. Joseph, a Hebrew man with two feet, becomes a fish out of water among Egyptian merpeople.

But the absurdities Finck leans into do nothing to detract from the point she’s trying to make. After all, are the stories of the Torah and of creation not absurdist to begin with? Spontaneous darkness and light? A tree of knowledge with sinister implications?

Finck, in her author’s note, writes that she isn’t particularly religiously minded. Her skepticism of the biblical telling of creation are clear, as are her grievances with the way women, enslaved and victims of sexual abuses, are often swept under the storytelling rug.

Yet clearly she believes the stories of the Torah have merit. Even if, in her mind, they aren’t factual, they at least contain truth.

In her sometimes simplified and abridged telling of Genesis, Finck interweaves midrashim: In the telling of the story of Isaac, Finck describes him as a laughing child until Abraham, asked by God, intends to sacrifice him. Knife brandished toward him, Isaac stops laughing. Finck writes next to an understated asterisk at the bottom of a page that Isaac would become a totally different person after the intended sacrifice. Trauma changes people.

Published only three days before Passover, “Let There Be Light” is, almost painfully, an apt telling of the events of so long ago, but also a telling of the times today.

Though Biblical texts have long been upsetting and alienating to some, the minimalism and restraint of Finck’s panels are a balm. When the minutiae of Biblical time and space are gone, what remains is the mind and soul of the readers, who are gently invited to see themselves in the archetypes of characters in a world once absurd and far away, but now held closely in a page between their fingertips. PJC