Where can two youth engagement directors working for different Jewish organizations network? How can a fundraiser employed by a Jewish not-for-profit build a relationship with a synagogue executive director? Where can Jewish professionals get together in a casual setting to hear other Jewish professionals present exciting aspects of their career?

If you answered JPro Pittsburgh for any of the questions above, you would be correct.

JPro Pittsburgh is the local chapter of a national network that works to help the Jewish professional community to contribute to the vitality of their communities, support career growth and serve as the central resource for professional development, according the organization’s website.

Locally, pre-COVID-19, members would attend happy hours at local bars and gather informally around some substantive programming, according to David Chudnow.

Chudnow is the manager of the Jewish Federation of Greater Pittsburgh’s Volunteer Center. For the last year he has helped plan and coordinate local JPro events. He works with Classrooms Without Borders Operation Manager Ateret Cope and lay leader Josh Donner to develop local programming geared toward professional development and networking.

While you must work for a Jewish agency to take part in the programming, Chudnow points out, you do not have to be Jewish to attend local JPro events. Even the word “professional” is open for interpretation, he explained.

“I think it’s a very loosely defined term. It includes Federation and its beneficiary agencies. It includes the synagogues, the early childhood education programs, whether they’re affiliated with a synagogue or not, any organization that works in the Jewish communal space.”

Chudnow became involved with the organization’s local leadership after attending a national conference last year. He said that the approximately 20 people that attended the conference in Detroit now serve as a sounding board for programming ideas.

Starting in December 2019, the group asked local professionals to highlight their work at monthly happy hours. In March, JPro was forced to cancel its planned events due to the pandemic’s effects which were beginning to be felt in the city.

Rather than attempt to create socially distanced events with limited participation, JPro Pittsburgh’s leadership has begun to create virtual events, promoting them through its social media accounts and the emails Chudnow sends to past attendees.

The group has hosted virtual lunchrooms for its members and both Eric Lidji, director of the Rauh Jewish History Program & Archives at the Senator John Heinz History Center, and Squirrel Hill Health Center Dr. Jonathan Weinkle have discussed their work at virtual get-togethers.

As part of the group’s fall speaker series, Raimy Rubin, manager of impact measurement for the Jewish Federation of Greater Pittsburgh, discussed a new report assessing the effect of COVID-19 on the Jewish community. 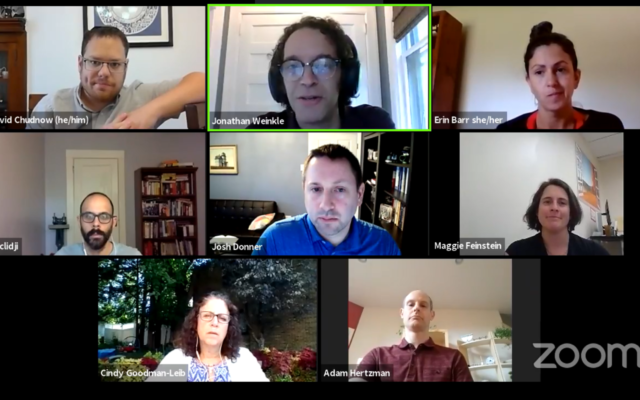 “They’re super interesting,” Chudnow said. “It’s not something that necessarily directly affects our work but it’s something that a colleague within our space is doing.”

The opportunity to hear about other’s work is important, Chudnow explained, because each agency and organization is working in the same Pittsburgh Jewish community.

For Cope, who has been a leader in the organization since it was reconstituted in 2016, JPro helps Jewish professionals feel connected across agencies.

“It makes you feel like you have coworkers in one of the other organizations and that you are not siloed to a specific organization. We are all working together to make a better Jewish community.”

Rebekah Malkin, young adult engagement director at Temple Sinai, had not attended a local JPro event before going to the Detroit convention in place of a co-worker who was unable to attend. She viewed it as an opportunity to meet people doing similar work with similar challenges from which she could learn and grow.

“I really enjoyed it,” she said. “It was a fun opportunity to meet other Jewish professionals in the Pittsburgh area and kind of build a network there as well.”

She now attends as many JPro Pittsburgh events as possible and pointed out that it offers local professionals a chance to better serve the community by learning about other agencies and careers not connected to their profession.

“If I didn’t have JPro as an opportunity to meet my colleagues at JFCS or the Squirrel Hill Food Pantry, I wouldn’t know what resources were available to the community and then, If I were to work with a young adult who had a need, I wouldn’t be able to connect them,” Malkin said.

Chudnow agreed that forming relationships with others working in the Jewish communal space is a strength of the organization, both in members’ professional and personal lives.

“Creating creative relationships outside your daily lists of tasks is important to professional development,” Chudnow said. “Broadening your horizons and learning how to facilitate conversations better in general is important. I think it helps create more holistic growth.” PJC