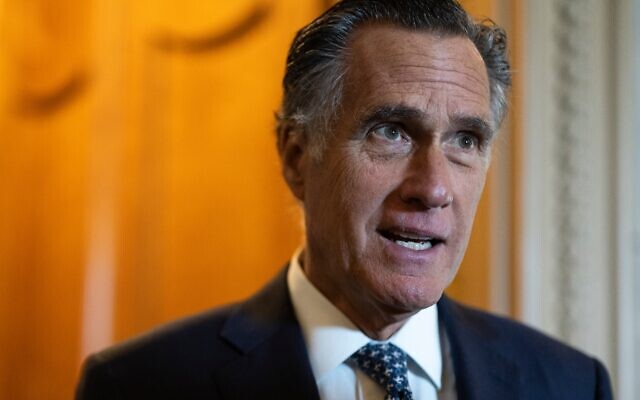 Sen. Mitt Romney, a Utah Republican, speaks to reporters outside of the Senate Chambers during a series of votes in the U.S. Capitol Building, May 11, 2022. (Anna Moneymaker/Getty Images)

WASHINGTON (JTA) — Sen. Jon Ossoff, a Jewish Democrat from Georgia, joined with Republican Sen. Mitt Romney of Utah in calling on the Biden administration to “ensure a full and transparent investigation is completed and that justice is served” in the killing last month of Shireen Abu Akleh.

The letter sent Monday to Secretary of State Antony Blinken raises the stakes for Israel as it seeks to tamp down anger at the killing of the venerated American Palestinian journalist, which occurred during an Israeli army raid into the West Bank town of Jenin.

The letter demands answers within 30 days, guaranteeing that the killing will remain in the public eye even as President Joe Biden is planning a visit to Israel in the coming month.

Romney’s involvement underscores that the pressure coming from U.S. lawmakers on the issue is not only connected to progressive Democrats, who have grown increasingly critical of Israel in recent years. Romney, the Republican presidential candidate in 2012, is known for his closeness to Israeli leaders and the pro-Israel community. Ossoff is a cautious centrist who played up his Jewish community involvement when he ran for Senate last year.

Israel has said it has narrowed down the source of the shooting to two: A group of Israeli soldiers and a group of Palestinian militants. Israel wants the Palestinian Authority to hand over the bullet that killed Abu Akleh so it can test it against the Israeli soldiers’ rifles and conduct a joint Israel-P.A. investigation, with the United States as an observer.

The Palestinian Authority, which has filed a complaint with the International Criminal Court over the killing, says Israel is unequivocally to blame and does not trust Israeli authorities to conduct an impartial investigation.

The letter from Ossoff and Romney does not weigh in on the controversy over the bullet but is unequivocal in seeking transparency. “The killing of a U.S. citizen and of a journalist engaged in the work of reporting in a conflict zone is unacceptable,” it said.

A recent letter from 57 Democrats in Congress calls for an FBI investigation and suggests that Israel is the likely responsible party. Another bipartisan letter from 25 Congress members also demands an investigation but blames the Palestinian Authority for hindering one with its refusal to hand the bullet to Israel.