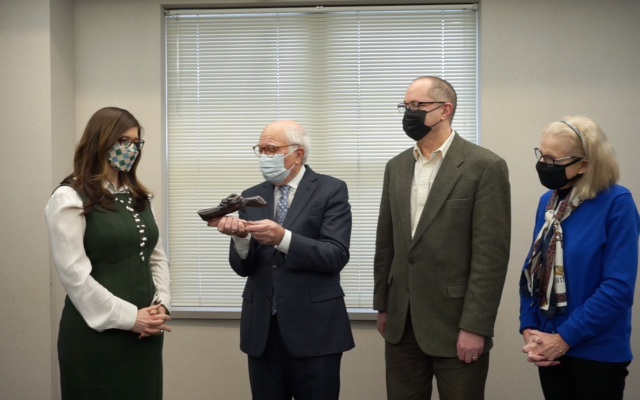 Jillian Zacks said she was speechless when told she would receive the Shore-Whitehill Award for her work with Achieva and Jewish Family and Community Services.

Zacks has served as board chair for both JFCS and The Arc of Greater Pittsburgh (Achieva is the parent company of The Arc, a nonprofit) and a board member of Achieva, Friendship Circle and 21 and Able. As an attorney at McAndrews Law Offices — specializing in estate planning, special needs trusts, guardianship, estate administration and Orphan Court matters — she assists families in planning for the future of their loved ones with disabilities.

The award, given annually by the Jewish Federation of Greater Pittsburgh and Jewish Residential Services, celebrates volunteers who promote the inclusion of people with disabilities in the fabric of Jewish life through advocacy or direct service to those individuals and their families.

“When Robert Whitehall called me and told me I received the award, I didn’t know that I had even been nominated,” Zacks said. “I was so honored. It really took my breath away.”

The North Hills resident, a single mother of two adult children on the autism spectrum, said her experiences have fueled her enthusiasm for work in disability law, something she has pursued since law school.

“I was in law school when the ADA [Americans with Disabilities Act of 1990] passed, and I was part of a disability law clinic, so it’s always been a passion of mine,” she said. “Becoming a parent of two children diagnosed on the spectrum early in life definitely directed me as an advocate.”

Her roles as both a parent and advocate gave her an inside perspective, she said, and allowed her to see the challenges that arise for individuals as they progress through different stages of life.

Zacks was chair of JFCS at the beginning of the pandemic and helped guide the organization through necessary changes to ensure staff members were safe and clients were served, Jordan Golin, JFCS’ president and CEO said.

“She’s pretty incredible,” Golin said of Zacks, noting the effort Zacks put into her volunteerism, her work as an attorney and as a mother.

“I have absolutely no idea how she is able to squeeze all of her activities into a day,” he said. “I honestly don’t. And despite it all, she has an incredibly positive attitude and a lot of creative ideas. She’s a real collaborator. She works really well with partners of all kinds and just gets along with everybody.”

Zacks’ nomination by both JFCS and Achieva is the first time in the award’s history that two organizations nominated the same candidate. Both nonprofits nominated her without knowing the other had already done so.

“I think it highlights the fact that two pretty large, well-known, well-established organizations realized her commitment, dedication and passion for advocating and supporting people with disabilities and their families,” said Nancy Murray, senior vice president of Achieva and president of The Arc of Greater Pittsburgh.

Murray said that Achieva, which is celebrating its 70th anniversary, was founded by families of children and adults with intellectual disabilities. The organization provides “lifelong services,” beginning with early intervention services for infants and toddlers, as well as “advocacy and family support,” she said.

Murray isn’t surprised by the amount of time and energy Zacks gives to others.

“That’s just the way Jillian is wired,” she said.

Some of the most passionate volunteers are those who have children with disabilities, Murray added.

“You quickly become aware that there are other families out there that might not have the time or ability to speak up,” she said. “If you do, then you have to do it for others. That’s the kind of person Jillian is. She would not have been content to just advocate for her children.”

One of the award’s namesakes, Bob Whitehill, said its genesis can be traced to Leviticus 19:14:

“You shall not curse the deaf or put a stumbling block before the blind.”

The award, Whitehill explained, was created in 1996 when he and Barbara Shore chaired a special needs task force for the Pittsburgh’s Federation. The pair recognized a disconnect in the Jewish community between the needs of those with disabilities and the services offered.

Zacks received the award on Jan. 16 — two weeks before the start of February, which is Jewish Disability Awareness, Acceptance and Inclusion Month — in a video ceremony because of COVID-19. He hopes to present next year’s award in-person again.

“She’s so well known, not just in the Jewish community, but in the larger disability support and advocacy community,” Gale said. “I think that’s just wonderful.”

The Shore-Whitehill Award is endowed through a fund in the Jewish Community Foundation, Lily Wein, the Federation’s human resources manager said.

“It’s a great example of ways that community members have used Foundation endowments to continue their legacy to improve Jewish communities and the greater Pittsburgh community,” Wein said. “We are honored to be able to partner and celebrate champions of inclusion in our community.”

“She’s a wonderful, thoughtful and caring parent and professional,” Rudolph said. “We were so fortunate to have her commitment for several years and are truly grateful for her service.”

Zacks isn’t planning to rest on her laurels now that the community has recognized her work.

“I’m going to continue doing what I do, which is provide information in all the forums I can, continue to be an advocate, write articles and make sure individuals have information on what’s moving forward,” she said. “All of that will continue into the future.” PJC