Mark Davidson and Josh Green weren’t the first to consider the intersection of sports, culture and music. Whether it was the ancient Greek ceramicists who depicted citharists at the Pythian Games at Delphi, or Rolling Stone’s review of the 1993 collaboration between hip hop artists Fu-Schnickens and basketball player Shaquille O’Neal in “What’s Up Doc? (Can We Rock),” the sports, culture and music junction has been crisscrossed and analyzed for millennia.

Davidson and Green have now joined the fray through a biweekly podcast titled “Take A 20.” The two longtime friends, who first met at Camp Young Judaea in New Hampshire, spend each episode looking back on the year 2000. Between the Summer Olympics in Sydney, Australia, season one of “Survivor,” and the St. Louis Rams and Super Bowl XXXIV, there is no shortage of material from Y2K. But, as listeners quickly learn, the podcast isn’t really about the year 2000 specifically. The goal, rather, is to isolate moments from 20 years ago for contemporary analysis.

When Green initially considered a 20-year retrospective on sports, culture and music, it was 2017. Reflecting on 1997 may have involved a deep dive into Robin Williams’ retelling of Game 6 of the 1975 World Series during “Good Will Hunting”; deciphering the marriage of professional sporting events and Chumbawamba’s “Tubthumping”; or, identifying a song that matches Tiger Woods’ first Masters win, but, for a variety of reasons, after reaching out to Davidson, the duo punted.

Three years later, when Davidson and Green found themselves between professional opportunities, they revisited the idea of launching a podcast. Earlier undertakings had given each of them vast insights into sports, culture and music — Green had spent years as a television anchor and in public relations and sports marketing, and Davidson had dedicated more than a decade to the live music industry as a booking agent and tour manager — but, as the podcasters explained, being able to package a story or understanding the intricacies of spending months traveling with a band in a van isn’t necessarily translatable into 50 minutes of compelling dialogue.

Further challenging the idea of putting together a podcast was the fact that they did not live in the same city. Davidson is a resident of Pittsburgh’s Squirrel Hill neighborhood; Green, though currently in New York City, is relocating to South Florida. Given the distance, the two cultural cognoscenti committed to meeting online. 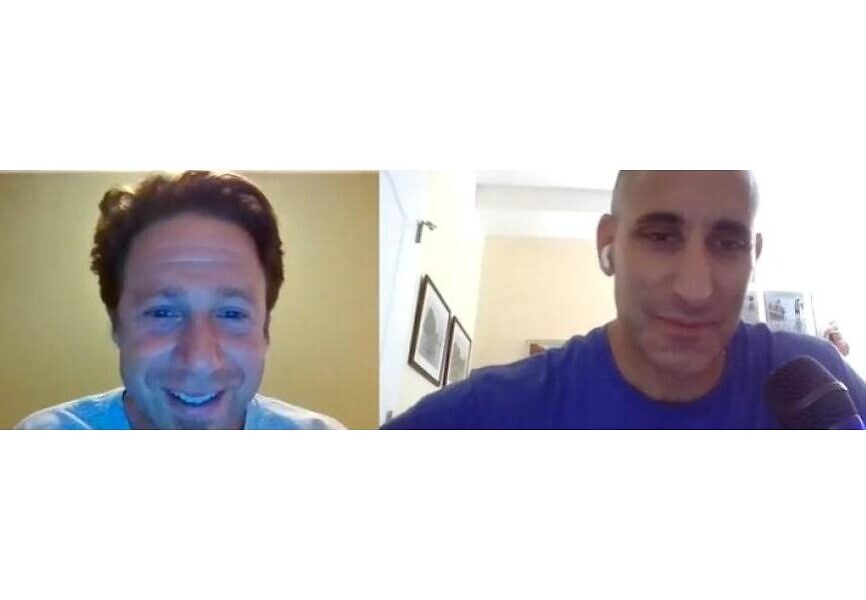 As fate would have it, while Davidson and Green were trying to understand a new medium and communications from afar, so too was the world around them. As a result of COVID-19, communicating on screens became much more prevalent, and whatever mistakes the Jewish duo made early on in understanding each other’s nonverbal cues or body language, thousands of Zoom neophytes were experiencing similar pangs, noted Green.

With practice, and in time, Davidson and Green remedied their shortcomings. The latter worked on his energy and elocution, and the former softened his dramatic mannerisms.

Eight episodes in, the show is hitting its stride, said Davidson.

“As we got more comfortable in just being ourselves, we really just naturally reverted to the cadence and rhythm of our friendship,” said Green. Their conversations “began to feel really similar to what we'd be doing if we were in the same room.”

In a lot of ways, this echoes how it all began nearly three decades ago, noted Davidson.

During the mid 1980s, Davidson and Green, two sports obsessed Jewish kids, arrived at Camp Young Judaea. After their friendship developed, they decided to share their mutual passion with a slightly larger audience. As teenagers, the Generation Xers became involved in WCYJ, Camp Young Judaea’s radio station, and although the internet has an elephant’s memory, the earliest evidence of those audio efforts are untraceable.

“We joke it was the lowest rated radio show ever,” said Green.

Between its listener base of 45 people, and its reliance on a 50 watt signal, the co-hosted morning program was rudimentary at best. What it provided, however, was an early education in preparedness and delivery.

“We took it so seriously,” said Green.

Planning sessions the night before each show were dedicated to determining musical choices and conversational topics. The structured framework bolstered by youthful zeal enabled Davidson and Green to spend hours discussing shared interests, which led to decades of doing more of the same. 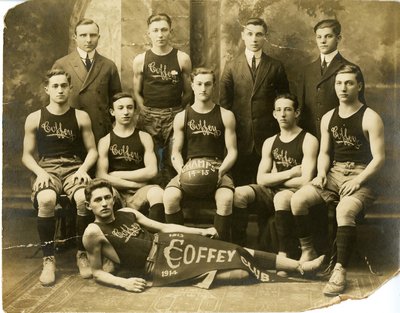 Sports and culture have long played an important role. This photo is one of one hundred photos of Jewish sports teams from the Jewish Sports Hall of Fame of Western Pennsylvania. Photo courtesy of the Rauh Jewish Archives.

Nearly 30 years later, the podcasters know they aren’t the first to recognize the evolution of sports, culture and music, or even the first Jewish sports obsessed kids to continue examining these topics into adulthood. Davidson and Green are proud of their work, but freely admit that they aren’t expecting to displace media empires or sign lucrative contracts in the immediate future. In some ways, the podcasters are simply happy to build on years of past conversation and challenge themselves in the process — because as much as they’re reviewing the moments of 2000, they’re also looking back on themselves.

No longer cassette-carrying Jewish campers, Davidson and Green are middle-aged adults with families and responsibilities. But it’s this totality of experience that has influenced their understanding of changes in the world of sports, culture and music.

Social media, for instance, has not only provided fans with greater access to athletes, but has given athletes a better means of disseminating their own values or building their brands, said Green. For example, athletes are speaking out on race-related issues in ways that may have been uncommon decades ago, noted Davidson.

The podcast also features interviews, including one with Kristi Castlin, an American bronze medalist in the 100-meter hurdles at the 2016 Summer Olympic Games, who discussed athletes’ abilities to advocate and potential fears of doing so; and Tamir Goodman, a former American-Israeli basketball player labeled the “Jewish Jordan” by Sports Illustrated, who described the power of faith to carry one through life’s difficulties.

Like they’ve done for more than three decades, Davidson and Green plan to keep the conversation going — the next episode welcomes Squirrel Hill resident and MLB.com writer Jonathan Mayo for a discussion on the “Subway Series” between the New York Yankees and the New York Mets — and, when January hits, are just as excited to discuss 2001 as the year prior.

“That was one of the things that I liked about the idea, was that there wasn't an endpoint,” Davidson said. “That if we're able to find a rhythm, we can keep doing this as long as we're having fun and enjoying it.”

“Take A 20” is available at Apple Podcasts, Spotify and online. PJC