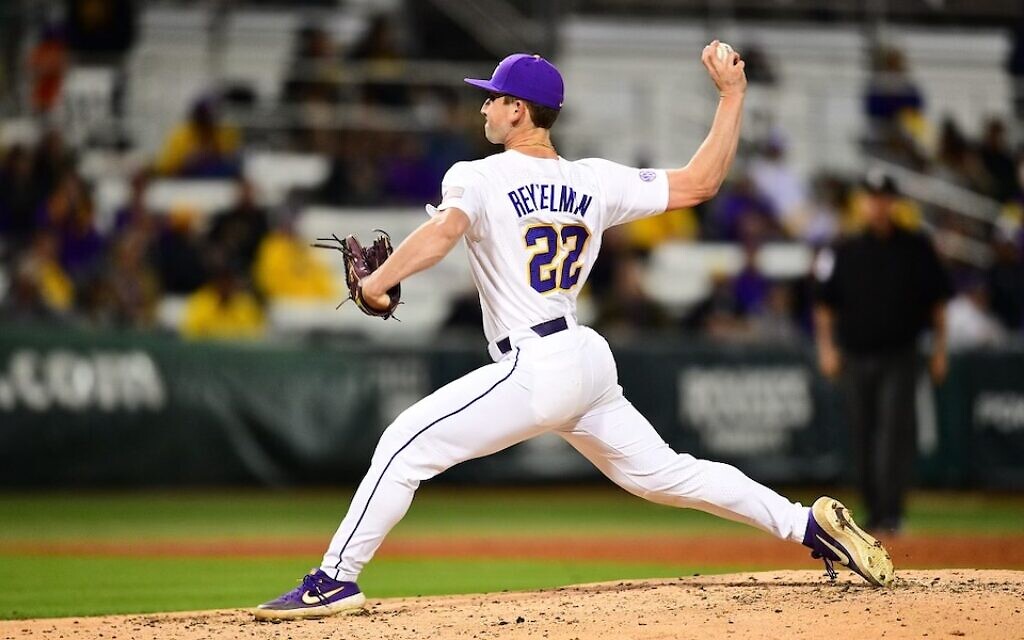 Jewish pitcher Eric Reyzelman has his sights set on a career in Major League Baseball. (Courtesy)

(JTA) — Eric Reyzelman is in a New York state of mind.

The New York Yankees selected the Jewish Louisiana State University pitcher 160th overall in the fifth round of the Major League Baseball draft on Monday.

Reyzelman told the Jewish Telegraphic Agency he plans to sign with the team and begin his career in professional baseball instead of returning for final year at LSU. He does not yet know what his first stop will be in the Yankees organization.

“Unbelievable, unbelievable moment for me and my family,” he said, minutes after receiving the news.

Reyzelman, born and raised in California, has never been to New York, even though he has always wanted to visit. The son of two Jewish immigrants — his mother from Ukraine and his father from Moldova — Reyzelman said he is looking forward to putting down Jewish roots in New York.

“Everywhere I’ve gone, every Jewish person in so many areas of the country are somehow all Yankee fans. It’s unbelievable,” he said.

“Historically, it’s just the best team in baseball and to be able to play for them is an absolute dream come true,” he added.

Reyzelman is not Orthodox like Jacob Steinmetz and Elie Kligman, who last year became the first two Orthodox Jewish players drafted into the MLB. But Reyzelman told JTA that his Jewish faith helps drive him on the mound, and that he wants to get involved in the local Jewish community of wherever he ends up playing. He added on Monday that he has always wanted to help offer baseball clinics for Jewish children who are interested in baseball.

“I think there’s a lot of really, really cool opportunities and I’m excited to just kind of delve into them,” he said.

The 6-foot-2 righty throws a fastball that can hit 100 miles per hour, plus a cutter, a changeup, a curveball and a slider. His goal is to be a starting pitcher.

Reyzelman has endured quite the journey to reach this point: the 21-year-old was twice cut from his high school baseball team, underwent ulnar collateral ligament reconstruction on his elbow — better known in baseball as Tommy John surgery — and had his college career disrupted by the COVID-19 pandemic.

“I think that had I not gone through what I went through in high school, I wouldn’t be anywhere near where I am,” Reyzelman told JTA earlier this month.

Reyzelman said he’s already received messages on social media from Yankees fans. He relishes the opportunity to “be able to go play for them and hopefully have a good career, be a good example.” PJC