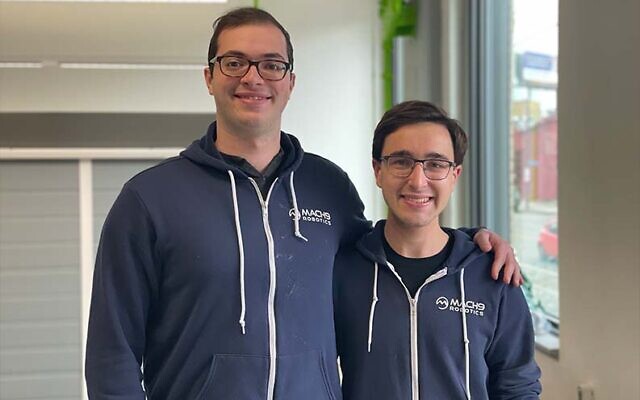 Alexander Baikovitz is working to make the smart city a reality.

Baikovitz is the co-founder and chief executive officer of Mach9 Robotics, a software and integrated sensor hardware company that’s helping Pittsburgh, and other cities and companies, keep their infrastructure safe.

He likens Mach9 to diagnostic tools that help patients monitor their health, enabling cities and companies to better monitor infrastructure using data and sensors to make decisions and understand where capital could be deployed most efficiently.

Of particular interest to locals is the company’s Pittsburgh Bridge Initiative, a project creating 3D maps of all the city’s bridges. The initiative was launched in early February, shortly after the collapse of the Fern Hollow Bridge.

“The Pittsburgh Bridge Initiative,” Baikovitz explained, “is less about scanning all of the bridges, which is one component. The real component is building technology that will help push forward the bridge inspection space and help incentivize new technology that understands where problems exist today. How are bridges evolving, and how do we need to invest in our communities to ensure that accidents like Fern Hollow don’t happen again?”

Whittaker’s research interest, noted on his CMU biography, includes how mobile robots work in unpredictable environments, such as natural terrain and outdoor worksites. He helped create technology to aid in the inspection of nuclear facilities from the Manhattan Project.

Baikovitz credits his mentor’s experience with informing his decision to start Mach9 as a way to bring robotic systems into the world to do jobs humans should not do because of the danger and risk.

“Looking at underground utilities to bridge infrastructure, trying to connect some of these dots to understand and monitor degrading infrastructure and preventing failures from happening in the first place by predictive analytics,” Baikovitz said.

The roots of Mach9 were planted during the time Baikovitz spent with Elon Musk’s SpaceX. Rather than helping to explore outer space, though, the engineer worked on Musk’s The Boring Company.

“I became fascinated with these giant tunnels that people bore underground,” he said.

After working at SpaceX, Baikovitz secured funding through NASA’s Space Technology Research Fellowship, allowing him to study underground mapping and perception and to think about commercial applications, laying the groundwork for Mach9.

Mach9, he said, is focused on building software and technology that scans both the surface and underground, allowing people to understand the structures around them as well as things like pipe voids and rebar.

The technology, he said, is like looking through a time machine.

“You can look at radar data underneath the street or underneath a bridge to see all these layers of time,” he explained. “You can see, here are the old trolley tracks that used to run under Forbes Avenue, or here are abandoned utility lines that were left from the ‘60s, ‘80s or ‘90s, when documentation or digitization was not necessarily the best practice or didn’t exist.”

Baikovitz said that Mach9 is creating partnerships with civil engineering companies and municipalities, both in the Pittsburgh region and across the country.

“We’re really interested in identifying companies that can value this type of software that will make bridge inspections more cost-effective, integrate with the existing workforce, as well as be able to improve the accuracy and objectiveness of the results in that process, at the same time,” he said.

Baikovitz hasn’t worked alone in creating Mach9, named after the fastest speed a jet-propelled vehicle has ever traveled. His co-founders include Michael Mong, Haowen Shi and Zachary Sussman. Like Baikovitz, Sussman is Jewish and grew up in Florida.

“Growing up in Boca Raton, you don’t feel like growing up Jewish is different, Sussman said. “It’s almost like growing up in Israel where everyone around you is Jewish. Boca is 50% Jewish. I went to a Christian school that was over half Jewish.”

Sussman and Baikovitz met during orientation at CMU on their first Shabbat on campus.

“I said to myself, ‘Alex is going to doing something really big and when he starts a startup, you should join,’” Sussman recalled.

When that day came, Sussman already had what others might consider a dream job — working at Tesla Autopilot. He told Baikovitz he would need to wait a year to join the newly-formed company.

“One day later [after his year with Tesla] he called me and was like, ‘Hey, are you ready to join Mach9 Robotics?’” Sussman said with a laugh.

Baikovitz is excited about the company he’s created with his co-founders and the technology-driven future of Pittsburgh.

“It’s this region where there is so much growth and so much excitement about new technology and innovation,” he said. “We see that with all the amazing self-driving companies, to Duolingo, to other start-ups, all working on pretty remarkable solutions that are helping to change our city and world.” PJC