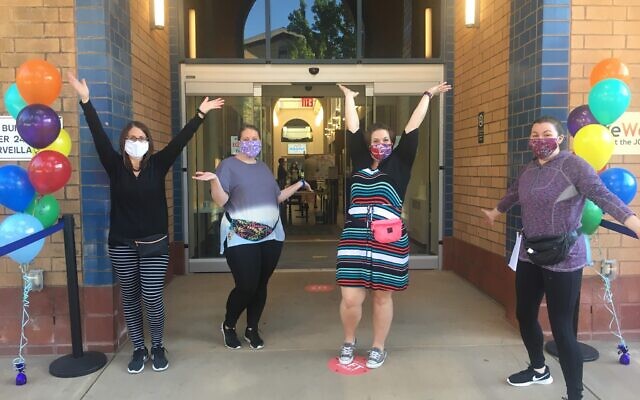 The Jewish Community Center of Greater Pittsburgh reopened its Squirrel Hill and South Hills Early Childhood Development Centers on Monday June 1, and plan to open its summer day camps on June 22 in Squirrel Hill, the South Hills and Monroeville.

JCC leadership and staff have been planning the school’s reopening since Governor Tom Wolf closed Pennsylvania day care centers and schools on March 16.

“Certainly, since we’ve closed, we’ve been talking about what it would mean to reopen,” explained Liza Baron, director of the Squirrel Hill Early Childhood Development Center. “We did a backward design, thinking if this is the date we are going to open, what needs to happen before that. It was particularly important to the JCC that we provide our families and educators some notice.”

Baron said that it was crucial to the ECDC that the educators were part of the conversation about reopening because they “are a critical part of what daily life in the Early Childhood Development Centers will look like.”

Many aspects of daily life will be different from pre-COVID-19 days, according to Baron.

Changes to the program start with child drop-off. Parents will not be able to enter the Squirrel Hill building; instead, they will drop off students at the driveway on Darlington Avenue. A JCC staff member will greet the family at their door where every person in the car will be screened and have their temperature taken.

Because of social distancing guidelines, children will be separated by classroom and the JCC will be making an effort to have the same teacher with the same group of children every day, hopefully eliminating the need for “a lot of subs,” Baron said.

Common areas, including the gym and playground, will still be used, however there will be no “mixing of groups of children,” according to Baron.

Another difference created by the pandemic, is the number of students enrolled in the ECDC. The JCC would typically have up to 200 children registered for a typical summer session, but this season it is expecting about 75, Baron said.

Infants under the age of 12 months, she noted, will not be registered for the ECDC “until it feels like the time is right.”

While several overnight camps will be closed due to the pandemic, the JCC is planning to open its day camps before the end of June.

Campers and their parents can expect a new look to camp this summer. The daily drop off procedure will now include a health screening and temperature check.

According to the JCC’s chief program officer, Jason Kunzman, staff will escort children into the facility and drop them off at their camp group. Campers will remain with throughout their time at camp with the same group, which will be limited to no more than 10 children. “Physical distancing” will be imposed between the various groups, Kunzman said.

Unlike previous years, the Monroeville camp will not provide bus transportation for families.

In establishing its new protocols, the JCC worked with the Pittsburgh Regional Health Initiative to “break down the camp day into its respective components, deconstructing and then reconstructing what the day has to look like to accommodate physical distancing, as well as cleaning and/or disinfecting in between groups use of common areas and/or equipment,” Kunzman said.

PRHI, a subsidiary of the Jewish Healthcare Foundation, is a nationally recognized leader in process improvement in healthcare settings and since 2018, has partnered with the JCC in five areas, according to Kunzman. Those areas include “consumer engagement, staff engagement, safety and security, health enhancements and sustainability.”

The Jewish Healthcare Foundation has been providing PRHI’s services in kind to the JCC for the last two years, according to Kunzman. Once the impact of the COVID-19 impact forced the JCC to close its doors, he reached out to JHF President and CEO Karen Wolk Feinstein, asking if PRHI’s resources could be redeployed to help the JCC “begin building and vetting processes related to reopening.”

Both the JCC’s ECDC and day camp programs utilized PRHI’s services as they prepared to reopen their doors.

In addition to PRHI, the JCC is closely following guidelines set by the Centers for Disease Control, which means that counselors, ECDC educators and JCC staff will be wearing masks throughout the day.

Camp staff also will be carrying what Kunzman called a “sanitation pack.” He explained that “they will have a variety of materials to help in real time” with cleaning the disinfecting and will include “hand sanitizing gloves, disinfectant wipes and hand sanitizer to name a few. Every group will have a sanitation pack assigned to a counselor and that pack will be following the group around over the course of the day.”

Opening the JCC’s ECDC and day camps are just the start of returning to “business as usual” for the JCC. Kunzman said that while there is no date set for any other service to open, thought has already begun about how to keep children safe.

“We want to get the early childhood process down first and make sure that we have planned appropriately,” he said. “Then we can afford ourselves the opportunity to revise that plan. Once we get that done we can move onto the next challenge which is, how do we open with a number of service lines happening at the same time and ensure the safety of everyone in a building at the same time?”PJC