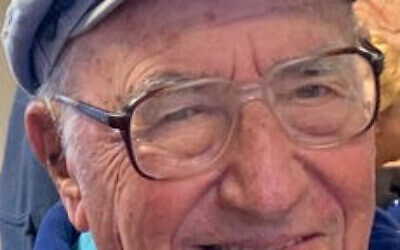 SHAPIRO: On Saturday June 20, 2020, Jason Harold Shapiro passed away peacefully at his home in Montecito, California. Beloved husband of the late Hope L. Shapiro, may her memory be a blessing. He met Hope on a blind date at Penn State University and eloped before he deployed to the South Pacific in 1945. This was the beginning of a lifetime of love, devotion and companionship.

Jason was born in Pittsburgh on February 15, 1921. He was the youngest son of Hyman and Sarah Shapiro. Jason and brothers Sam and Howard were and will always be fondly referred to as “The Shapiro Boys.” Their bond was legendary. His brothers preceded him in death in 1998. The Shapiro brothers left an undeniable stamp on the Pittsburgh music, radio, sports and philanthropic landscape. National Record Mart was the first retail record chain in the United States. Generations of record buyers and concert ticket purchasers made their way through the doors of NRM. He was and is still adored by all the people and families that worked there. From the Beatles to Frank Sinatra, Jason, Sam and Howard partnered with Pat Dicesare bringing many concert events to Pittsburgh.

In the mid-1960s Jason was instrumental in bringing the Wilt Chamberlain era of NBA basketball to Pittsburgh. This led him and his brothers to join with Gabe Rubin becoming a founding team owner in the American Basketball Association. Jason fulfilled his dream with the Pittsburgh Pipers, winning the championship in the inaugural 1967-68 season. He always said it was the most expensive fun he ever had! Jason’s greatest joys were family, friends and philanthropy. His main focus was Jewish education. It was always about the children, the ”kinderlach.”

He had a lifelong commitment to the Yeshiva Schools and Lubavitch Center. Each Shabbos, Jason was the “lollipop man.” There are countless grown men in the community cherishing the memory of celebrating the sweetness of Shabbos with a “lolli” from Mr. Shapiro. Jason supported Hillel Academy day school, the Jewish Association on Aging, Hebrew Free Loan, Jewish Family and Community Services, United Jewish Federation, Jewish National Fund, Kollel, Aleph Institute and many more. He was beyond generous but never sought attention.

Jason loved his winter Acapulco vacations with his beloved wife, Hope, and summer vacations in Beach Haven, New Jersey, with the Sapper family. In later years they enjoyed annual trips to Santa Barbara to visit their daughter and grandsons. Jason’s relationship with his lifelong best friend, Martin Sapper, was unique beyond explanation. Jason Shapiro was a true tzadik.