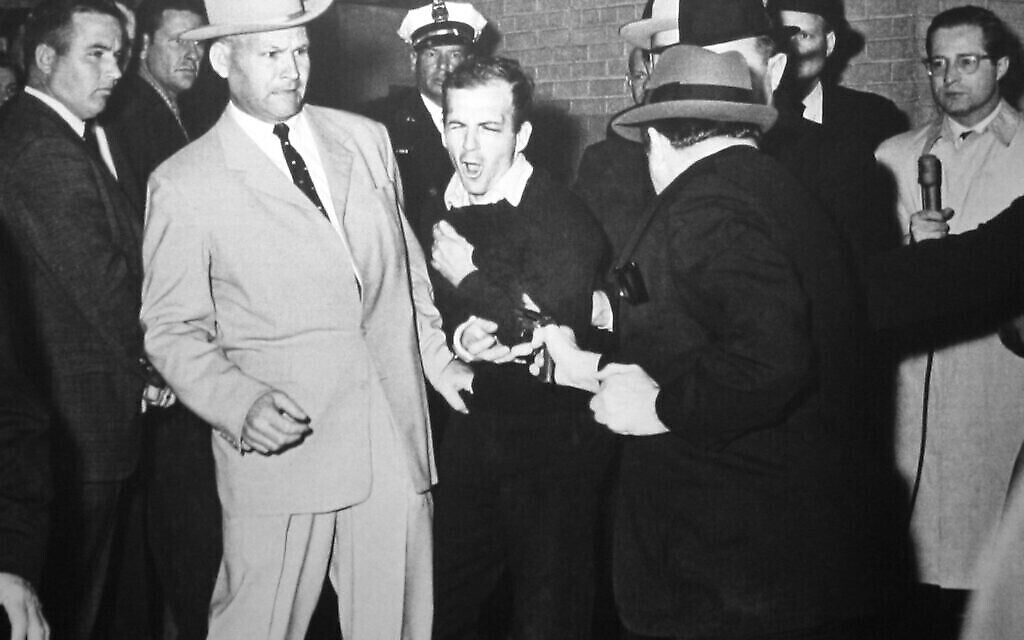 Ruby — born Jacob Rubenstein into a Jewish family in Chicago — would be tried for murder in 1964. His shooting of Oswald had actually been captured on live TV with millions watching. Still, the subsequent trial was far from a slam-dunk, as explained in a new book, “Kennedy’s Avenger,” by Dan Abrams and David Fisher.

Celebrity lawyer Melvin Belli helped make the Ruby case into a protracted affair that featured a defense based on claims of Ruby’s mental illness, a rare tactic at the time.

Belli fought the prosecution with objection after objection — including claims of antisemitism — in a trial further punctuated by the testimony of Ruby’s rabbi and with a hostage-taking by escaped prisoners from a jail upstairs.

Meanwhile, a larger investigation was underway with the Warren Commission examining the assassination, while JFK conspiracy theories circulated among the public.

In a phone interview with The Times of Israel, Fisher said that Ruby’s niece contacted the authors after reading the book and shared previously unheard stories about her late uncle. She told them that after the Kennedy assassination, Ruby called his mother in Chicago later that day.

“He was crying hysterically,” Fisher said. “He said he wanted to come home because he was so emotionally overcome with this. His mother said ‘don’t come home, stay there.’ He did. Two days later, he killed Lee Harvey Oswald.”

The book is part of a series co-written by the authors about individual court cases illustrating key moments in American legal history. Each case is from a different century, and all involve U.S. presidents to some degree — including future president Abraham Lincoln working as a defense attorney in a murder case back in 1859.

Fisher has co-authored many other books with many other authors — including separate titles with the late George Burns, former New York Mets pitcher Tug McGraw and then-U.S. presidential candidate Donald Trump. (Asked about his collaboration with America’s 45th president, Fisher laughed and mentioned some of his other collaborators, from Nobel laureates to sports stars to famously liberal Congressman Robert Wexler.)

He noted a few other accomplishments, from becoming the only journalist ever granted full access to the FBI crime lab to attending Russian rocket launches in the Ural Mountains.

One of them is his current co-author Abrams, a lawyer and the head of legal affairs at ABC. Their partnership began after Fisher found a transcript of the 1859 murder case defended by future president Lincoln — his 29th and final such case. He contacted Abrams and a book was born. The series is now up to four, with six planned in total.

The case that’s the focus of their current book hinged upon the relentlessly resonant series of events that transpired on Sunday, Nov. 24, 1963.

That morning, Ruby drove to downtown Dallas with his favorite dog — whom he referred to as his wife. Leaving the dog in the car on a hot day, he went to a Western Union office to send $25 to a stripper he employed who needed to pay her rent. Afterward, he walked to Dallas police headquarters, where Oswald was being transferred to prison.

Ruby often carried large sums of money because of his nightclub work, and he carried a gun as well. His profession had familiarized him with the Dallas police, some of whom visited his nightclubs, although Fisher dispels rumors that he also had ties to the Mob.

Unimpeded, Ruby entered the basement of police headquarters and approached Oswald. Ruby fatally shot Oswald in the stomach — an event captured on live TV by NBC with millions watching at home. This widespread coverage made it among the thorniest issues to sort through when selecting a jury for the trial.

“Here was this heinous crime committed on national TV,” Fisher said. “Two questions arose. It was all new stuff. If a person had seen the crime being committed, could they be a juror? Secondly, do you let TV cameras into the courtroom? Neither one of these issues had been debated or settled.”

The book details the subsequent debate over these and other issues, including whether to change the trial venue entirely. Yet the location remained in Dallas as a legal showdown ensued between Ruby’s attorney Belli and the prosecutor, Henry Wade, who would become famous again a decade later as an opponent of abortion in the Roe v. Wade Supreme Court case.

“[Belli] was the most flamboyant lawyer in America at that time,” Fisher said. “This case was going to make his reputation… It was going to be his greatest moment.” As for Wade, “he used to boast he had done 24 capital cases and of the 24, 23 people had been executed. He wanted to execute Jack Ruby.”

To save his client, Belli turned to an unorthodox strategy and claimed that Ruby suffered from a rare, recently discovered mental illness.

“[Nichols] described Jack as a somewhat troubled but good person,” Fisher said. “His rabbi told some stories about Ruby showing up at his house when the [assassination] happened, crying hysterically. Basically, both in fact said Ruby’s behavior at different times was inappropriate to the scope of the event,” which was part of what Belli was trying to show the jury to bolster the mental illness argument.

An article on the Shearith Israel congregation website describes Silverman as giving a talk last year about his experiences in Dallas, including encounters with Ruby, as well as with another congregation member — Abraham Zapruder, who filmed the Kennedy assassination.

“I think what’s important is that the trial is the beginning of the Kennedy conspiracy industry,” Fisher said. “It does not work without Jack Ruby, the whole conspiracy claim. He fills a lot of voids for a lot of people wanting to say or demonstrate there was a conspiracy.”

The authors delve into the conspiracy theories in the book, writing that “conspiracy buffs, as they were becoming known, suggested Ruby was part of a larger plot and had killed Oswald to prevent him from naming those people who had hired and paid Oswald — and may have even been shooting at the president on that Dallas afternoon.”

“Several people claimed to have seen Oswald and Ruby together prior to Kennedy’s assassination,” but prosecutor Wade declined to call any of them to testify at Ruby’s trial, write Abrams and Fisher. They quote Wade as saying that he felt “there had been no proof Ruby and Oswald knew each other,” while three individuals who argued otherwise had taken lie detector tests and failed.

At the end of Ruby’s trial in 1964, the jurors did not believe he was mentally ill and issued a guilty verdict.
“I felt that the defense had actually made a pretty good case,” Fisher reflected. PJC