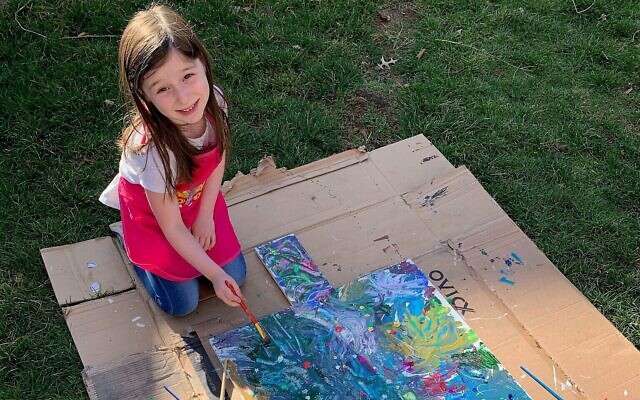 Nina Blank and her sister painted the blank dreidel to be displayed as part of J-JEP's Grand Dreidel Gallery on Sunday, Dec. 13. (Photo by Lydia Blank)

For the last decade, the Joint Jewish Education Program — Congregation Beth Shalom and Rodef Shalom Congregation’s collaborative supplemental religious school — has hosted a holiday carnival, Latkepalooza, typically attracting more than 500 community members. When the coronavirus crisis forced the cancellation of that celebration, Freedman and Kim had to come up with a new way to connect their community during the holiday season.

“What I was trying to figure out with the pandemic is what could we pull off,” said Freedman. “That’s my attitude — instead of ‘We can’t do this, we can’t do that,’ it’s ‘What can we do?’”

Freedman remembered the Carnegie Museum of Natural History’s 2003 public art event, DinoMite Days, when the museum placed 100 dinosaur statues throughout Greater Pittsburgh. The museum invited the community to find each of the dinosaurs, which were painted by local artists and students. 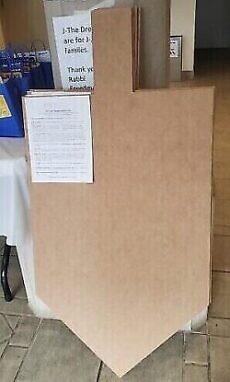 Blank dreidels waiting to be picked up and painted at Congregation Beth Shalom. (Photo by David Rullo)
Freedman decided to use that concept, but with giant dreidels placed in yards across the city.

Freedman’s friend, Dr. Michael Boninger, had a woodshop and helped the rabbi cut 40 4-foot dreidels. Those dreidels have been made available for J-JEP’s students, kindergarten through seventh grade, and their families to paint and display in their yards, or in Freedman’s yard, if they prefer. 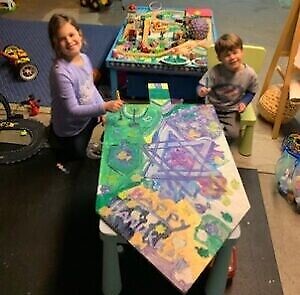 Ellen and Jason Gusenoff work on their dreidel for J-JEP’s Grand Dreidel Outdoor Gallery. (Photo provided by Rabbi Larry Freedman)
The project will not only allow students to show their parents what they’ve learned about Chanukah through the themes they choose in decorating the dreidels, but will provide a means for the wider community to engage.

“People will drive around, and you can either step out and wave hello, or you can stay inside and wave,” said Freedman. “You can make it as social as you want, as distant as you want.”

Lydia Blank, her husband and three children helped to prepare the dreidel they took home. All three children participate in J-JEP. Nina, 5, is a student; Landon, 14, is involved in the school’s eighth-grade program and is training to be a madrich; and Abby, 15, is a madricha. The Blank family’s dreidel has a collage of inspirational words for the coming year. 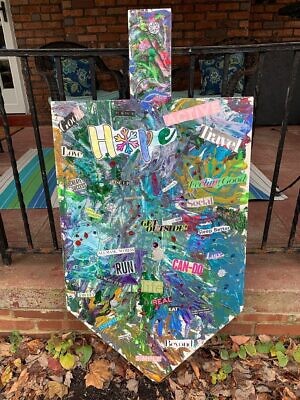 The Blank family’s dreidel (Photo by Lydia Blank)
“We use words like ‘mask up,’ ‘hope,’ ‘get outside,’ ‘life’ and ‘does chocolate make you happy?’” Lydia Blank said.

The Highland Park resident is excited to have the opportunity to connect with other families during this period of forced isolation.

“I think this is a really cool idea that Rabbi Freedman came up with to help families connect because we don’t get to see each other,” she said. “We’ve been doing online schooling on Sundays and it’s been great, but this is another activity to keep everyone involved. This is a way to do something fun and an offline activity to be creative.”

While Freedman was developing the idea of for the dreidel gallery, Kim was working on a separate idea to make up for the lack of this year’s Latkepalooza. She was inspired by the short documentary film “Caine’s Arcade,” which featured a cardboard arcade created by 9-year-old Caine Monroy.

“We asked our families if they’d like to create their own carnival games at home similar to Latkepalooza for Chanukah,” she said. “We’re going to have a big contest to find winners in different categories.”

Students will submit pictures of the games they created, and a winner will be announced on Dec. 13 during J-JEP’s virtual menorah lighting.

“My hope is that we’ll get some really good submissions and then, when we’re able to do Latkepalooza in the future, we can hopefully bring those games in that kids have created and have everyone play them,” Kim said. 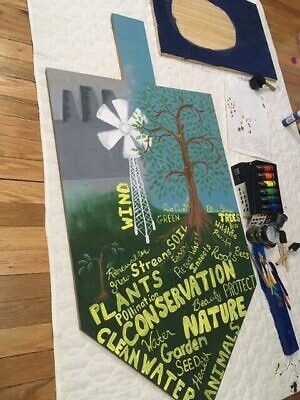