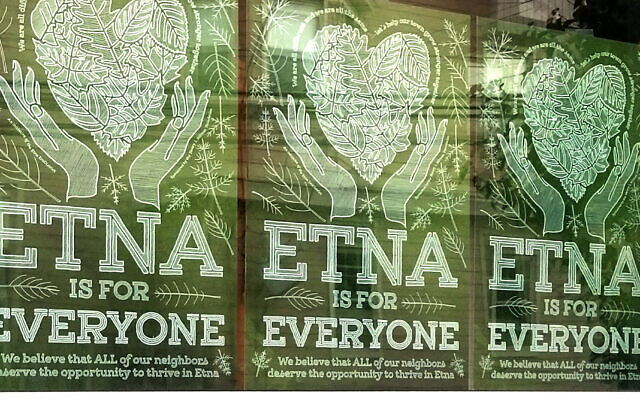 Etna has responded to a Nazi flag flying in its community several different ways, including reprinting signs created by the Etna Community Organization in 2018. Photo by Robert Tuñón.

Megan Tuñón first learned of a flag emblazoned with a swastika flying on an Etna porch from a Dec.14 social media post by Jessica Semler.

“I saw it that Tuesday night,” Tuñón said. “The next day it just seemed like everyone knew about it.”

Semler and Tuñón are both borough council members for the small town that sits across from Pittsburgh on the Allegheny River. The flag was hung from a home in Semler’s ward, and she wanted to do something that would make an immediate statement.

Semler and Tuñón decided to create a fundraiser and reprint signs, created in 2018 by the Etna Community Organization (ECO), that read “Etna is For Everyone.” The GoFundMe campaign Semler launched has raised nearly $1,700 as of press time, and they are in the process of printing 120 signs.

Tuñón is also the director of the ECO, where she works to bring people together and encourages them to lead various initiatives, she said.

“Hopefully, we’ll get a positive response to a very negative thing and show the community doesn’t support this flag or what it stands for, and that Etna is for everyone,” Tuñón said.

Robert Tuñón said that while the police response to an incident of hate in a small community like Etna can be immediate, the community also wanted to quickly show support for those impacted by the hate symbol.

“There are Jewish residents that are hurting by the display,” Robert Tuñón said. “There is also a large LGBTQ community. We’ve heard the most from that group because they understand the history of how the swastika was used and understand that if hate exists it affects us all.”

Robert Tuñón is an architect with Rothschild Doyno Collaborative who, because of his work, has relationships with members of the Pittsburgh Jewish community. He reached out to leaders of the 10.27 Healing Partnership, the Holocaust Center of Pittsburgh and the Jewish Federation of Greater Pittsburgh. The result of that outreach will be a virtual community meeting, “Countering Antisemitism,” on Monday, Jan. 10. The program will not only address concerns over antisemitism but also community trauma and thoughts on how to make the community safer and more inclusive.

Nearly five miles away, the Pittsburgh neighborhood of Highland Park is addressing its own recent antisemitic incident. On Nov. 29, someone smashed the car windshield of Jewish residents and painted a swastika on the front of their home. That night, their Black Lives Matter and Stronger Than Hate yard signs also were stolen.

When Stephanie Walsh, president of the Highland Park Community Council, became aware of the attack, she posted to the organization’s website and Facebook page. Part of what she wrote, posted Dec. 1, the third day of Chanukah, urged community members to speak out against acts of hate and words of intolerance.

“But also, let’s go one step further and commit to living with our neighbors in peace. Period,” she wrote.

Walsh said the victims wished to remain anonymous but that the community wanted to help. They offered to collect donations, and while the victims were appreciative, they said they didn’t need financial assistance. Instead, the HPCC collected cards and letters of support.

Inspired by the book “The Christmas Menorahs: How a Town Fought Hate” — based on a true story that occurred in Billings, Montana, in 1993 — the HPCC also distributed paper menorahs that could be colored and posted in windows, Walsh said.

Like the residents of Etna, the Highland Park neighbors wanted to do more. On Dec. 17, the community hosted the webinar “Community Dialogue on Countering Antisemitism,” led by 10.27 Healing Partnership Director Maggie Feinstein.

Feinstein said she was heartened by the acts of allyship and solidarity in both Etna and Highland Park.

“Anytime things like this happen, it can feel like a snowball rolling downhill,” Feinstein said. “Anytime a community says, ‘We’re not going to let this snowball roll down the hill,’ it can be very empowering. It’s beautiful when you see people working diligently, tirelessly and collaboratively to try and figure out how to make those snowballs stop so that communities don’t feel unsafe.”

Feinstein also will participate in the Etna webinar. She said she is looking forward to providing whatever support the community needs.

Shawn Brokos, the director of community security for the Jewish Federation of Greater Pittsburgh, said that community responses like those in Etna and Highland Park are important.

“It’s the community saying we are not going to let the reprehensible actions of some dictate who we are as a community, and we are going to stand together and be the eyes and ears for one another, which is really helpful,” she said.

Brokos said the reporting of hate crimes has gone up each year, due in part to community awareness. She noted that antisemitism tends to be the barometer for all other forms of hate, and that “if there is a rise in antisemitism, chances are you’re seeing a rise in other hate-related crimes.”

Lauren Apter Bairnsfather, executive director of the Holocaust Center of Pittsburgh, agreed with Brokos, recalling events in Germany before and during World War II.

“The Nazis targeted Jews, they were obsessed with what they did to Jews, but they took actions that were harmful to many minority groups,” Bairnsfather said. “There were instances when people objected to what the Nazis were doing and that made a difference and saved lives.”

She said the support demonstrated by community groups and leaders in Pittsburgh doesn’t surprise her.

Laura Cherner, director of the Federation’s Community Relations Council, praised the responses of not only community groups, but those of borough managers as well.

“We can’t fight antisemitism ourselves, the Jewish community,” Cherner said. “It really is important that we have neighbors and allies supporting us. The support and drowning of hate through action and love has been really heartwarming to see.”

A few days after the flag was hung, it was taken down and burned by a group called Pittsburgh Fasc Watch. Cherner cautioned against such actions.

“It puts the Jewish community in an awkward position of having to say, ‘No, don’t burn a Nazi flag,’” she said before noting that violence is never the answer.

“That sense of vigilante justice is absolutely not where we want to go,” Brokos said. “I understand why people want to react that way, but that’s not what we mean by community support because it just exacerbates the situation and you don’t know how that’s going to have an impact.”

Robert Tuñón said the progression from hate speech, like the flying of a Nazi flag in Etna, to vandalism, like that in Highland Park, to overt violence, like the massacre of Oct. 27, 2018, is obvious.