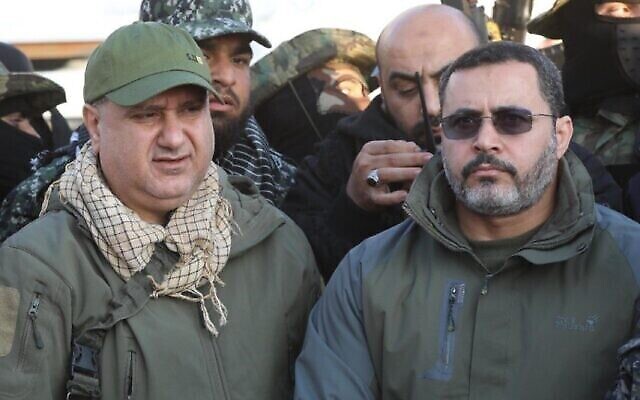 Senior Palestinian Islamic Jihad commanders Khaled Mansour (right) and Tayseer Jabari (left) in an undated photo. The pair were killed in separate Israeli airstrikes on August 5 and 6, 2022. (Courtesy via The Times of Israel)

Khaled Mansour was killed in an Israeli airstrike in the Palestinian city of Rafah, according to officials. The terror group did not immediately confirm his death.

He was the southern Gaza counterpart of Tayseer Jabari, the terror group’s commander in northern Gaza, who was killed in an Israeli airstrike on Friday.

The killing of Jabari was the opening strike of the IDF’s Operation Breaking Dawn. Since then, the PIJ has launched over 350 rockets at Israel, according to IDF estimates.

The head of the military’s Operations Directorate, Maj. Gen. Oded Basiuk, said that according to “all available information,” Israel had now killed the entire PIJ top brass.

Last week, the IDF arrested the terror group’s leader in the West Bank.

“This organization tried to carry out a deadly attack against Israeli citizens and IDF soldiers by launching an anti-tank guided missile, aimed at killing civilians and soldiers,” Basiuk said in a press conference outside the IDF’s headquarters in Tel Aviv.

“We hit and foiled the chain of command [who sought to] execute this attack,” he said, referring to the assassinations of Jabari and Mansour.
Advertisement

Basiuk said that “according to all the information we have, [Mansour] was [struck] along with others.”

“The entire top brass of the PIJ military wing in Gaza were [struck],” Basiuk said.

Mansour was also responsible for many rocket attacks on Israel, according to military officials.

The Israeli air force has conducted numerous strikes in Gaza targeting the Palestinian Islamic Jihad terror group as part of the operation launched Friday to tackle what Israeli leaders said was an immediate concrete threat by the PIJ to Israeli communities.

The operation was launched after several days of closures and lockdowns in Israeli communities near the Strip due to the alert of an imminent attack, with the PIJ seeking to avenge the arrest of its West Bank leader earlier in the week.

Israeli leaders said the operation was started because the PIJ had refused to back down from its plans to attack Israeli targets at the border.
Advertisement

Gaza’s health ministry said Saturday that the death toll from the latest violence in the territory had risen to 24, including six children, but Israel denied conducting a new strike that reportedly killed seven of those, including children.

The IDF meanwhile has begun to call up reservists to bolster its Southern Command, Home Front Command, air defense array and combat troops in the event of further escalation. Defense Minister Benny Gantz approved calling up as many as 25,000 reservist troops, his office said. PJC