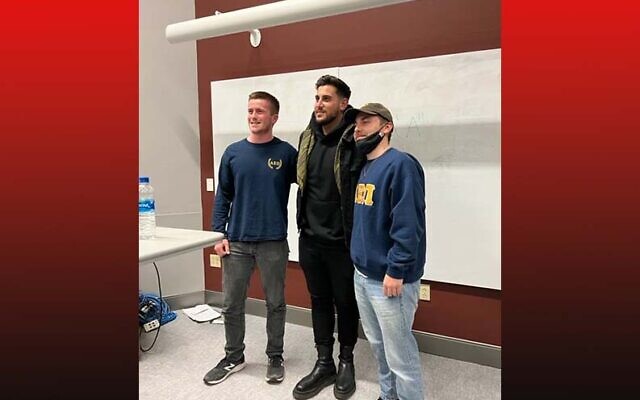 Rudy Rochman believes it’s his mission to narrate the story of the Jewish people the correct way.

The self-identified “activist for Jewish rights,” spoke last week at the University of Pittsburgh at an event organized by Rabbi Shmuel Rothstein, director of Chabad at Pitt, that drew a crowd of more than 80 students.

Chabad brought Rochman to campus as a reaction to some of the courses offered by the university, Rothstein said.

“There are a few classes, such as one that compares and contrasts apartheid in South Africa and apartheid in Palestine, which was a horrible class to give,” Rothstein said. “We’ve been in touch with a bunch of parents and students about a host of things happening on campus.”

Some of the classes, “make us feel very uncomfortable,” he added.

Rochman said he has dedicated his life, in part, to speaking against antisemitism on college campuses and other intellectual spaces. He decided to attend Columbia University because he found it listed by a Jewish freedom center as the No. 1 antisemitic school in the United States.

“I’m dedicated to bringing light where there’s darkness,” Rochman said. “I came to empower the students I spoke to. I said, ‘I’m not the answer for your campus. I’m here for one day. Let me share my experiences, my conclusions, my journey. The things that have been effective in the breakdown of situations. You need to use that to change things on the ground.’”

Rochman learned early that it was important to be proud of his Jewish identity. Born in France, he also has lived in Israel and the United States. His grandparents, he said, spent time in Morocco, Algeria and Poland, where they were expelled for being Jewish.

“It taught me that no matter where we’re born or grew up, where we travel or what our passports say, we’re always Jews,” he said.

It was an antisemitic event in London when he was 7 that shaped his worldview.

“Me and my mother were kicked off a bus for being Jewish,” he said. “My mom was wearing a shirt in Hebrew; the bus driver was a neo-Nazi. He literally took my mom and threw her off the bus. It taught me that, no matter what, they’re always going to do this.”

Before attending college, Rochman joined the Israel Defense Forces and served in the Paratroopers Brigade from 2011 to 2013.

While at Columbia, Rudy Rochman joined the “Students Supporting Israel” movement. SSI has more than 1,000 members in more than 50 chapters including United States, Canada and Argentina.

Rochman’s most harrowing experience with antisemitism came while filming a documentary about disconnected Jews in remote communities last year. He traveled to Nigeria with two other Israeli filmmakers.

After meeting with the Igbo Jewish population, Rochman and his team were arrested by the Nigerian secret police.

“We knew that Nigeria would be dangerous,” he said. “It’s one of the most antisemitic countries in Africa. We knew that our lives were at risk, but we were taking precautions, had hired security.”

Rochman said after being arrested at their hotel, he was driven 12 hours away and forced to live in a cage for three weeks.

“The first week there was no food at all, no shower,” he said. “We were in a small 3-meter-by-3-meter cage full of rat feces and human urine and bacteria-infested mold everywhere, bugs dead and alive, crawling, the most disgusting condition you can ever imagine. Without food, without light.”

They were eventually transferred to another location, where they were given one meal a day and forced to live with Boko Haram terrorists, Rochman said.

Because of U.S. pressure, Rochman and his team were freed but not before being forced to stay in a freshly painted room filled with toxic chemicals that burned his lungs.

Not wanting to become the story, Rochman said the focus should remain on Nigeria and its Jewish community.

“We eventually made it back to Israel,” he said. “For us, we went through horrible experiences, but it was three weeks and we’re out. The Igbo has faced this every day for generations, and they’re still facing it.” PJC