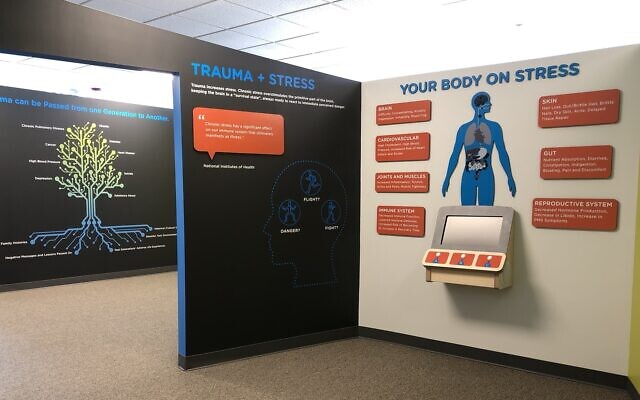 Part of the Healing Rivers Project exhibit. (Photo courtesy of Center for Victims)

About six months after the shooting at the Tree of Life building in Squirrel Hill, Rabbi Ron Symons visited the Healing Rivers Project.

The first-of-its-kind project, built from the ground up as a complement to curricula by the South Side group Center for Victims, was new that spring – and blossomed with the glow of a new kind of innovation. An educational initiative, Healing Rivers provides a safe space for exhibit attendees to reflect on the meanings of trauma, support and self-care, as well as to seek ways to heal.

Walking through the exhibit, Symons said he had an “aha” moment.

“I said, ‘This has to be shared – and not just with those most impacted by what happened to the congregations in the Tree of Life building,’” said Symons, the senior director of Jewish Life at the Jewish Community Center of Greater Pittsburgh. “I realized the interfaith community would benefit greatly from having these kinds of conversations.”

So, Symons did what came naturally. He brought Christians, Muslims, Hindus, Sikhs and others to Healing Rivers and, together, they studied Torah. One passage stood out – Moses’ treatment of Aaron and Eleazar on Mount Hor.

“Was Moses victim-centric? Was he trauma-informed?” Symons asked. “The answer is ‘No.’”

Stephanie Walsh is the executive in residence at Healing Rivers and boasts 42 years of professional experience dealing with trauma. She talks about the exhibit – which was built, in part, through the eyes of the Pittsburgh firm Visionary Effects – in terms of the emotions and themes it stirs.

“How does our brain work? How does our nervous system work?” posed Walsh. “We’re built on the same model and all of us are human beings. We are formed from infancy up on the experiences we have in the world.

“All of this leads up to that your history does not dictate your destiny – with wellness strategies, you can mitigate your risks,” she added. “We talk about racism, social injustice, medical inequities, educational inequities, refugees – these are all things that are sources of trauma.”

The Healing Rivers exhibit does not assign blame; mostly, it breaks down humans’ physical, emotional and spiritual reactions to outside factors. Walsh said it refuses the “you’re damaged” tag and looks at the ways the brain and body are overworked, just by doing the jobs expected of them.

Or, as Symons puts it: “We can’t change the weather but we can dress for it. Not every day is going to be rainy. But you’ve got to be okay when it rains.”

Gay Fogarty joined the board of Center for Victims after experiencing the Healing Rivers exhibit. It was that powerful and that profound, she said.

“It was the broadest definition I have seen for trauma,” Fogarty said. “And the final part is: ‘Here’s help!’”

Fogarty holds a doctorate in organizational development but, when she speaks, her background and studies in social work are evident.

“I’ve seen people who see themselves as the victim and as a victim it’s always somebody else’s fault,” Fogarty said. “This really said, ‘Yes, you are the victim. But you can turn this around.’”

The exhibit is supported, in part, by a portion of an $3.86 million Antiterrorism and Emergency Assistance Program grant from the Office for Victims of Crime of the U.S. Justice Department.

“We empty our hearts to the members of the Tree of Life, Dor Hadash and New Light Jewish congregations in the wake of this incomprehensible tragedy,” said Jessica Hart, director of the Office for Victims of Crime, in a statement released when the grant was announced last month. “We recognize that programs being supported by this funding are lifelines to this community; and we pray the services and hope they offer will provide an unwavering foundation for those impacted by this act of hate.”

Though the exhibit was not built in response to or connection with the 2018 Pittsburgh synagogue shooting, Symons said it greatly helped him process his feelings about the traumatic incident in his community.

“There isn’t a day that goes by that I don’t remember the events of Oct. 27, 2018,” Symons said. “But I am better prepared to live my life fully because of what I learned at Healing Rivers.”

Though the exhibit is now largely closed due to COVID-19, Center for Victims officials said they’re not going anywhere. For inquiries and to schedule trainings, contact Stephanie Walsh at 412-482-3240 x500 or swalsh@centerforvictims.org. PJC