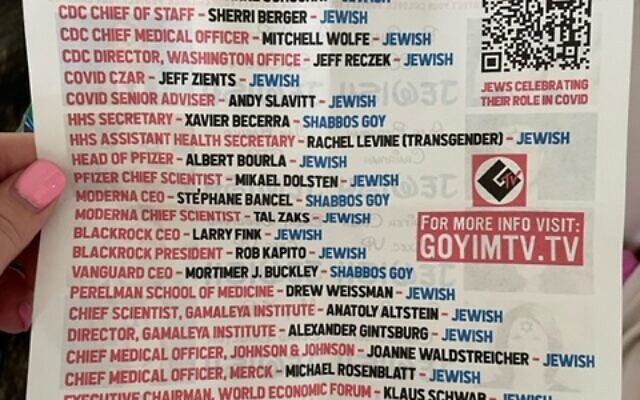 Pleasant Hills residents woke on May 30 to find antisemitic flyers distributed in their neighborhood. Photo by Michelle Susa.

For the third time in as many months, members of a Pittsburgh-area community woke to find antisemitic flyers distributed in their neighborhood.

On Monday, May 30, Pleasant Hills resident Michelle Susa posted to the Facebook group “Jefferson Hills/Pleasant Hills/Surrounding Areas-What’s Going On” that her family had found a flyer at the end of their driveway. Other neighbors responded to the post saying that they, too, received the hate message and posted photos of what was they found.

Like other flyers found in both Squirrel Hill and Mt. Lebanon recently, the double-sided messages were packed in a lunch bag filled with rice and included antisemitic messages penned by the hate group Goyim Defense League.

It appears that several different messages were distributed as part of the hate campaign. Some Facebook group members posted images of a flyer with the familiar antisemitic trope that Jews control the media. Another post showed a flyer stating that “Every single aspect of the Ukraine-Russia War is Jewish.” A photo Susa posted included the statement that “Every single aspect of the Covid agenda is Jewish.”

Susa said that her husband found the flyer in their driveway when he went out around 11 a.m. to cut the grass. 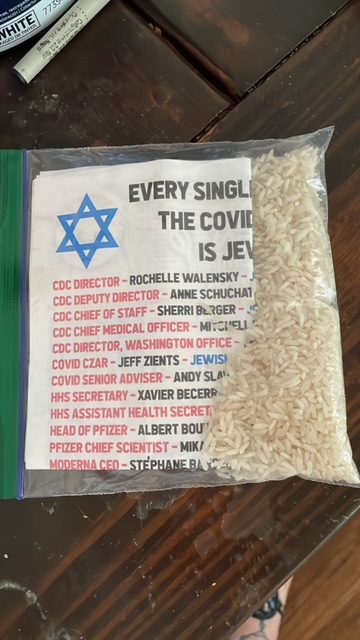 A hate group used bags of rice to weigh down their antisemitic messages in Pleasant Hills. Photo by Michelle Susa.

“That’s when I contacted Pleasant Hills police because I found it very inappropriate to pass out,” she said. “I looked around the neighborhood, and other people had them, too.”

The Pleasant Hills resident said the flyers were distributed on at least three streets in her neighborhood.
She called the flyers “unsettling.”

Shawn Brokos, community security director for the Jewish Federation of Greater Pittsburgh, said she is unsure why the South Hills community was targeted but urged anyone who received a flyer to contact the police.

“Any time you get more information, it helps put the pieces together,” she said.

Brokos said the distribution of the flyers was part of a national campaign the hate group is conducting.

The group, she said, attempts to be provocative to increase its profile and raise money, capitalizing on the current wave of antisemitism.

GDL, she said, has not traditionally been a violent group but noted that it is, at times, confrontational.

The danger, though, is when the group’s messaging provokes someone else to violence, she said.

“GDL is not known to pose a threat, but if their propaganda gets into the hands of someone and inspires them to act in furtherance of their beliefs, that’s where the threat becomes reality,” Brokos said.

One of the challenges for law enforcement, Brokos noted, is that these types of activities skirt the line of the First Amendment, making it difficult for police to investigate.

And, while it’s important to report any new information to the police and Federation, Brokos said that she didn’t think the current activity raised the threat level in the city — partially because there have been so many other antisemitic incidents over the last eight months. In September 2021, Tyrone Correll was arrested for simple assault, harassment and ethnic intimidation. Christian Williams was arrested on April 17 for making antisemitic comments and threats. On May 8, David Aul was arrested after choking a victim in a Murray Avenue store. On May 17, a white male in a red Dodge Ram with a landscaping trailer attached yelled antisemitic comments at Jewish community members.

Aul was released on May 26 from UPMC Western Psychiatric Hospital, Brokos said, where he was transferred after his arrest for a psychiatric evaluation. The Squirrel Hill resident is back in the neighborhood and was seen by community members, Brokos said.

“It was unnerving,” she said. “I didn’t get any reports of inappropriate or threatening behavior, but he was walking around Murray Avenue without a shirt on, so he was very noticeable.”

Brokos said that anyone observing Aul exhibiting threatening behavior should move to safety and call 911 immediately.
“His behavior can be erratic, and we have to be on the lookout for that,” she said. PJC