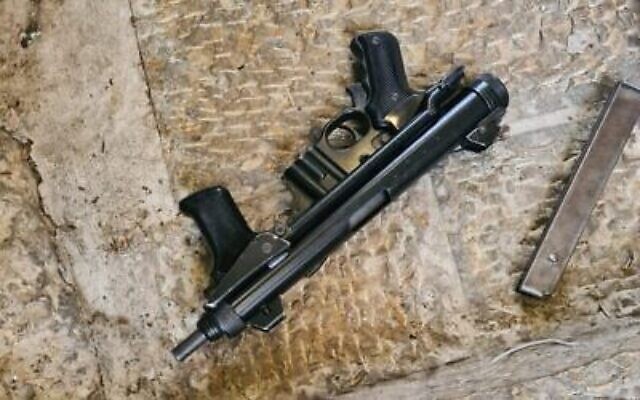 A police photo shows a machine gun from a shooting attack in Jerusalem’s Old City on Nov. 21, 2021. (Israel Police)

A Hamas gunman opened fire in the alleyways of Jerusalem’s Old City on Sunday morning, killing one Israeli man and wounding four others, two of them seriously, Israeli officials said.

Police officers at the scene opened fire at the terrorist, a 42-year-old Palestinian man from East Jerusalem, and killed him, according to police.

Hamas hailed the attack, calling it a “heroic operation,” and identified the terrorist as a member of the organization, Fadi Abu Shkhaydam, a Hamas leader in the Shuafat refugee camp in East Jerusalem, where he lived.

According to police, Abu Shkhaydam entered the Old City armed with a Beretta M12 submachine gun and opened fire at three Israeli men who were walking through the area, near the Chain Gate entrance to the Temple Mount, fatally wounding one of them and seriously injuring the other two.

Two female police officers rushed to the scene from one side of the alleyway, opening fire at Shkaydam. Shortly thereafter, two male officers ran in to assist them.

“[The gunman] moved through the alleys and fired quite a bit. Luckily, the alley was mostly empty because otherwise — heaven forbid — there would have been more casualties. The entire incident lasted 32 or 36 seconds. The actions of the female officers was — operationally — at the highest possible level,” Public Security Minister Omer Barlev said at the scene of the attack.

“A victim with a serious head injury, who was in his 30s, was evacuated [to the hospital] while receiving CPR, with no vital signs. A trauma team continued the CPR but was forced to pronounce his death,” Hadassah said.

The casualty’s name was not immediately cleared for publication. He was the first Israeli civilian to be killed by Palestinian violence in over six months, since May’s 11-day conflict with terror groups in the Gaza Strip, which killed 12 civilians in Israel.

The three Israeli men who were shot in the attack were walking through the area as they left the nearby Western Wall, where they had been praying, still wrapped in prayer shawls and wearing tefillin, one of the victims said, speaking from his hospital bed.

Two police officers, aged 30 and 31, were lightly wounded in the exchange, likely by shrapnel, according to the Israel Police. They were taken to Hadassah Ein Kerem for treatment.

In video from the scene, a voice off camera can be heard repeatedly yelling “help” in Hebrew, followed by a burst of gunfire. Further shots can then be heard as police appear to chase after the assailant.

Immediately after the shooting attack, police closed the Temple Mount to visitors.

Barlev said that the attack appeared to have been planned in advance.

“The terrorist was a member of Hamas’s political branch who regularly prayed in the Old City. His wife fled abroad three days ago, and he used standard weapons that are not commonly available in Israel,” Barlev said in remarks at the scene of the attack.

Palestinian media reported that Abu Shkaydam’s wife and children had traveled to Jordan.

Initial reports indicated Abu Shkaydam had attempted to dress up as an ultra-Orthodox man and that a second assailant may have been involved, but these were later found to have been incorrect.

The use of a Beretta M12 submachine gun in the attack was unusual. Most Palestinian assailants use locally made, jury-rigged weapons, known as Carlos, which are far cheaper than mass-produced proper guns, but are also significantly less accurate and far more prone to jamming. In contrast, superior, factory-made weapons are used by gunmen with ties to terrorist organizations who have the resources to purchase them. At least two ammunition magazines were recovered at the scene, along with a knife.

Hamas quickly took responsibility for the attack, saying it was the “price” for Israel’s actions in Jerusalem.

“The message of the heroic operation is a warning to the criminal enemy and its government to stop the attacks on our land and our holy sites. [Israel] will pay a price for the iniquities it commits against Al-Aqsa Mosque, Silwan, Sheikh Jarrah and elsewhere,” the terror group said.

The incident came several days after a stabbing attack in the Old City, in which a pair of border guards were hurt.

“This is the second terrorist attack in Jerusalem in recent days. I have instructed the security forces to mobilize accordingly and demonstrate vigilance, also due to concern over copycat attacks,” said Bennett. PJC