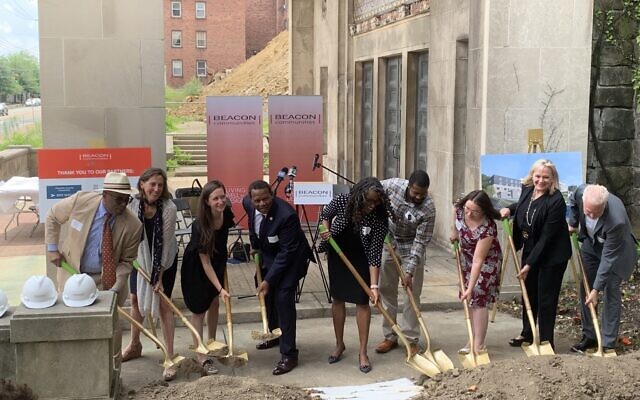 Construction has begun on the transformation of the former B’nai Israel Synagogue at 327 N. Negley Avenue into 45 mixed-income apartments, an urban farm and a water-reclamation system.

“We think it’s very important to recognize all of the effort it’s taken to get here,” said Michael Polite, executive vice president of Beacon Communities, which is heading the project. “After the last 17 or so months, we have the opportunity to come together with our friends and neighbors to celebrate something.”

The adaptive-reuse project will cost $18.5 million and is financed through a mix of state, local and private funding sources. The Pennsylvania Housing Finance Agency provided financing through a low-income housing tax credit allocation, first mortgage loan and other funds. Other funding came from the Urban Redevelopment Authority of Pittsburgh, the Housing Authority of the City of Pittsburgh and BNY Mellon.

B’nai Israel was founded in the early 1900s and opened its synagogue in 1923. Attendance boomed as many Jews moved from the Hill District into parts of Pittsburgh, then referred to as “East End suburbs.” In the 1970s, the congregation’s membership began to decline as the Jewish population moved further into neighboring suburbs, and in 1995 B’nai Israel closed. The building was most recently used by the Urban League of Greater Pittsburgh Charter School. 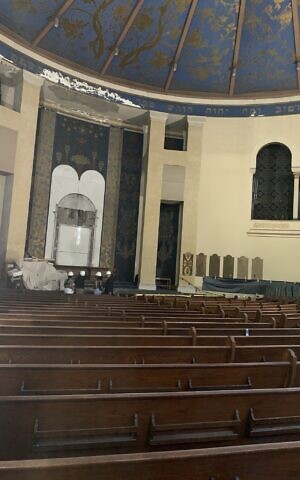 The synagogue will be transformed in four parts, according to officials. First, the school building will be repurposed to build a 45-unit mixed-income environmentally focused housing community. Second, the sanctuary (also known as “The Rotunda”) will be transformed into a 10,000-square-foot multi-use space with a focus on performing and visual arts, as well as a community-centered space. Next, the front lawn will be transformed into a regenerative farm. Finally, a microgrid — a battery that stores solar generated electricity — will be installed on the residential building, allowing the site to be energy self-sufficient.

Reverend Ricky Burgess, who serves on Pittsburgh’s City Council (District 9), spoke at the event of the miracle of God’s presence, referencing how the children of Israel walked on dry land after the splitting of the Red Sea as an example.
“This showed that God would meet the needs of its people,” Burgess said. “This facility will also be a place which meets the needs of its people.”

Following the groundbreaking ceremony, attendees were invited to take guided tours inside the building where work is already underway.

Beacon Communities does not usually hold groundbreaking ceremonies, said Beacon Communities CEO Dara Kovel, but an exception was made at 327 North Negley Residences because of the anticipated impact of the property’s repurposing.
“This groundbreaking makes community building truly aspirational,” she said. “We are excited for 327 Negley Avenue to be one of the next great accomplishments in Pittsburgh.” PJC