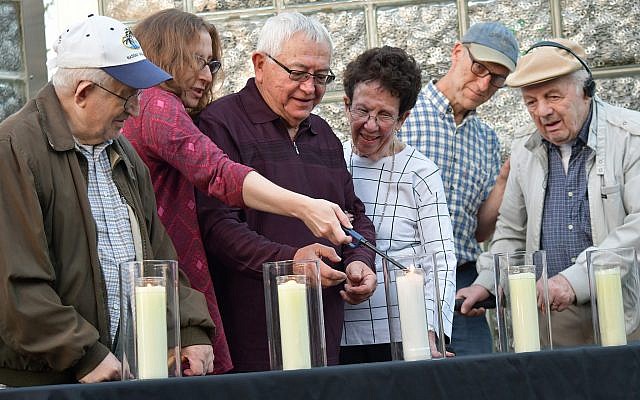 From left: Holocaust survivors Sam Gottesman, Harry Schneider and his wife, Patty Schneider, and Moshe Baran light memorial candles with the help of Lauren Bairnsfather, director of the Holocaust Center of Greater Pittsburgh in 2018. (Photo courtesy of Community Day School)

About a half-dozen high school students who took part this school year in the Samuel M. Goldston Teen Philanthropy Project recently decided to donate $3,000 of their own money to the Holocaust Center of Pittsburgh. Abby Rickin-Marks, a member of the Goldston project, said the decision to support the Holocaust Center was an easy one.

“The Holocaust Center has become a vibrant place for Jews and non-Jews alike all interested in learning about the Holocaust and genocide,” said Rickin-Marks, who graduated last month from Fox Chapel Area High School. “With so many upcoming projects, including their new partnerships with Chatham University and Tree of Life, we thought it was our duty to give back to an organization that is making such tremendous change in the community.”

Lauren Bairnsfather, who heads the Holocaust Center of Pittsburgh, said she was touched by the donation.

“Abby has been engaged with us and our expanded mission and she said that was important to the teens,” Bairnsfather said. “What a stamp of approval, what an endorsement, from the people we’re most trying to meet.

“This was really special,” she added. “Every donation is meaningful, but when it comes from a group of teens interested in philanthropy and community building, that’s really, really awesome.”

The Goldston project was created by Pittsburghers Edward and Linda Goldston in memory of their son, Sam, said Maria Carson, director of teen leadership for the Jewish Community Center of Greater Pittsburgh. The Goldston family will match any donation the project’s teen members make.

“The purpose of this fund and project is to let Jewish teens learn about grant-making, grant-giving and philanthropy,” Carson said. “They learn how to analyze charities and think about which charities they want to support — from a holistic lens.”

According to Carson, the larger goals of the project are for high school students to foster a deeper connection to their Jewish identity, develop skills needed to become leaders and changemakers in their own communities, and grow and deepen relationships with the broader Jewish community.

Prior to this year, the Goldston Project involved b’nai mitzvah-aged students, but this year a new version of the program was piloted for students in grades 9-12.

Sharon Perelman, director of planned giving at the Jewish Federation of Greater Pittsburgh, was influential in developing the program and manages the Goldston fund at the Federation, Carson said.

Rickin-Marks said she and others in the group walked away from the Goldston cohort this year with tremendous pride.
“In my personal opinion, few experiences have made me feel like a better member of the community,” Rickin-Marks said. “Working in a group toward a common goal, a goal meant to empower our local community, allowed me to continue my work in finding inequities in our community and, more specifically, the Jewish community.” PJC