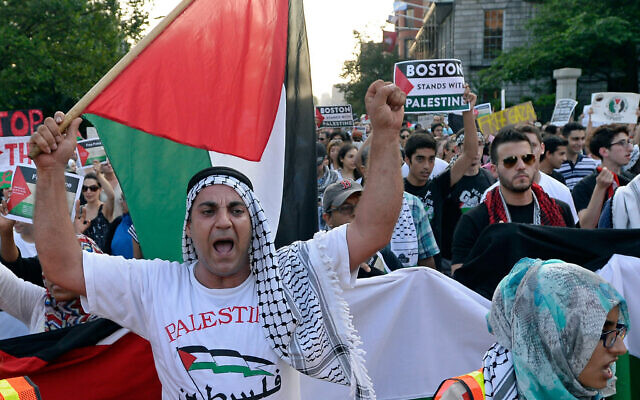 (JTA) – The global Boycott, Divestment, Sanctions movement targeting Israel has disavowed a controversial website mapping Boston-area Jewish groups a day after lawmakers urged a federal investigation of the project’s potential to be used by extremist groups.

The announcement by the BDS movement on Wednesday aimed to distance the group from the Mapping Project, an anonymous collective of Boston-area pro-Palestinian activists. The project lists the names and addresses of Massachusetts Jewish groups, including schools, community funds and synagogue organizations, that it claims are promoting “local institutional support for the colonization of Palestine” and “other harms.”

“The Palestinian BDS National Committee, the broadest coalition leading the global BDS movement for Palestinian rights, has no connection to and does not endorse the Mapping Project in Boston, Massachusetts,” the BDS movement said in a statement posted to its official Twitter account. “Endorsement of this project by any group affiliated with the BDS movement conflicts with this affiliation.”

Among those politicians were the 37 members of Congress, led by staunchly pro-Israel Democrat Josh Gottheimer of New Jersey and Republican Don Bacon of Nebraska, who signed a letter Tuesday urging an investigation of “the use of the Mapping Project by extremist organizations.” The letter was addressed to Attorney General Merrick Garland, Homeland Security Secretary Alejandro Mayorkas and FBI Director Christopher Wray, and it claimed the Mapping Project was “associated with the BDS movement.”

“We fear that this map may be used as a roadmap for violent attacks by supporters of the BDS movement against the people and entities listed therein,” the letter says, while noting that the FBI “is already tracking developments.” Signatories included some of Congress’ most vocal pro-Israel voices on both sides of the aisle, including Reps. Haley Stevens, Ritchie Torres and Dan Meuser, as well as freshman Democrat Shontel Brown, who won her close Ohio race last year with the help of pro-Israel groups.

The letter followed an earlier round of condemnations from mostly Massachusetts politicians, including both of the state’s Democratic Senators and progressive Squad member Rep. Ayanna Pressley. Local Jewish groups including the New England Anti-Defamation League and the Jewish Community Relations Council of Greater Boston, who were named on the project’s website, said the project was a deliberate effort to target Jews and could encourage antisemitic extremist acts.

In the same statement in which it condemned the Mapping Project, the BDS movement also condemned “the cynical use of this project as a pretext for repressive attacks on the Palestine solidarity movement,” singling out the ADL and AIPAC as “apologists for Israeli apartheid.”

The Mapping Project itself has not returned multiple Jewish Telegraphic Agency requests for comment.

For its part, BDS Boston continued to buck the national movement by supporting the Mapping Project on its own social media account, pinning its initial “Friends” tweet to its profile page and retweeting support of the project from other activist groups.

“BDS Boston continues to feel that the Mapping Project is an important source of information and useful organizing tool,” the group said in its own statement Wednesday, while also stating that the group “is its own collective that works autonomously from BDS Boston.” PJC