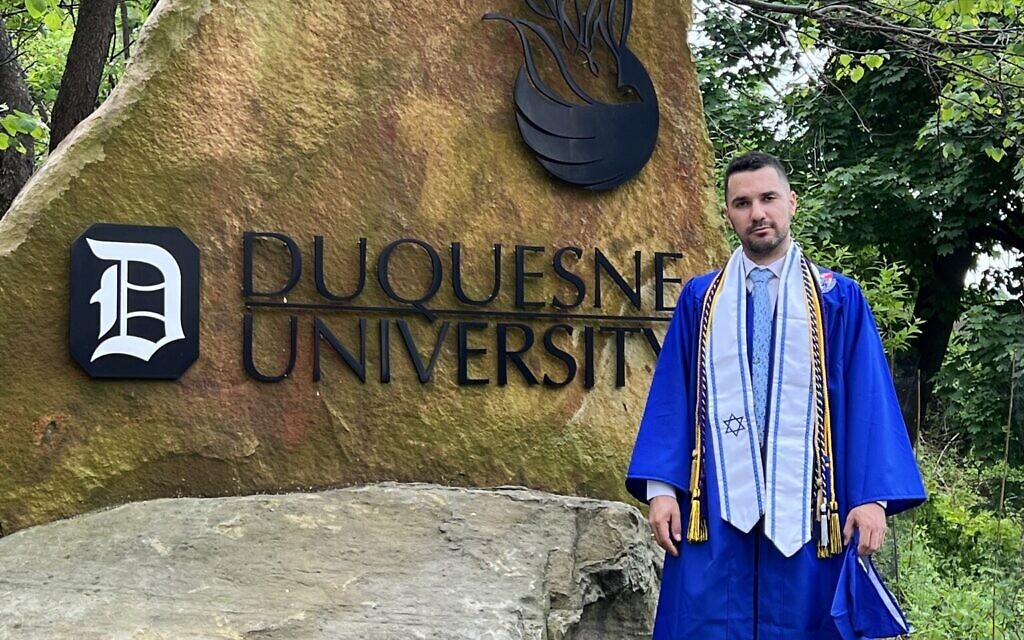 On Friday, May 13, Shai Maaravi officially became a Pittsburgher.

Crossing the stage in front of more than 1,500 members of the Class of ‘22, the Golan Heights native accepted his Duquesne University degree — one of several possible prerequisites for Pittsburgh “citizenship” — for which he amassed enough credits for not one, not two, but three majors: accounting, finance and information systems management.

Though the details took almost a decade to sketch out in real time, Maaravi knew he would find himself here as far back as 2015. That’s when the young man, then 18 and about to start a stint in the Israel Defense Forces, first came to Pittsburgh with his Israel Hockey Academy team.

After arriving, he met the Pressmans, Jews from Squirrel Hill by way of Canada, who became his American family. And he kept coming back to Pittsburgh. An elite athlete — he played and continues to play ice hockey for Israel’s national team — he got breaks in his service every few months when he’d trek back to the Steel City and live with the Pressmans.

It was nothing less than a love story between an immigrant and a city built by immigrants.

“Staying was kinda the plan,” Maaravi said. “School in the States is expensive — I could’ve gone to school in Israel for a fraction of the price … But I was hoping for this. I didn’t think I’d have three majors, but the plan was to get a job, stay here.”

Yes, Maaravi already has found work — and work whose sponsorship can keep him in the United States while employed. He starts as a technology risk consultant for EY in July.

The Pressmans played a key role in Maaravi’s ability to build a new home for himself in Pittsburgh.

Stacey Pressman said her daughter Emily helped bring Maaravi’s team to Pittsburgh as part of a bat mitzvah project. The family instantly took a liking to Maaravi, a meticulously spoken young man who attended the 2015 trip as an assistant coach.

“We sort of connected,” Stacey Pressman said. “I knew there was something different about him, that he had something to offer.”
To the Pressmans, housing and feeding and counseling Maaravi was not, necessarily, a mitzvah.

“We figured Pittsburgh would be good for him,” she said. “Duquesne was really a perfect fit and a good place to play hockey, too. I’m just a person who likes to help others.”

When nudged, Stacey Pressman admits Maaravi fits into a sort of philosophy; she is outspoken about her Judaism and Jewishness, and feels exposure to Jews is the best way to fight antisemitism. She has helped Israelis visit Pittsburgh and, in some cases, resettle here, and has counseled visiting Israelis to help at the Emma Kaufmann Camp in West Virginia.

“But Shai’s special,” she said. “There’s no doubt about that. He wants to help. And that just made me want to help him.”

During his time at Duquesne, Maaravi led the Jewish student organization as president. When the Oct. 27, 2018, synagogue shooting happened, he immediately rallied his hockey peers for fundraisers and awareness campaigns.

Maaravi’s birth family — the Maaravis of Katzrin, a set of parents and two older siblings — came to Pittsburgh for commencement. Stacey Pressman said it was a joy for both of Maaravi’s families to be together for the momentous occasion.

“It’s in my nature to help and, in the process, I’ve gained a family in Israel,” she said. “It goes both ways.”

And what’s next for Maaravi? A little time to reflect, a little work and a little golf, he joked.

“I’ll get to do, hopefully, a little bit of traveling, and preparing for the CPA exam,” he said. “I’m going to enjoy my summer — I haven’t had free time for a little bit.” PJC