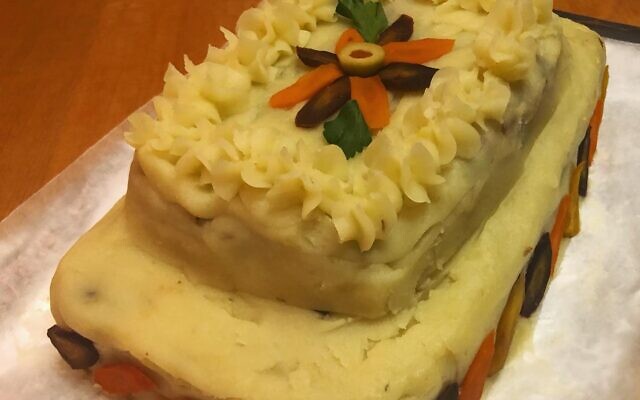 Abby Goldstein created an ‘imposter cake’ for a challenge in her Facebook group, “2020 Coronabake Challenge,” made from meat loaf and mashed potatoes. (Photo courtesy of Abby Goldstein)

The pandemic hobby. It’s a thing.

Since March, millions of Americans, flush with spare time and limited options for socializing, have started making their own sourdough bread, playing the ukulele and discovering more about the birds that visit their backyards.

Pittsburgh’s Jewish community has embraced this trend, learning new skills, building virtual communities and starting projects they previously put off due to lack of time.

Abby Goldstein, a self-described “baking fan,” decided to spend the extra time on her hands by honing those skills.

“Learning how to bake different, harder and more challenging projects has been a goal of mine, so, I decided to start when the lockdown began,” she said.

Coronavirus restrictions took effect on March 13, and on March 14, Pi Day, Goldstein marked by occasion by baking — what else? — a pie.

The Churchill resident soon expanded her solo baking endeavor by creating a Facebook group, the “2020 Coronabake Challenge.” The group currently has more than 2,100 members, amateur bakers from as far away as Australia and Romania.

Goldstein, executive director of Public Radio Program Directors Association, initially planned daily challenges for the group, but she soon learned that level of commitment was hard to maintain.

The group settled on weekly challenges which Goldstein, a “Great British Baking Show” fan, posts on the group’s Facebook page.

“People have a week to make the challenge or they can go back to the list and look up past challenges,” she said.

Included in the group’s 65 challenges to date have been tried-and-true staples like pies and chocolate chip cookies; items that require a more delicate baking touch, including choux pastries and macarons; and the less easy to define dishes such as “imposter bakes,” requiring participants to make something that looks like something else.

“I made a meatloaf that looked like a cake and iced it with mashed potatoes,” Goldstein said.

The group has provided its members with more than a way to simply increase their baking skills.

“People have commented that this group has sort of been their savior through the pandemic, that they go every day to see what people have posted,” Goldstein said. “I’ve made friends from all over the country — in fact, all over the world.”

Environmental Charter School eighth grader Tali Blitstein also has tried her hand at baking during the pandemic, but with a focus on challah. 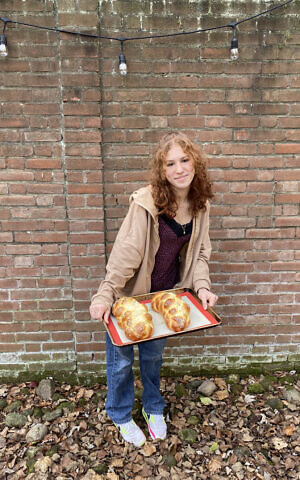 Spending 10 months baking one thing over and over might not sound like much of a challenge, but Blitstein has upped her bread game, moving beyond the traditional Shabbat loaf to include flavors like apple cinnamon, sesame, Israeli spices and Nutella. She also has tried her hand at various styles of challah, including a six-braid bread, which she said “probably took me six weeks to learn.”

Blitstein gets ideas online and from social media sites like Instagram, and shares her creations with neighbors.

With more time at home these days, Michoel Dovid Leopold has decided to focus on getting in shape.

“I’m an accountant and usually working in the office super long hours,” Leopold said. “Because of the pandemic, I’ve been working from home and thought that since I don’t have to drive, I should work on becoming healthier, so I started exercising from home.”

The Squirrel Hill resident uses his time on his stationery bike to listen to podcasts.

“Half the time I listen to Jewish podcasts — there is a multivolume set by the Lubavitcher Rebbe that I’m listening to,” he said. “The other half of the time I’ll listen to more informal or motivational podcasts.”

Carrie Nardini, of Peters Township, and her family enjoy podcasts as well while partaking in a pastime they have been doing together since the start of COVID-19 restrictions: painting miniatures that are used for cooperative desktop games.

“It’s along the lines of fantasy and Dungeons and Dragons gaming,” Nardini said. “These miniatures go with a lot of different games. There are Star Wars and fantasy, like orcs and ogres and sea creatures.”

Nardini did not have to look far for her new hobby. Her husband, Enrico, a former teacher, owns Drawbridge Games in Castle Shannon.

“It’s made my husband super happy to share with me and it’s something my kids enjoy doing with me, as well,” said Nardini.

Ria David also has delved into the arts, taking up the electric bass, while spending more time at home.

David is the president and co-founder of Cybergenetics, a company which focuses on solving complex DNA evidence. The Congregation Beth Shalom member played guitar and piano as a teenager and thought she would try the six-string again. Her husband, a guitar player in Beth Shalom’s band, suggested the bass instead.

“My goal is to be able to do the opening of ‘Dazed and Confused’ by Led Zeppelin,” she said.

A couple times each week, she concludes “a long, hard day dealing with all the crazy stuff we do in our business” by practicing bass guitar for about an hour.

David’s new hobby has been contagious.

“One friend, after hearing what I was doing, said she’d always wanted to play drums,” David said. “For her birthday, her husband bought her an electronic drum set. I’ve got another friend who’s been meaning to buy a keyboard. And so, our goal is, in the summer, when we can actually get together, we might start a group.”

One other benefit of David’s new hobby: “I can now open jam jars with my fingers,” she said.

Rabbi Eli Seidman, who recently retired from the Jewish Association on Aging, also has taken up an instrument — the saxophone, which he chose for its jazzy and bluesy qualities, he said.

Seidman has already learned a few simple songs, he said. Given the time of year, it’s not surprising they happen to be Chanukah tunes, including “Ma’or Tzur” and “I Have a Little Dreidel.” He credits Rabbi Yitzchak Cowen with helping him learn his newfound instrument.

“I choose a Jewish song and Rabbi Cowan gives me sheet music or I find it online,” Seidman said. “When I learn it, I play it for my wife and send it to my kids on WhatsApp. That’s fun. It enhances Chanukah for me.”

South Hills resident and gun collector Andrew Neft also has begun a new hobby. He bought an ammunition reloading press and is refilling the spent cartridges he has collected over 10 years of practice shooting.

Neft has wanted to try his hand at refilling cartridges for some time, and while he is not afraid to try different crafts at home, he acknowledges that working with bullets is a little more technical than building a birdhouse or working in the lawn.

“You have to make sure you have the right powder in the casing, that the primer is in there, that you have the right shell loads,” Neft said. “There are guides that come out every year — every powder manufacturer has a guide as to how many grains of their powder you need to use.”

And what if any of those measurements are incorrect?

“You could blow the gun up,” Neft said.

Karen Skoop Taylor calls herself a stay-at-home mom, but the mother of two runs a craft business from home and works with entrepreneurs through her own network marketing business.

She decided to take classes about the United States Constitution because of the pandemic and the closing of various businesses, she said.

“My first thought was, ‘Is this even legal? Is this constitutional?’” she said. “I got a copy and started to read it, but it’s very vague and hard to decipher.”

“I got so interested in it that I became a Constitution coach and help others navigate their way through it, as well,” Taylor said. PJC