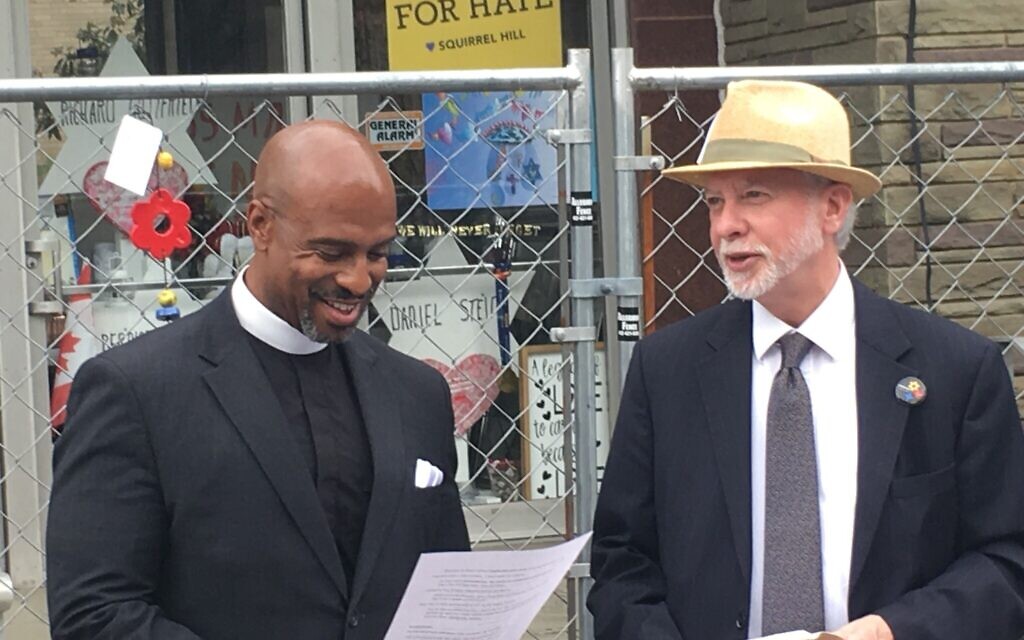 Pastor Eric Manning and Rabbi Jeffrey Myers gather outside the Tree of Life building in 2019. Photo courtesy of Tree of Life

Amidst a season of action, during which thousands nationwide have protested daily since the May 25 death of George Floyd, two spiritual leaders found it prudent to pause, sit before their screens and engage in conversation.

Pastor Eric Manning, of Mother Emanuel AME Church in Charleston, South Carolina, joined Rabbi Jeffrey Myers, of Pittsburgh’s Tree of Life*Or L’Simcha, on June 10 for an hourlong discussion dedicated to race, friendship and finding a path forward. The event was broadcast live and can be viewed on Tree of Life’s Facebook page.

Following Floyd’s death during his arrest by police in Minneapolis, Myers struggled with how best to take action, he told the Chronicle.

“The list of potential things to do is immense,” Myers said.

While scouring social media, the rabbi encountered numerous causes and activities, but as opposed to following recommendations from strangers, Myers reached out to Manning, a friend who comforted him after the October 27, 2018 murders at the Tree of Life building. In 2015, Manning’s church also was attacked by a white supremacist, who murdered nine African American worshippers.

“I've come to learn over these past 19 months that we need to learn to listen to the voices of the victims,” said the rabbi. “Shouldn’t it be best to hear from those who are suffering?”

Myers posed the idea for a “Conversation Between Friends” to the pastor.

“One of the things that allowed me to make that quick decision was just the way that Rabbi and I have talked through the years, and our relationship,” Manning told the Chronicle. “A lot of times you have those within the white community who will kind of superficially come to you and say, ‘Let's talk about race, you know, etcetera, etcetera,’ but there was a genuine desire to hear, and to listen, and to allow for the thoughts or the experiences — while be it painful — to help people understand.”

Manning told Myers, and listeners of the conversation, about two personal experiences with racism.

Years ago, after performing with his college band in a Thanksgiving Day parade, Manning searched for his mother. While walking through a car dealer’s lot, Manning was stopped by a police officer, who repeatedly asked about his purposes on the premises. Despite explaining that he was simply looking for his family, and that he had just performed in the nearby parade, the officer took Manning’s identification. Eventually, the officer returned and allowed Manning to continue searching for his mother.

Decades later, while driving home from a court proceeding regarding the June 17, 2015 killing of parishioners at Mother Emanuel, Manning was stopped by a police officer for possessing expired tags. Only after explaining to the officer who he was, and that he had the city’s mayor and police chief “on speed dial,” did the officer’s tone change.

Manning said that he was able to share those stories with Myers because there is a “trust” between them. The relationship, continued the pastor, is one in which he can express his thoughts on race and his fears as a father, knowing full well that Myers may have no idea what it’s like to worry about a 23-year-old African American son.

As parents, “you have to talk about the birds and the bees,” but there’s another talk “within the African American community,” said Manning. You tell your child that in the event of being pulled over by the police to “make sure you’re polite. Make sure you’re not threatening. And by all means, don’t reach for anything. Put your hands on the steering wheel and then ask for permission to do certain things. That’s the talk.”

When there’s trust between people it’s possible to be there for one another, even when the parties believe, practice or look nothing alike, explained Manning.

If a relationship is predicated on trust and respect then there is an ability to question one another without fear, the rabbi noted.

“You have to be willing to be brave. Trust your instincts, have your faith guide you to move in what you think is the right direction, but not be afraid to either fail or have criticism about it,” said the rabbi.

“A lot of times, it's more or less just asking the hard questions,” said Manning. “And then of course listening, actively listening, not passively listening.” Doing so may generate “an opportunity to ask yourself the question, ‘How would I respond to an officer who comes or pulls me over? Am I fearful for my life?’”

It is important for communication to be open, and that can begin by turning to another and saying, “I may not be able to fully understand, but help me to understand. I want to listen. I want to hear how my actions, my emails, whatever the case may be, may have been received by you,” said Manning. “I think a lot of times we forget that, even from the Proverbs perspective, we should be able to reason with one another and we should be able to share with one another, because we can meet each other on the plane of humanity.”

Through this, “the heart changes” and once it does “actions change,” continued the pastor. “I think a lot of times, even in this season that we're in, we have to build relationships. We have to build meaningful relationships.” Doing so yields “an honest conversation. And then, when you respect each other, you meet each other at a different place and you can accomplish a lot more.” PJC