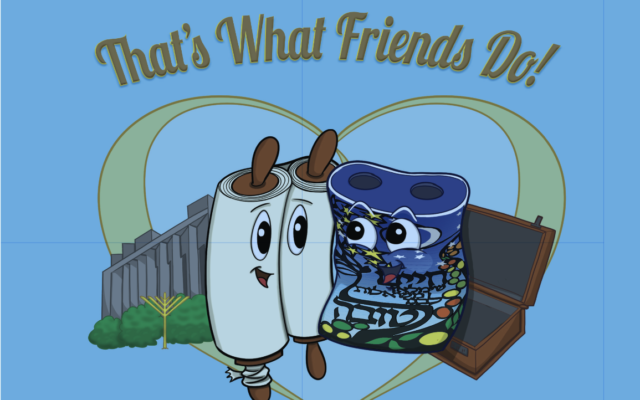 Though Cantor Steven Stoehr prays at a Congregation Beth Shalom in Northbrook, Illinois, and not at the corner of Beacon and Shady avenues, he resolutely identifies as a Pittsburgher.

Born and raised in Squirrel Hill, Stoehr attended Hillel Academy and Taylor Allderdice High School. He went to the University of Pittsburgh and was mentored as a hazzan by the late, great Cantor Moshe Taube, a staple at Pittsburgh’s Beth Shalom for four decades.

So, when anti-Semitism rocked Pittsburgh in the form of the Oct. 27, 2018, synagogue shooting, he did what came naturally: He helped out.

Stoehr — whose grandfather attended services at Tree of Life, and whose parents were married there — helped commission a new Torah mantle to replace the one damaged in the attack. Now, the story of the mantle and its journey throughout the U.S. has inspired a book for children, “That’s What Friends Do.” In the book, which Stoehr wrote and Amber Leigh Luecke illustrated, a Torah scroll present at the synagogue during the attack discovers the meaning of friendship when a new cover is gifted to him by friends of the synagogue.

Stoehr, whose congregation today is based about 40 minutes outside of Chicago, said it’s important and relevant that he’s sharing the story of the Torah mantle with a younger generation.
“People use historical moments to teach kids about life,” he said. “The country has been polarized — not just politically, it’s not a partisan view. There’s just so much hatred. So, what do you do? You start with the children.”

To craft the book, Stoehr said he took a page out of the book of another Pittsburgh icon: Mr. Rogers.

“I wanted to write a little book that showed the world is a much nicer place than it seems to be,” Stoehr said. “Kids have to learn that even a Torah and a cover can become friends and make a difference, too.” PJC