If Jeff Finkelstein wasn’t well-traveled before becoming president and CEO of the Jewish Federation of Greater Pittsburgh, he’s certainly made up for lost time during the 18 years he has led the organization.

In the last year alone, he spent time in Poland during the early days of Russia’s invasion of Ukraine, witnessing the plight of Jewish refugees; led Federation’s Mega Mission to Israel, visiting Tel Aviv, Haifa, Jerusalem and Karmiel Misgav; and shepherded some of the Mega Mission members to one of the newest Jewish communities in the United Arab Emirates.

It’s his latest trip, though, to Ethiopia, that Finkelstein called “one of the most impactful experiences of my life.”

Finkelstein traveled with more than 50 other Jewish leaders, including Pittsburgh Federation Treasurer Gilbert Schneider and partners from the Jewish Federations of North America and the Jewish Agency for Israel, spending time in both Gonder and Addis Ababa.

Finkelstein wrote of the extreme poverty he saw in a pre-Shabbat email he sent to the Pittsburgh Jewish community after his return to America.

“The poverty and squalor in which these individuals and families were living was like nothing I have ever witnessed,” he wrote. “We visited with one family in their home in Gonder. They live in a single room in a mud walled building with no running water. They have no refrigerator or oven, just some coal they use to make coffee and cook. Five of them cram in this single room leaving little additional space for anything else.”

The family was waiting to make aliyah at a Struggle to Save Ethiopian Jewry compound, something Federations across the country have committed to support. Both aliyah and kelitah — the entering and absorption of Jewish immigrants and refugees from the African nation — are facilitated by the Jewish Agency.

Ethiopia is a landlocked country in the horn of Africa. It is primarily a Christian nation, but some have conjectured that the Muslim population, which accounted for 34% of the country’s population in 2007, has become the dominant religion.

For purposes of aliyah, Finkelstein said Israel has identified a group of 3,000 Ethiopian Jews, but the total number of Ethiopians who self-identify as part of Bet Israel, the house of Israel, could include an additional 12,000 people.

The history of Ethiopian Jewry and its relationship to Israel is fraught with challenges: who is — or isn’t — Jewish; students illegally overstaying visas in the 1960s; forced conversions; two historic mass aliyahs, Operation Moses and Operation Solomon; and prejudice against some who immigrated to Israel.

Despite the struggles in the previous century, some of which continue to this day, Ethiopian Jews are anxious to create a life in Israel.

“What we heard from most people,” Finkelstein said, “is there’s been this generational desire for Jerusalem.”

He saw that desire firsthand when he accompanied more than 200 olim, or immigrants, from Ethiopia to their new homeland.

Finkelstein said the trip was different than ones he experienced with others making aliyah; for instance, he previously accompanied Soviet Jews to Israel. Those Jews, he explained, were coming from modern societies. The Ethiopian community, though, was experiencing many firsts.

“Most of these people have never been on an airplane before. And they’re leaving their homes, their home environment forever. I just think this one is very different,” he said.

It wasn’t just the Ethiopians who experienced something new on the trip: Finkelstein said he had never flown to Israel from the south.

“We crossed the Sinai, the Suez Canal. I was watching the map on the screen,” he said. “When we came over the Jordan River, everyone on the plane started applauding. They knew where they were. I’m getting shivers now. It was amazing. And when the plane flew out over the Mediterranean to make its landing at Ben Gurion, the whole time people were screaming and singing and cheering. When we landed, more erupted.” 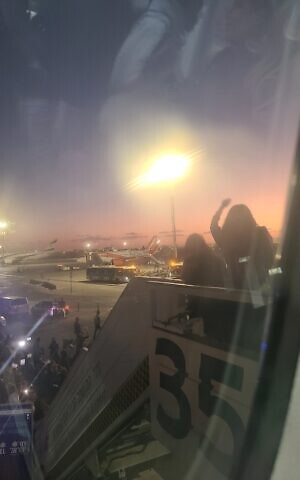 New olim raised their hands in triumph and cheered as they disembarked a plane from Ethiopia to Israel. Photo by Jeff Finkelstein.

Occupying seat 1A, Finkelstein was able to watch as the future Israelis exited the plane, going down the stairs with their hands raised and cheering.

The journey to Israel was complete, but Finkelstein doesn’t discount the journey ahead for the olim.

At the Ethiopian airport, Finkelstein said, some of the group met with one of the Operation Solomon architects, Micha Feldman, known by the Ethiopian Jewish community as Abba Micha or Father Micha.

“He touched them on the forehead, which is a very cultural thing to do in Ethiopia. He said to them, ‘the toughest part is coming.’ The flight is the easy part. The absorption into Israel society is the really difficult part,” Finkelstein said.

Unlike other Jewish immigrants who are more familiar with Jewish society, the new olim will now spend up to two-and-a-half years in absorption centers learning not just Hebrew and taking conversion classes but also learning lessons important to living in a modern society — vocational skills and how to do tasks like banking.

Federations across the country have collectively committed to raising $9 million to help the Jewish Agency with the process of assisting the Ethiopians entering Israel. Five million dollars will go toward aliyah, Finkelstein said, and $4 million toward the SSEJ compound, specifically for nutrition and security.

The importance of helping Ethiopian Jews make aliyah was highlighted during a trip to a Jewish cemetery in a village near Gonder. There is a memorial there dedicated to the Ethiopian Jews who attempted to escape to Sudan in the 1990s.

“A lot of people lost their lives on that trek, trying to make their way to Jerusalem,” Finkelstein said. While we have the opportunity to help this group, we need to grab hold of it, so that they don’t end up like that.” PJC