Despite espousing different political ideologies, Lou and Amy Weiss have been married for 40 years. Photo provided by Lou Weiss.

Despite their political differences, the pair, who recently celebrated their 40th anniversary, exhibit all the hallmarks of a successful marriage: they each enjoy the other’s company, are quick to laugh while poking fun at one another, have four adult children and – rather than complete one another’s sentences – interrupt to make a point or clarify an opinion.

Although the ideological differences might have ruined other relationships, Lou made it clear that Amy’s political beliefs had very little sway over how he saw her.

“She is so good looking that she could have been Pol Pot’s daughter and I would have asked her to marry me,” he said with a laugh.

Amy recommends one piece of advice each time they’re about to go out with friends: “I give him a pep talk,” she said. “Just don’t be yourself.”

The two met as students at Taylor Allderdice High School in Squirrel Hill.

“I was in tenth grade,” said Amy, “and was best friends with Lou’s sister. I used to hang around their house. I have to admit, I had a crush on him.”

“She finally wore me down,” Lou said, interrupting Amy’s story.

Lou credits a college class for helping to shape his political ideology.

It was during the 1980 presidential campaign that Lou and Amy learned they had different political leanings.

“That’s probably when we realized, because I didn’t vote for Reagan,” said Amy.

Lou has voted Republican in each subsequent presidential election with two notable exceptions.

“I voted for Bill Clinton once because I thought he would be good for Israel,” Lou said. “He turned out to be disappointing in many ways.”

In the most recent election, Lou wrote in his wife’s name rather than pull the lever for Donald Trump or Hillary Clinton. The reason? “She threatened to go on a sex strike,” said Lou. 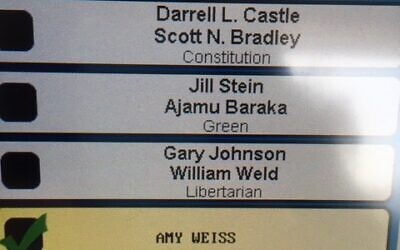 Rather than vote for Donald Trump, Lou Weiss wrote in his wife, Amy, in the last presidential election. Photo by Lou Weiss.

Amy broke into that oft repeated anecdote, asking her husband: “Now that he’s been in there for three years, aren’t you proud stating you didn’t vote for him?”

After replying “Yes,” Lou was quick to qualify his opinion.

“I think Trump has done some real good,” he said. “ He’s been absolutely terrific on Israel and the economy, before COVID, he was great. Black and Hispanic unemployment was at an all-time low and I happen to like some of his judicial nominees.”

“So, he moved the embassy [in Israel], big deal,” Amy argued, rolling her eyes.

The Weiss patriarch said that for the upcoming election he will most likely “vote for the candidate I’ve been sleeping with for the last 40 years.”

Whatever divide might exist between the two, the couple find harmony in their belief that a politician’s views on Israel matter.

“Personally, I’m a conservative but I’ve chosen to support those candidates that are good on the issue [of Israel],” Lou said. “That is my litmus test.”

“I agree, Israel is one of my most important issues,” said Amy, “but we have a different perspective. I feel the people I’ve voted for have been very pro-Israel. Barack Obama was a bit of a disappointment because of the Iran deal,” she conceded, “but his platform was definitely pro-Israel.”

Another point the pair appear to agree on is the use of face masks in public spaces.

And though they may be reflected through different political prisms, Lou pointed out that “our shared values, in terms of living our lives and raising our children are spot on.”

The pair’s divergent opinions don’t travel far outside of the political arena, although Amy is quick to state that Lou is “a little conservative” with his clothing choices.

“He wears a lot of Brooks Brothers button down Oxford shirts,” she noted. “That’s a sign of something I should have seen early on.”

“I take pride in being clothed by the same company that made the inaugural coat for Abraham Lincoln, the first Republican president,” Lou explained.

The couple has four daughters: Bari, The former New York Times op-ed staff editor and writer; Casey, a teacher at Colfax Elementary and Middle School; Molly, who works with Amy in the family’s carpet business, Weisslines; and Suzy, a reporter at the New York Post. Amy pointed out that Molly “was recently married in a COVID wedding in our backyard with 13 guests.”

Judaism provided a baseline for the family, both in politics and their personal life, even if they see it through different perspectives.

“It really affects my views,” Lou stated. “The policies many liberal Jews acquiesce to for the general public are things they would never abide by in their own homes.”

As an example, he cites Maimonides’s ladder of Tzedakah. “The number one highest thing you can do for someone is give them a job. So, Trump might not be so great, but the economy is growing. He’s giving people jobs. That’s the number one form of charity. That’s more important to me than increasing welfare benefits.”

Amy cites Jewish beliefs including “that which is hateful to you, do not do to another,” as foundational. “I hear a lot of Republicans talking loudly about what’s wrong, but I don’t see them coming up with solutions that are doable.”

“I remember calling my mother and telling her, ‘Thank you for raising me in an incredibly Jewish household, even if it was never identified as such,’” Lou said. “We never had Shabbat dinner, went to shul a few times a year, but we were taught to judge people generously, a Jewish idea; to take people as they come, a Jewish idea; love for the stranger, mentioned in the Torah 36 times. All these things we were both raised with even though they weren’t identified as Jewish ideas, but they absolutely are. Our country and our founding documents are suffused with Jewish ideas. It’s a very Jewish country whether people know it or not.” PJC