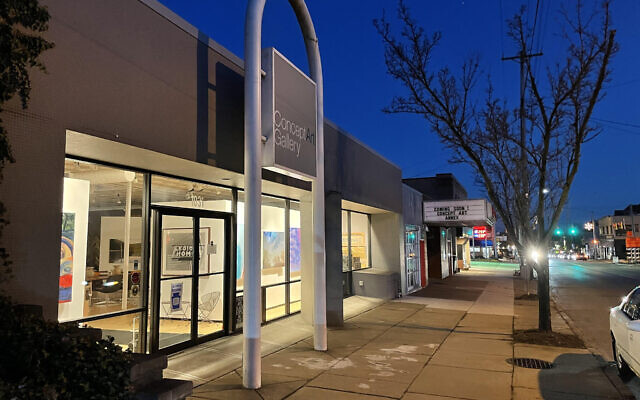 The possibility of working with more new and emerging artist excites Sam Berkovitz.

Berkovitz and Alison Oehler are the co-owners of Concept Art Gallery on South Braddock Avenue in Regent Square. The pair recently purchased the Regent Square Theater, next door to the gallery, which has been closed since 2019.

“We needed more space to do a lot of what we wanted to do,” Berkovitz said.

The gallery’s current space, he explained, didn’t work well for showcasing new and existing artists because it was too large, and the preparation time required for the installations was more complicated.

The former theater, though, will offer the opportunity to create two new project spaces for just this purpose.

“Smaller galleries are more appropriate for this,” Berkovitz said, “and they can be more like a pop-up exhibition.”

“It will allow us to do more exhibitions than we’ve ever been able to when the only option was to take over the gallery space,” co-owner Oehler said.

The enlarged footprint will also allow for additional offices, another exhibition space in the theater’s former lobby, more room for storage and a photo studio. Both the extra space and photo studio are important for the gallery’s auction business, which has thrived during the COVID-19 pandemic.

The construction, which will include a pass-through connecting the two buildings, is expected to begin in about six months and take a year to complete, which means it will be ready as Concept Art Gallery celebrates its 50th anniversary.

Launched on Forbes Avenue in 1972 by Berkovitz’s parents, Mel and Carolyn, the gallery has grown over the decades.
“When it opened, it was more about decoration for the home,” he said.

By the mid-’80s, the space had moved to its current location and its focus shifted to the corporate art market. The gallery began doing auctions when a managing partner at one of the gallery’s corporate clients grew unhappy with its art collection, and Berkovitz offered to help auction it off.

Augmenting the gallery’s sales of established local, national and international artists, the auction business has grown over the last few decades and has helped during the pandemic.

“We were very fortunate because our business, especially our auction business, converted to more and more digital sales and that was really augmented last year,” Berkovitz said “We really held our own.”

Now, Berkovitz and Oehler are looking forward to welcoming patrons on more than their current “by-appointment-only” schedule.

“We haven’t been able to have any openings during the pandemic,” Berkovitz said, “but people are still absolutely interested. That’s part of the excitement over the project spaces that we’re hoping to stimulate, you know, to get new and exciting talent in front of people’s eyes.”

The work of selecting the artists shown in the expanded galleries will fall to Oehler, who started with the gallery as an intern in 2013.

“I’m envisioning all sort of interesting projects,” she said.

The gallery is currently accepting open-call submissions for “Full Circle,” an exhibit opening this summer.

“It’s a response to the notion of the circle as a shape and a metaphor,” Oehler explained, adding she hopes it will serve as an introduction to the gallery for new artists.

Berkovitz is pleased about the expansion.

“It’s great because what is allows us to do as a gallery is follow that passion and for all of us to make a living from it and do something more than selling widgets,” he said. “We’re selling things we have strong feelings about. It’s an affirmation of our taste, so it’s really very exciting.

“The major changes the gallery has gone through and the evolution of it — it’s nothing I envisioned in terms of the way things would gravitate,” he added. “It’s a big surprise.” PJC