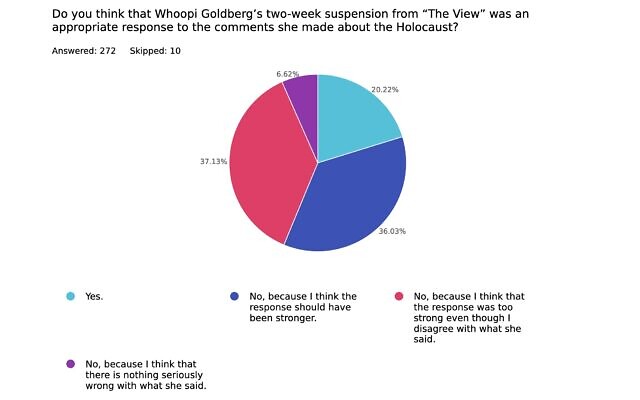 Instead, devoting a “The View” program with experts on the subject of the Holocaust and racism to discuss how she was wrong would have been an important teaching moment for her and many viewers.

It’s not about the loss of a paycheck; rather, it is about the message sent. Those that have an open forum must think before they speak.

She was right: Jews are not a race. She was wrong: Jews have been and are frequent victims of racism.

This was a teachable moment about accepting apologies.

No, because she apologized, learned and set the record straight immediately. Her comments were not hateful, but incorrect as to the facts. Understandably so, in light of her background. To shame or punish her further looks ridiculous and makes Jews look vindictive. Seeking to educate the public about the true facts would have been much better.

Ms. Goldberg is a very well-educated, astute woman. Her comments cannot be explained as mere ignorance of the topic.

Whoopi apologized and admitted her lack of knowledge. We need less cancel and more education.

She should have been fired.

The show is called “The View,” and she merely gave her view. So childish to be “timed out” like a child!

She needs to be educated. What was the point of the suspension? What did she learn during the suspension? Did she hear first-hand accounts from any survivors? I hope she has become more sensitive and learns that it was about race and dehumanization.

I wish we’d stop trying to silence everyone we disagree with.

Her follow-up comments showed that she listened and learned from the experience. She now has an opportunity to spread great good by discussing her lack of knowledge and understanding, and helping educate her listeners by sharing the truth about the Holocaust. PJC