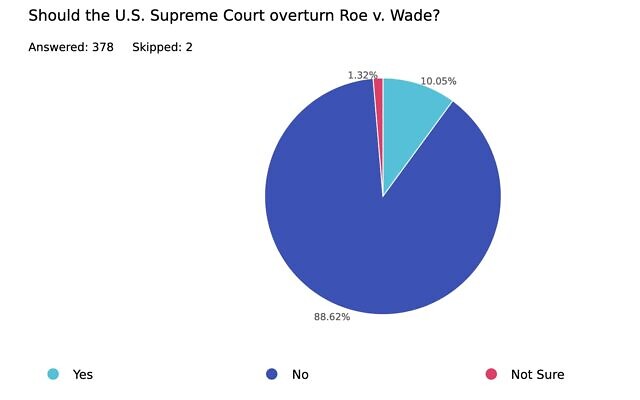 Last week, the Chronicle asked its readers in an electronic poll the following question: “Should the U.S. Supreme Court overturn Roe v. Wade?” Of the 380 people who responded, 89% said no, and 10% said yes. Just 1% said they weren’t sure. One hundred people submitted comments. A few follow.

Having an abortion is a personal decision, not a government regulation. I’m sure that no one does it lightly.

This ruling does not address the mother’s well-being. Should include that the father is responsible for child support until 18. Rich women will be able to travel to get an abortion. Poor women will not have the same choices.

No, but it seems the crime of releasing the court’s view was done purposely to enflame and activate a voter block just so they keep their power — because they are losing it.

If the final opinion is consistent with the leaked draft, it will serve as proof positive that the Supreme Court has become nothing more than a political pawn and has lost whatever minimal credibility and integrity remained after Bush v. Gore. Could there be a more fundamental right than the right to privacy?

It is NOT making abortion illegal. It is simply returning the power to each individual state to make the determination.

This act of denying women’s rights is only the beginning. Women will become second-class citizens again. This is truly horrific.

While I have mixed feelings on this and try to understand a woman’s decision to terminate a pregnancy, it still seems to minimize the value of a life.

This could create a situation where halachic decisions are in conflict with civil law, violating Jews’ religious rights.

Abortion should not be used as a regular method of birth control. Having said that, there is a time when a woman should have access to it — for instance, rape and incest. There are many circumstances to consider.

There is no constitutional right to an abortion. Even Ruth Bader Ginsburg expressed concern over the legitimacy of the decision. This is not a pro-life/ pro-choice issue. It’s an issue of judicial overreach. The matter should go back to the states or the legislature where it properly belongs.

I’m 74, and I said it all in the 60s. The younger generation needs to step up instead of just posting about it on social media. We are going backwards!

We know what it was like when abortion wasn’t legal. It was horrific for women’s health and for their families and partners. Women will die unnecessarily. Emergency rooms will be filled with women who have sepsis from trying to abort themselves in states where doctors can be punished and jailed. It will be the Twilight Zone.

If Roe v. Wade is overturned then what other personal issues will be legislated by the government — contraception, interracial or same sex marriage?