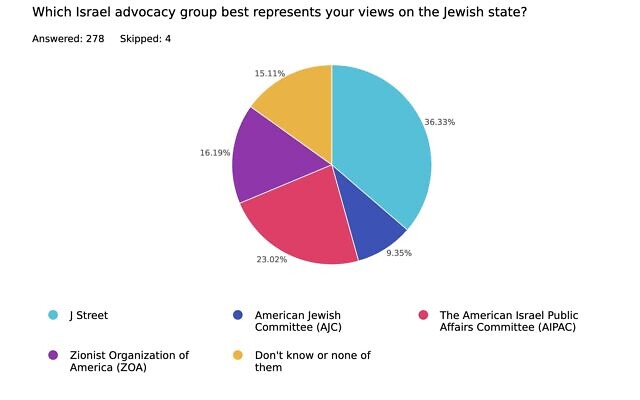 Last week, the Chronicle asked its readers in an electronic poll the following question: “Which Israel advocacy group best represents your views on the Jewish state?”
Responses to this question came in a way that is not typical for the Chronicle’s weekly poll. Whereas the vast majority of responses usually come in soon after our Wednesday email blast, this week there was an unprecedented surge of responses over the weekend; most of those responses said they identified with J Street.
The Chronicle would like to remind our readers that the results of our weekly polls are not statistically definitive, and may not be an accurate reflection of the views of the broader Jewish community.
Of the 282 people who responded to this week’s poll, 36% said “J Street”; 23% said “AIPAC”; 16% said “ZOA”; 9% said “AJC”; and 15% said they don’t know, or none of them. Sixty people submitted comments. A few follow.

J Street does not advocate for Israel.

I am angered by AIPAC’s anti-progressive strategy in American politics.

ZOA is one of only a couple of old-line Jewish organizations to maintain its purpose of standing behind Israel and the Jewish people.

My relationship to Israel is mainly positive, but I do not appreciate the treatment of Palestinians.

AIPAC is the most balanced group.

ZOA is the only Jewish organization that reports on Biden’s antisemitic appointments.

AIPAC has a long, long history of standing up for Jews and Israel when many of our co-religionists ran in the other direction.

They all are Zionist. I am not. None represent me.

ZOA does an excellent job of scanning the news about Israel and listening to what is said about Israel, and points out when there are inaccuracies and asks for the facts to be repeated honestly.

To even suggest that J Street is an Israel advocacy group is laughable.

I am a committed Zionist. I am also committed to justice and equity in Israel. I oppose BDS, I oppose labeling of Israel as an apartheid state. I strongly disagree with both of those views. But I also believe that Israel has not done right by the Palestinians who live in the West Bank and Gaza, and must do better. J Street best represents my views, but I am not wholly supportive of all of J Street’s positions either.

I am still shaking my head in dismay that the AIPAC super PAC, misnamed the “United Democracy Project” has endorsed over 100 “Stop the Steal” Republicans. These are candidates who have endorsed or kept silent on the Jan. 6 insurrection.

Israel — indeed, the worldwide Jewish community — is poorly served by any person or organization that does not recognize the toxic effect of Israeli treatment of Palestinians on the West Bank and Gaza. If I had to pick a Jewish organization it would be Jewish Voice for Peace.

I think that J Street should address head on the question of what a two-state solution would look like and how it might be achieved.

If J Street gets more than 17%, it will destroy my faith in humanity. PJC