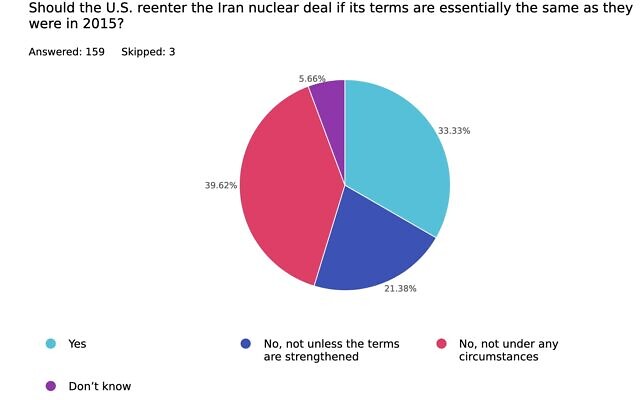 Last week, the Chronicle asked its readers in an electronic poll the following question: “Should the U.S. reenter the Iran nuclear deal if its terms are essentially the same as they were in 2015?” Of the 162 people who responded, 40% said, “No, not under any circumstances,” and 33% said “Yes.” Twenty-one percent said, “No, not unless the terms are strengthened.” Forty-one people submitted comments. A few follow.

The worst deal since Chamberlain’s “Peace in our time” deal with Hitler.

Buying us a few years isn’t sufficient. The issue is we can’t expect that if we elevate its stature Iran will become a good actor. It has proven over and over that it can’t be trusted and is not an honest partner.

The good enough shouldn’t be the enemy of the perfect. A good deal is better than no deal.

I am not an American ( I am a Canadian) so I really have no right to comment on American policy; however, since in this instance U.S. efforts affect not only Israel and its security but the rest of the world as well, the U.S. needs to stop playing “nice-nice” with dictatorships. Israel is the pawn in this instance and its ongoing security, indeed the security of the entire Middle East, is threatened. The Senate and Congress have to stop using Israel as a football. This is not a zero-sum game.

We must prevent Iran from having nuclear weapons. Both the current deal and the old deal do not accomplish that.

Even under the most optimistic scenario, any agreement that funnels more money into Iran’s coffers would only delay their efforts to produce nuclear weapons, not prevent them. In the interim, any such infusion of funds would enable and encourage their commitment to provide ever-increasing levels of financial support to terrorist organizations.

The nuclear deal was working before President Trump canceled it. Its main purpose was to prevent Iran to develop a nuclear bomb. The deal’s terms served this purpose.

Any action that might slow nuclear proliferation should be pursued vigorously.

Any advantage Iran gets to build/stockpile nuclear arms will only strengthen their ability to use them on us, Israel or other Democratic societies, or to eradicate minority populations or use as bargaining chips in building alliances. “Keep your enemies closer?” Not so sure on this one.

We should never have gotten out of it to begin with! Stronger terms would be an improvement but the deal is much better than no deal. PJC