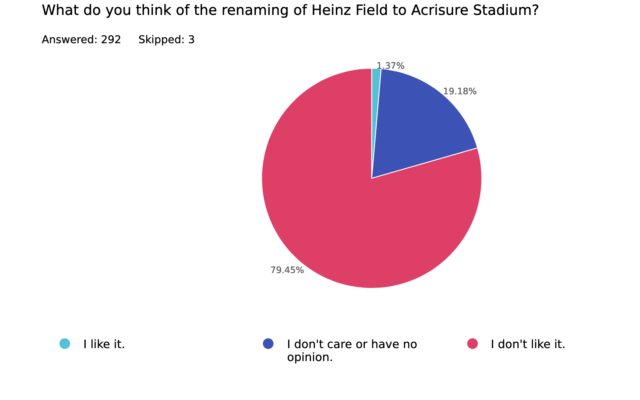 Last week, the Chronicle asked its readers in an electronic poll the following question: “What do you think of the renaming of Heinz Field to Acrisure Stadium?” Of the 296 people who responded, 79% said “I don’t like it”; 19% said “I don’t care or have no opinion”; and 1% said “I like it.” Comments were submitted by 100 people. A few follow.

Acrisure is an aggressive financial technology company with no personal relationship with Steelers fans and minimal connection to Pittsburgh. The name “Acrisure Stadium” is an unpleasant mouthful. I, for one, will keep calling it Heinz Field.

It does not matter at all to me which corporate entity uses the stadium as paid advertising.

What a terrible mistake. Surely there was a Pittsburgh-based company that could have done this.

Hate it! I’m disappointed that either Heinz did not step up or the Steelers wouldn’t work with them.

I never heard of the company and then when I looked it up it’s not even Pittsburgh-based! What a shame! So, what’s now going to happen to the “red zone“ when the ball is within the 20-yard line?

I understand the business end. But I’ll miss Heinz.

I think it should be named in honor of Rabbi Solomon B. Freehof.

Acrisure sounds like the trade name of prescription medication.

Will continue to call it Heinz Field for all eternity.

It will always be known as Starlake.

Loz em gain! The new name is not a great ketch up. More like a kvetch up! I say, let’s bottle the
whole issue up!

They can name it whatever the sponsor wants, but changing the official ketchup was a shonda.

Who cares as long as the Steelers are winners? PJC