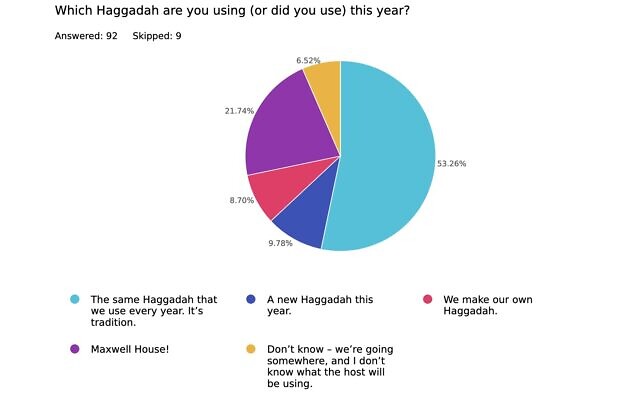 Last week, the Chronicle asked its readers in an electronic poll the following question: “Which Haggadah are you using (or did you use) this year?” Of the 101 people who responded, 53% said, “The same Haggadah we use every year. It’s tradition!” and 22% said they were using the Maxwell House Haggadah. Ten percent said they were using a new Haggadah this year and 9% said they made their own Haggadah. Thirty-three people submitted comments. A few follow.

We switched to the PJ Library Haggadah due to the growing number of kids at our family seder.

We use a children’s-style book that tells the stories well. We use it even though our children are now grown.

We have many kinds of Haggadot and pick one each night according to the whim of the moment. Not everyone at the table has the same one, which makes the seder more fun and allows for more commentary.

We have lots of Maxwell House and provide those for everyone, but in the end, people each choose their own from our extensive collection. I’ve been using the Artscroll Kids Haggadah lately, purely because of the large print!

We use traditional and modern Haggadot and then take things from the internet, as we do one traditional seder and one themed seder — depending on the age and interests of the guests — that is more topical.

I have created a Haggadah, bringing together aspects of many other Haggadahs that I find meaningful. It’s a fun process, though I need to delete some and not just add!

I still love the smell I get from the Maxwell House Haggadah. It brings bask such good memories of my Zeidie leading the service and falling asleep and all the grandkids hiding his teeth. What good memories. This was actually better than the afikomen.

We use the same “base” Haggadah each year but supplement with material from various others. We try to have something new each year, and sometimes guests bring other Haggadot too. We get variety, and we don’t have to buy a bunch of copies every time we find something new.

The one I’ve written is actually fairly traditional, but egalitarian too. I tweak it every few years. PJC