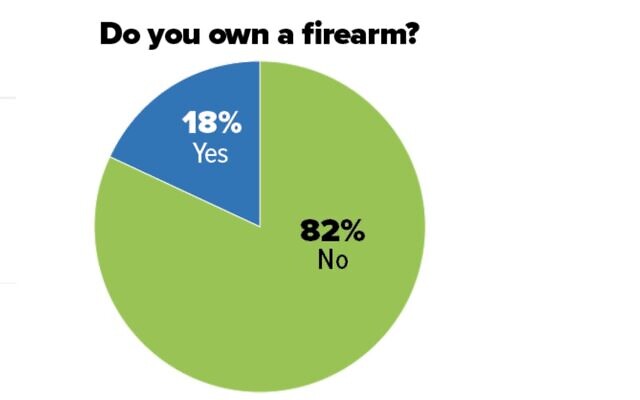 Last week, the Chronicle asked its readers in an electronic poll the following question: “Do you own a firearm?” Of the 361 people who responded, 82% said no and 18% said yes. Comments were submitted by 112 people. A few follow.

I’m sickened to my core by this entire gun issue.

Our son has a gun and I’m considering getting one. Jews must be able to defend themselves. It’s painful to have to say something this obvious.

I own several. All locked and secured. Yes, I have a concealed gun permit.

The Supreme Court is radically misconstruing the Constitution and it’s killing people. I support intense regulation of fire arms — no need for anyone to keep a gun in his or her house. No need for automatic weapons. There should be massive penalties for crimes committed with guns.

The Second Amendment should be repealed and all private gun ownership restricted to one hunting weapon per person.

I am not opposed to owning a small firearm for personal safety, but would only do so with proper training, which I don’t have.

I’d like to own one for protection in my home, but my father always said, “Don’t pull out a gun unless you intend to use it.” I see stories every once in a while of someone shooting who they think is an intruder, but is actually a child goofing around trying to jump out and scare someone. I don’t want to make a mistake so I choose not to have one.

It’s important for Jews to provide protection for their family when law enforcement is not present.

Guns should only be in the hands of licensed and stable individuals. Background checks and professional training should be required.

Except for military and police use, firearms of any kind should be outlawed and melted down.

Jews need protection. If our brothers were permitted to have them, the Holocaust would have been a lot tougher for the Germans.

I don’t own one but the thought has definitely crossed my mind. My partner would disown me even for that statement.

As the grandson of a generation who escaped and survived the Holocaust when I say, “Never again” I don’t mean just sending strongly worded emails to Congress or letters to the editor. This time, if attacked, at least some of the Jews will shoot back. We must defend ourselves,
responsibly. But we must be our own last line of defense. I am not in favor of a reversal of the right to defend ourselves. PJC