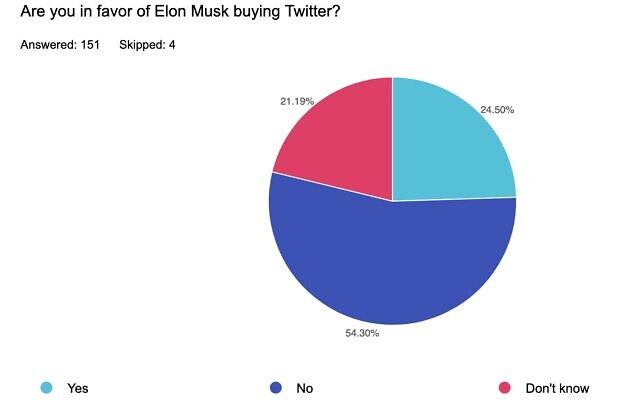 Last week, the Chronicle asked its readers in an electronic poll the following question: “Are you in favor of Elon Musk buying Twitter?” Of the 155 people who responded, 54% said no and 25% said yes. Twenty-one percent said they didn’t know. Forty-six people submitted comments. A few follow.

I’m for free speech but don’t want to see Trump back on Twitter.

Hopefully he would put an end to Twitter’s censorship of views they don’t like while censoring real hate speech.

Free speech is important to our society!

The super-rich shouldn’t have monopolies on media.

Finally, a breath of fresh air that will support First Amendment free speech rights instead of quashing anyone that does not conform to their Biden Presidential Protection Program platform. There is something wrong when big tech enables the terrorist mullahs of Iran as well as Putin’s criminal surrogates to post, while at the same time censoring a former president and conservatives.

Freedom of speech! I will risk being offended to live in a free speech society.

Honestly, who cares at this point!? Is there nothing more important in the world going on than whether some self-important billionaire interferes with social media? Excuse me, but innocent people are being slaughtered because today’s version of a czar says so, and millions have died because of a disease that some folks refuse to believe exists, and we’re supposed to care about what Elon Musk does? Please!

Free speech is embedded in America’s DNA. Most of the social media and technology companies stymie it in favor of one side. Elon will take Twitter and make it a real town hall.

I cannot emphasize the word “No” more strongly.

Many of us Twitter users have been vigilantly blocking and reporting bullying, uncivil and hate speech and found it has toned down its use online, at least for our individual accounts. I am concerned Mr. Musk’s “Free Speech” stand has a very different definition than ours.

The balance between allowing free speech and not allowing hate speech is subtle and nuanced, and alas, Elon Musk is neither. PJC